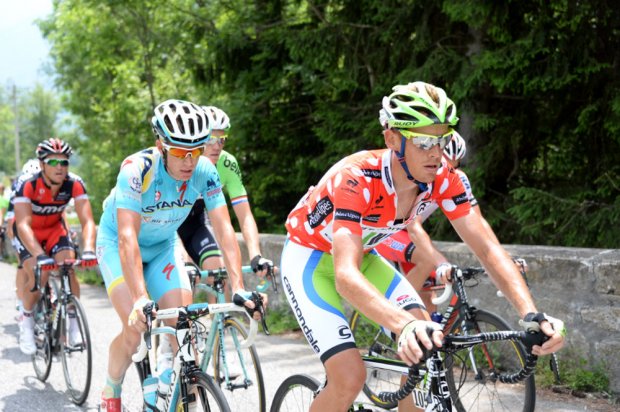 Thrilling finale awards Westra and Contador for their panache

While a Russian duo formed of Egor Silin and Yuriy Trofimov looked like being on their way to another triumph for Katusha, Lieuwe Westra took his revenge twenty-four hours after missing out on the stage win against Jan Bakelants in Poisy. The Dutchman imposed himself in the queen stage at Finhaut-Emosson but the most spectacular action occurred behind him when Alberto Contador attacked with two kilometers to go to dethrone Chris Froome and take the yellow jersey for eight seconds with one day to go into the 66th Critérium du Dauphiné.

Westra on the move again from the start

Westra a virtual leader after 100km of racing

It took more than fifty kilometers to Lieuwe Westra to move into the virtual lead of the Dauphiné. The Dutchman was 5.59 down on Chris Froome after stage 6. The breakaway reached an advantage of six minutes at km 105. They increased their lead to 7.45 at km 113 until Tinkoff-Saxo took over from Team Sky at the head of the peloton while a head wind was reported in the valley.

Westra emerges as a winner when Contador prevails over Froome

Trofimov was obviously hungry for more as he attacked seven kilometers before the col de la Forclaz and once again three kilometers away from the summit as Gallopin, Westra, Silin and Hesjedal were the last four climbers able to follow him. He was instructed by his team staff to wait for Silin in the downhill, so a duo from Katusha started climbing to Finhaut-Emosson. They looked like having bagged the stage victory but fatigue took its toll in the last kilometers and Westra had saved some energy to overtake them in extremis in the last 200 metres. At the same time, another was underway behind as Alberto Contador attacked Chris Froome with 2km to go. The motivated Spaniard and the injured Brit delivered a fabulous duel that resulted in a difference of eight seconds in favour of Contador on GC with one day to go.