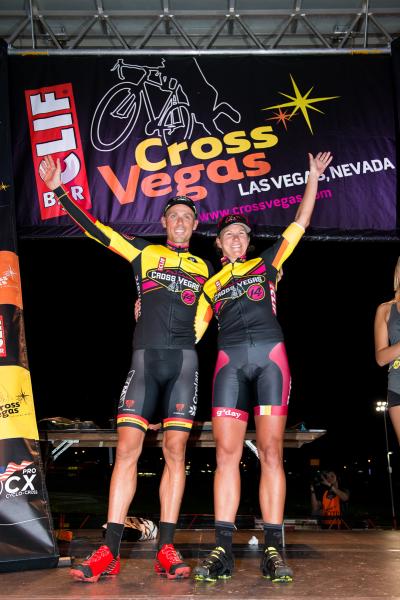 Belgian Champion Sven Nys claimed back-to-back victory at the Clif Bar CrossVegas on Saturday evening. An enthusiastic crowd cheered as the 2013 World Champion accelerated away from a select lead group on the final lap. Dutch Champion Lars van der Haar, a three-time competitor at CrossVegas and winner of the 2011 edition was second. American Champion Jeremy Powers rounded off the podium.

“It was a tactical race. I wanted to wait until the last two or three laps before the end to do something special. A big group in the front and it was always waiting, waiting but I felt myself really strong the whole race. I did a few accelerations to close the gap at the beginning of the race, and then I say okay if I can do this in the last lap, I can win if I don’t make any mistakes. It went like I hoped and I’m really happy with a victory here, my second one. It’s good for the motivation for the next races in Europe.” Nys (Crelan-AA Drink) stated.

Van der Haar (Shimano-Giant) added, “I know Sven pretty well, I know what he does, I know where he does it so I knew that I had to be in front before the barriers but he was still able to get across. Then he knew where my two worst corners were, and he took advantage of that.”

“I felt good enough to do something tonight, I just didn’t know what.” Powers (Rapha-Focus) said. “It’s good company to be with. It’s a good ride, at this time of the year it’s good for me.”

Tactics were at the forefront for the first major event of the cyclocross season. A few solo attacks were attempted in the early laps but no rider was able to stay away for long. Halfway through the race, a select group of 12 riders was at the front, testing and watching each other.

Van der Har explained, “In the middle of the race, I tried to close a gap, I saw that it was pretty easy to close the gap but it took a lot of energy so you had to be careful with your energy. Everyone was taking it a little bit calmer, seeing what everyone was capable of.”

The group shuffled and reformed until Nys put in his attack on the barriers. Powers concluded, “As soon as he went, boom boom over the barriers, he had five seconds. His technique obviously helped him there and then he rode away.”

American Meredith Miller sprinted ahead of Katerina Nash of he Czech Republic and American Champion Katie Compton to win the 2014 Clif Bar CrossVegas presented by Lazer.

“Helen (Wyman) (Kona Factory Racing) started fast,” stated Miller (Noosa Pro Cyclocross Team). “She is a very good starter but I know this race is a race of attrition. I knew that I had to just follow the right wheels. At one point, I had to jump across. Once I did I felt okay. I settled in and took a deep breath. I told myself to just stay with these awesome women.”

“The last sprint was the craziest part of the race. During the pre-ride, I told my friend that at the finish if you are not first you are last. I went into the sprint last. I kept trying to pass Katie. I almost took myself and her out. Being patient was the key because this grass takes it out of you. I waited to the very last minute to sprint.”

“I knew that I did not have the best legs today,” said Compton (Trek Factory Racing). “It’s a tactical race here. I was just waiting for the sprint. The last few turns we were all being aggressive and passing each other. I ended up leading in the last sprint. Meredith came around me like a rocket.”

The trio were joined by current World Mountain Bike Champion, Catherine Pendrel (Luna Pro Team), for most of the race. In the last lap Pendrel slipped on the wet grass and was quickly gapped by Miller, Nash, and Compton. She was unable to get back in the lead group. Miller, Nash (Luna Pro Team), and Compton stayed together for a bunch sprint to the finish.