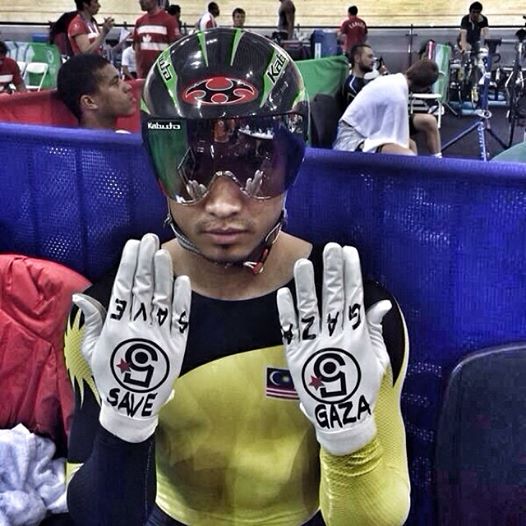 The Malaysian cyclist, Azizulhasni Awanghas, was warned by race officials for wearing gloves with “Save Gaza” written on them, while riding during the Commonwealth Games this week.

Awang, took part in Tuesday’s men’s sprint with the message written across the knuckles and the wrist of each glove, displaying them to cameras after he raced into the quarter-finals.

“He has had a strong reprimand from his team management and he has apologized,” the Commonwealth Games Federation chief executive Mike Hooper said.

“In apologizing profusely he now knows any repetition will see a removal of his accreditation. It is inappropriate for any form of protest in a Games venue; we respect everyone’s right to protest outwith.”

“I feel sorry to the people who misinterpret my message. There’s no such thing with political protest.

“It’s from the bottom of my heart to express humanitarian. Since when expressing humanitarian considered as political?

“Anyway, I apologize to those who think I’m doing wrong. I got a warning and still can race today but without my ‘Save Gaza’ glove.

“Thanks everyone for your support and really appreciate it. We all stand as a human.”

Awang wore plain gloves during the sprint races on the second day of the Games.