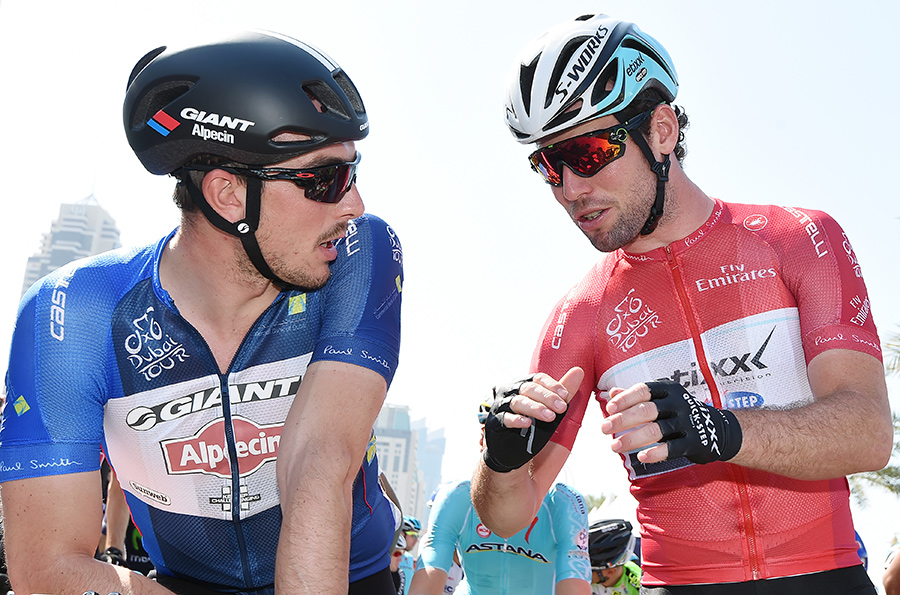 The Manxman was setup to perfection by his Etixx-QuickStep team during the final 500 meters, to beat Elia Viviani (Sky) and Juan José Lobato (Movistar) in another sprint finale.

“I’m over the moon,” said Cavendish, who paid tribute to his Etixx-QuickStep team and had some thinly-veiled words of criticism for Team Sky and Movistar. “We’re the only team who rode all week, even yesterday when it was mainly to honor the jersey. I was a bit frustrated with the other teams who’ve come here and haven’t raced, so I had a bit of fire in my belly.”

Today’s stage took off at a searing pace, with a breakaway group containing Manuele Boaro (Tinkoff-Saxo), Daniel Oss (BMC), Marco Canola (UnitedHealthcare), Francisco Mancebo (Skydive Dubai) and Maciej Paterski (CCC-Polsat), getting underway in the first part of the race. From there, the escapees succeeded in building up a considerable advantage of four minutes over the peloton.

However, after about 30 kilometers of racing, a determined peloton under the auspices of Giant-Alpecin and Etixx – began setting about reeling them in.

As the race headed into the final 20 kilometers, the breakaway was still holding into a sizable lead. Nevertheless, Oss decided to make a go of it alone. However, his efforts were short-lived, as the Italian rider was quickly pulled back in after just 2 kilometers of being out front.

A subsequent effort, alongside Canola in the final 6 kilometers, resulted in the same.

From there, the peloton came back together, with the race belonging to Etixx-QuickStep.

Indeed, as the race began winding up for its usual sprint finale, the duo of Renshaw-Cavendish already had a head start on the rest of the sprinters. And, despite a final effort by Ben Swift to lead out his teammate Viviani’s in the closing meters, Renshaw and Cavendish couldn’t be caught.