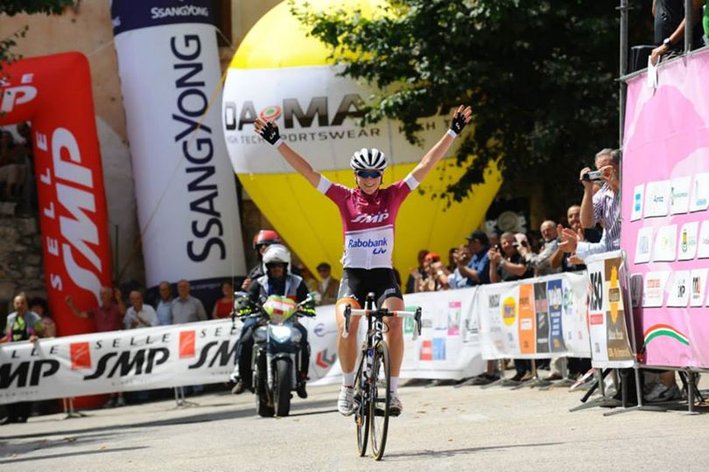 Van Vleuten attacked her breakaway companions during the final kilometer, and went on to win a solo victory.

Marianne Vos could only muster a fifth place finish in today’s race. However, it was enough to maintain her hold on the overall race lead.

“It was kind of an unexpected victory,” Van Vleuten told the media.  “This was not really the tactics we had discussed before but in the end it was an ideal scenario.”

Today’s stage featured a 125.3 kilometer route that was anything but flat – concluding with a final of the San Donato Val di Comino in the province of Lazio.

A sizable breakaway group of 15 riders, got underway after about an hour of racing. Among them were, Van Vleuten, yesterday’s stage winner Giorgia Bronzini, Julie Leth, Valentina Scandolara, Doris Schweizer and Elena Berlato. From there, the escapees bult up a moderate lead of a 1:35 over the main field.

With Van Vleuten in the break, Rao-Liv deciding to leave the pace setting to other teams back in the peloton. However, when the breakaway group reach the foot of the first serious climb, several riders fell off the pace. And, as the race tackled the final climb to San Donato Val di Comino, the breakaway group which now only contained Van Vleuten, Berlato, Schweizer and Hagiwara, who managed to bridge herself across from the peloton, held an advantage of less than half a minute over the chase.

Sensing the peloton closing in, Van Vleuten decided to attack her  breakaway companions during the final kilometer. Unable to respond to her attack, Van Vleuten went on the claim a solo victory, with a 10 second margin over her closest rival.

“It was very tense. I was the highest ranked rider in the breakaway but they attacked a lot, especially in the final 20 kilometers. I thought, can I counter these attacks? I thought they would come from behind, like Hagiwara had. We knew nothing about our time gap in the final so it was very tense”, said Van Vleuten.

Today’s victory was not only Van Vleuten’s second stage win, but it marked Rabo-Liv’s 3rd win out of 4 stages in this year’s Giro.

Rabo-Liv’s sports director, Koos Moerenhout, had this to say about his team’s performance:

“Yeah things are going well.” “We have three captains a bit higher up the overall but the breakaway went after 45 minutes. Annemiek was there so we didn’t work in the peloton, only in the beginning to canvass who else was up front. We left it to the others teams. And with Annemiek in this shape you know she can win the stage,” he concluded happily.

The Giro Rosa continues tomorrow with a 118 kilometer stage to Jesi, with a final climb less than 10 kilometers from the finish.