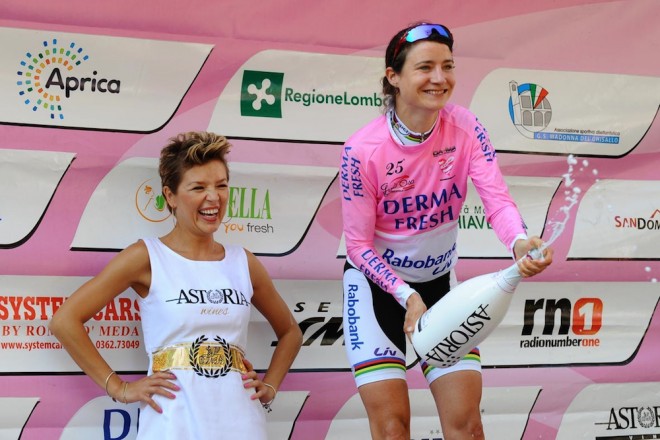 "The photo finish had to decide," Vos told the media. "Initially it seemed to be Lucinda but I eventually won by millimeters. These victories (it was Rabo-Liv’s fourth) make for a good atmosphere in the team."

Today’s mostly flat 118 kilometer stage saw the peloton travel north alongside the Adriatic sea to the municipality of Jesi.

A two-rider breakaway group containing Emilie Moberg (HiTec) and Yulia Ilinykh (Bizkaia Durango) eventually got underway. However, the duo did not get far before they were retrieved by the peloton.

From there, a subsequent escape group, including Polish time trial champion Eugenia Bujak, succeeded in riding clear. However, similarly, they too were also caught by the peloton – after about a hour of racing.

Shortly thereafter, the Russian rider Ilinykh commenced a solo attack of her own. And, with 15 kilometers remaining, and the only climb of the day still ahead, she continued to maintain a substantial two and half minute lead over the peloton. However, after riding on her own for approximately 60 kilometers, Ilinykh was eventually caught when she hit the streets of Jesi.

The final segment of today’s stage, involved a 700 meter uphill sprint, followed by a technical descent into Jesi. It was during the waning moments that Vos proved her prowess as a great champion, by nixing her rivals on the line by a matter of a few millimeters.

"The climb in the last ten kilometers didn’t make the difference," Vos said. The team decided not to to help to chase down Ilinykh. That was mainly down to Unitedhealthcare with sprinter Hannah Barnes.

"Ilinykh was no threat to the overall so we didn’t waste energy on the chase. We did want to be well-positioned and we were. It was Pauline who did the pace making on the hill and Annemiek piloted me through the turns before the last 300 meter straight line."

Vos continues to lead the overall classification, albeit humbly.

"Mara Abbott is still very strong uphill. She is at 2:34 now but last year I lost over four minutes to her. And Hitec is riding strong with Ashleigh Moolman and Elisa Longo Borghini. Claudia Lichtenberg is also someone to reckon with."