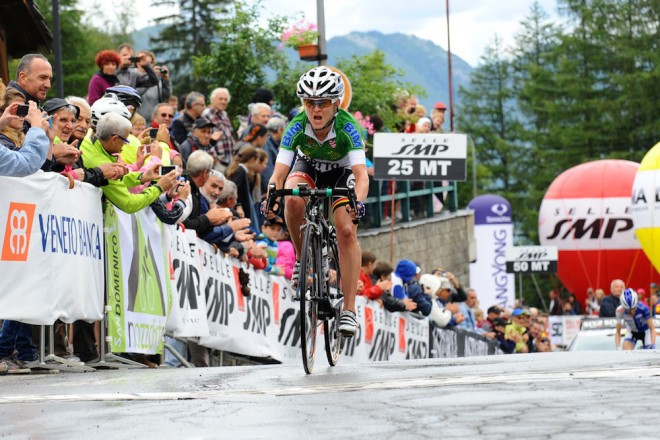 Emma Pooley claimed the ninth and final stage of this year’s Giro Rosa today, beating Rabo-Liv teammates, Pauline Ferrand-Prevot and Marianne Vos, to take a solo finish atop the climb of the Madonna del Ghisallo.

Meanwhile, Vos secured the overall title for the third time in her career, finishing 15 seconds ahead of Ferrand-Prevot and 1:32 ahead of Anna van der Breggen who finished in third at 1:32 minutes back.

“We didn’t speak of rivals within the team,” Vos told the media.  “The pink jersey was the most important. We shouldn’t ride each other out of contention. Our rivals were outside the team with Abbott as biggest threat.”

There were several attempts during the first few kilometers to try and form a breakaway group, but to no avail.

Vos claimed the first intermediate sprint of the day, which further maintained her advantage over teammate, Ferrand Prevot, by picking up an additional two seconds.

As the race headed into the final climb of the Madonna del Ghisallo, the Rabo-Liv team made a concerted effort to isolate Abbott, and protect it’s leader – Vos.

“We discussed that our riders would not attack each other,” Rabo-Liv sports director Koos Moerenhout said. “Our tactics were based on Mara Abbott. She tried but didn’t get away.”

“Mara is a really strong rider and the biggest threat to our classification,” said Vos. Last year, Vos lost the Giro to the American rider in two consecutive mountain stages. “I knew that I was stronger than last year and I had such a great team around me that I didn’t need to worry.”

Abbott was part of the first group of riders to hit the Madonna del Ghisallo, along with Vos, Ferrand Prevot, Van der Breggen and Pooley.

From there, Pooley attacked along the steep sections of the climb, subsequently leaving her companions as far back as almost half a minute – to claim the stage.

Rabo-Liv dominated this year’s Giro Rosa with no fewer than six stage wins, ultimately securing the first three positions on the final podium.

“Riding alongside Pauline and Anna makes me better too. It keeps me focussed. But it’s not only about Pauline, Anna, me or Annemiek but before we can play a role in the final Iris Slappendel, Roxane Knetemann, Kasia Niewiadoma and our road captain Lucinda Brand play a very important role in keeping us safe, out of the wind. Most people don’t see the work they do in every stage. They counter the attacks and make that I don’t have to worry. That is hugely important,” Vos said.

“I am proud of the girls,” he said. “The Giro Rosa is the women’s cycling race of the year and after our failed mission of last year, we wanted the victory back. Marianne was really good but our team was really disciplined. Everyone did great, from our captains to Kasia Niewiadoma who made her debut.”