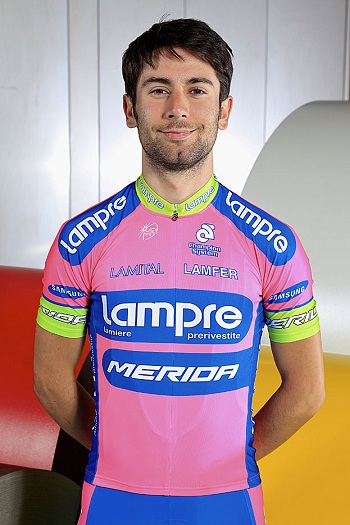 Diego Ullissi claimed stage 5 of Giro d’Italia today, with a perfectly timed, late attack during the final kilometer – to win the first mountain top finish in this year’s race in Viggiano.

Cadel Evans finished in second place, with Julian Arredondo Moreno rounding out the podium in third – both one second behind Ulissi.

Meanwhile, Michael Matthews managed to retain his overall lead, after a determined effort to stay near the front during the final kilometer of  today’ stage.

Today’s 203-kilometer stage began in Taranto, and ended with a category 4 climb into Viggiano.

A small group of riders containing Evans, Matthews, Edvald Boasson Hagen, and Nicolas Roche, battled it out during the race’s final kilometer.

With 500 meters remaining, Evans attempted an attack of his own. However, just as the Norwegian rider looked poised for victory, Ulissi came up the left side of the road with a blast of acceleration to assume the lead. And, from there, the Italian rider successfully held-off his rivals to the finish – to seize the stage win.

The Giro d’Italia continues tomorrow, with a 247 kilometer stage that ends with the famous climb of the Abbey of Montecassino – near Naples. Tomorrow’s stage marks the second longest in this year’s event.