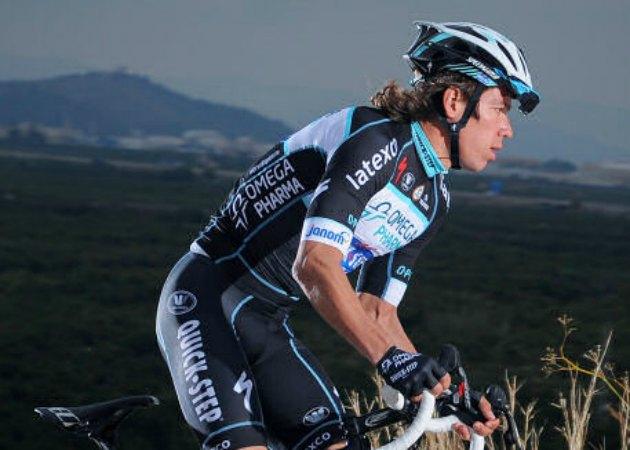 Evans ceded his 57-second advantage over Uran, after he lost time during today’s ITT. The Australian rider now sits in second place overall at 37 seconds back, while Rafal Majka managed to hold onto his third place position at 1:52 behind Uran.

Uran set the fastest time of 57:34 along today’s 41.9 kilometer course from Barbaresco to  Barolo – 1:17 faster than his closest rival – Diego Ulissi.

“I worked a lot on my time trial, spending time in the wind tunnel over the winter,” Uran said. “Today surpassed my expectations. I cannot believe I won the stage and took the pink jersey. It’s too early to say the race is over. We still have not raced the hardest mountains yet. The most difficult part of the Giro is still to come. My team has given me great support so far.”

Thomas De Gendt topped the leader’s board for most of today’s time trial event. However, Ulissi later eclipsed the Belgian rider with a time that was 50 seconds faster. From there, several other riders would surpass De Gendt’s time as well – subsequently pushing him further down the board.

Things did not goes as planned for Evans however. With each check point, the race leader was seen struggling to stay on form. And, at one point, he nearly slid off the road while navigating a short hill during the final third of the race – only to then find himself off course and onto a dirt shoulder before making his way back on the course. This mishap ultimately cost Evans the maglia rosa.

“Cadel didn’t have the time trial we had hoped. He was on his limit and seemed to have some problems on the wet roads,” said Fabio Baldato, BMC director. “This changes things for us, and now we will have to attack. The Giro is not over. Hats off to Uran, he rode very well today. The big mountains will decide everything.”

Meanwhile, Nairo Quintana, who has been suffering with injury and illness, finished 13th in today’s stage – 2:41 down on Uran. He now holds 6th place in the overall GC – at 3:29 behind the leader.

“It was a long time trial, I tried to hang in there as best I could,” Quintana said. “I wasn’t as good as I had hoped, I had some problems with my breathing, not with my legs. I hope to recuperate in the coming days; the hardest days are still to come. We hope we didn’t lose too much time in the time trial. I couldn’t breathe well, it really affected me, and you notice that against your rivals who are in perfect condition. I am taking some antibiotics these days, hope I get through it, and I can be at my best for the decisive days. The idea is to still fight for this Giro.”

In other race news, Tobias Ludvigsson suffered a terrible crash during today’s ITT. The Giant-Shimano rider was seen  being taken away in an ambulance, after he crashed during a big descent in the opening half of the course.

Ludvigsson appeared to be trying to slow down as he negotiated a right turn, but clipped a barrier along the side of the road – later landing in a ditch with his bike coming to rest several feet from him.

“Following his #Giro TT crash, Tobias is up and on his way to hospital for further checks. More to follow later. Best wishes from all team,” Giant Tweeted.

The Giro continues tomorrow with a 158 kilometer stage from Fossano to Rivarolo Canavese.