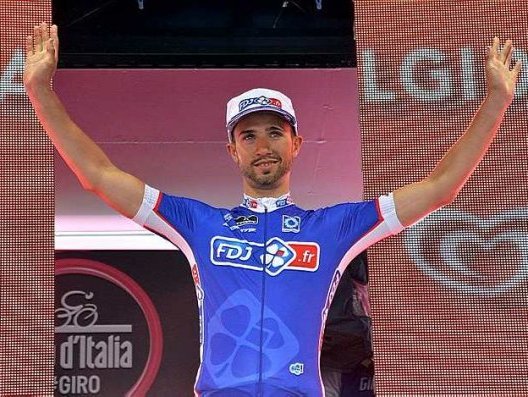 Nacer Bouhanni claimed stage 7 in this year’s Giro d’Italia today, after edging out Giacomo Nizzolo and Luka Mezgec in a bunch sprint, following 214 kilometers of racing from Frosinone to Foligno.

“My team did a great job in the last 50K or so,” said Bouhanni. “Of course, the climbs near the end weren’t easy, but I managed to hang on, and the team did the rest, really.”

A five-man breakaway group containing Winner Anacona (Lampre-Merida), Nicola Boem (Bardiani-CSF), Robinson Chalapud (Colombia), Nathan Haas (Garmin-Sharp), and Björn Thurau (Europcar), got underway early on in today’s stage. And, at one point, the escapee’s advantage grew to more than 8 minutes over the peloton.

However, despite being out in front for most of the day, the breakaway group steadily saw it’s lead over the peloton get  reduced. Indeed, as the race entered into the final 10 kilometers, their advantage had been reduced to just one minute.

From there, Haas attempted to ride clear of his breakaway companions – quickly followed by Thurau. However, within a short period of time, the escapees were all back together. And, a further few kilometers later, they were all caught by the ensuing peloton.

At that point, Orica GreenEdge took up the pace setting at the front of the peloton, with Cadel Evans tucked in right behind them.

“It was a little bit more technical than we originally thought, so we tried to be in the front of the bunch from 5K to go,” said Matthews. “I just didn’t quite have the legs after yesterday to get over the line, but another very good day for the team.”

In turn, both Giant-Shimano and FDJ.fr came to the fore as well – with both teams riding side-by-side during the final 2 kilometers.

As the race entered into the final 800 meters, Tom Veelers took the front – pulling his teammate Mezgec along with him. And, with 150 meters left, Mezgec began to open up his sprint.

However, Bouhanni being the shrewd tactician, edged his way down a narrow gap alongside the barriers to nix his rivals in the closing meters to seize the victory.

“I was close into the corner, but again, with 30 meters to go, I managed to just get in front and just take the win,” said Bouhanni.

The Giro d’Italia continues tomorrow with the 174 kilometer stage  from Foligno to the summit finish of the Montecopiolo.