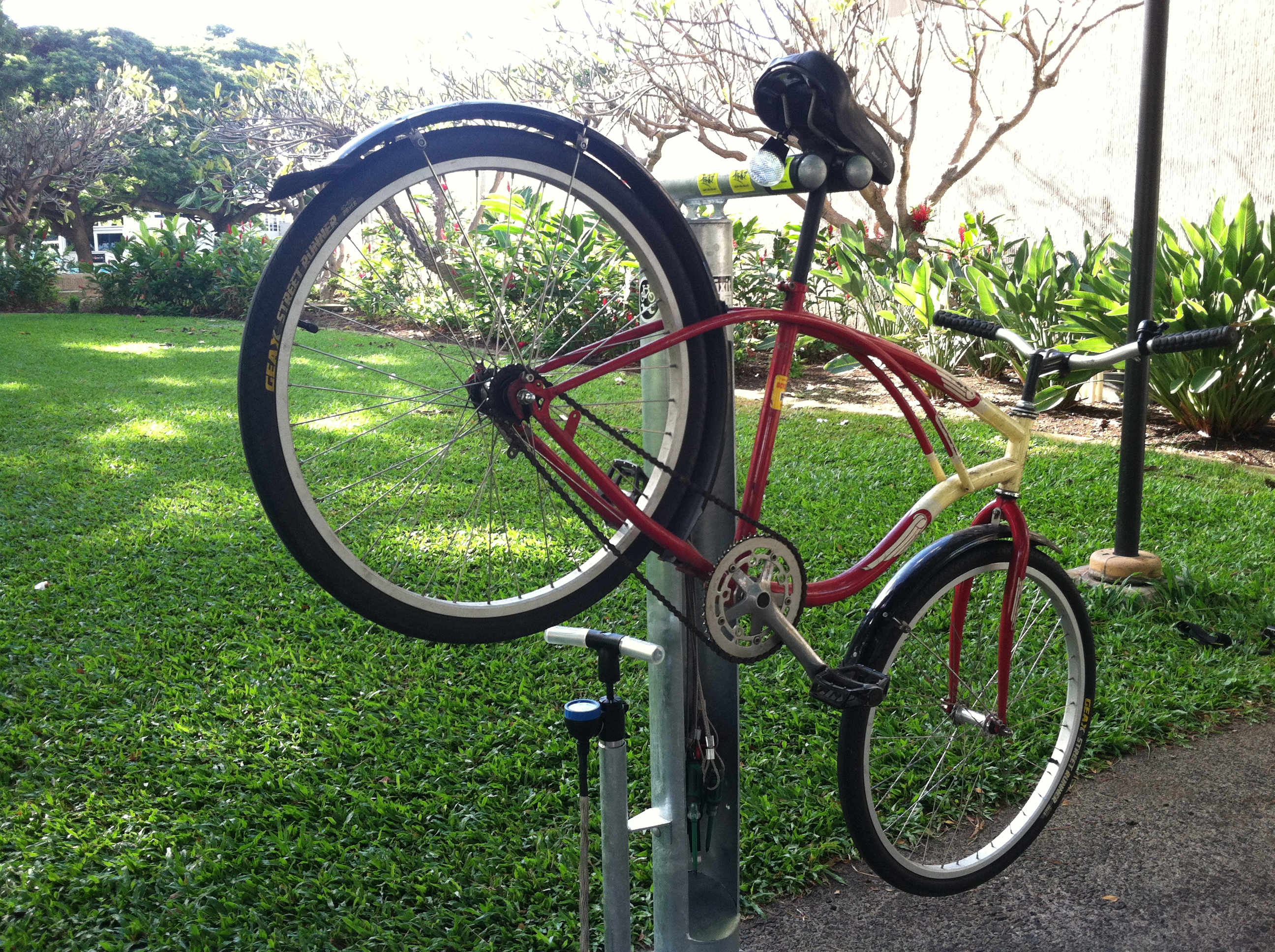 Honolulu’s bicyclists might have noticed a new feature accompanying a bicycle rack along the route through the Frank Fasi Civic Grounds. The city’s first bike repair station was installed last month in an effort to encourage bike commuting and safety. The tune-up stand comes complete with a rack, a gauged-tire pump and flat bar tools, all of which are securely attached to the station to prevent theft.

From an air pump, tire iron, to an allen wrench, you can call it a one-stop garage for bicyclists.

"People don’t always want to run around with a tool kit, so it’s nice to have this safety net here," said Honolulu Bicycle Coordinator Chris Sayers.

Honolulu city engineers just installed a "fix-it" repair station in front of the Fasi Municipal Building.  The $1,000 contraption makes it easy to put air in your tires, tighten any loose pedals or screws.

Sayers says the tools are universal and can fix most bikes.  If you don’t know what’s causing those squeaky brakes or loose chains, you can scan the QR code on the pole to find out how.

"Put your phone on that and it will link you to a website that has common bike repair issues and has videos for all the different kind of repairs for bikes," said Sayers.

City engineers say this repair station is just one of several projects in the works to make Honolulu more bike-friendly.

The city is considering putting a protected bike lane along King Street starting at Alapai Street and ending on University Avenue.  Protected bike lanes means that there’ll be a barrier between the bicyclist, but it also means one less lane on King Street.

The city is also adding a storage site at the Fasi building soon to protect bikes from the elements and vandals.

"That plan is to start simple, so if we could put up some type of fencing around an area with a gated lock and give keys out to bikers so they can use it and know they are locking their bike up during the day and get it at the end of the day," said Department of Transportation Services Director Michael Formby.

Formby says a steering committee will meet next year to figure out how to implement a bike share program in Honolulu and have it up and running in 2015.  These are all projects city leaders hope will make Honolulu more healthy and mobile.

Studies are underway for the bike share program and protected lane on King Street, so the price tag and plans are not concrete yet.

As for the repair station, if the Fasi site is successful, the city hopes to install more sites around town at parks and at the Hawaii Convention Center.