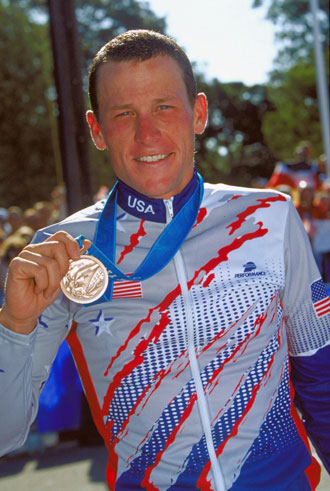 Lance Armstrong’s Olympic medal is back in the hands of the International Olympic Committee.

The International Olympic Committee stripped the American rider of the bronze medal from the 2000 Sydney Games in January after he admitted to doping.

After months of delays, Armstrong handed back the medal two weeks ago to the U.S. Olympic Committee.

The IOC said Wednesday it has received the medal from the USOC and placed it in storage at its headquarters in Lausanne, Switzerland.

"Yes, we have it," IOC spokesman Mark Adams told The Associated Press. "It is in the vaults."

The return of the medal marks "the end of a sad chapter for the sport," Adams said.

The IOC will not reallocate Armstrong’s bronze medal, just as cycling’s ruling body decided not to declare any winners for the seven Tour de France titles once held by the American.

Armstrong finished third in the road time trial in Sydney behind winner and U.S. Postal Service teammate Vyacheslav Ekimov of Russia and Jan Ullrich of Germany. Spanish rider Abraham Olano Manzano, who finished fourth in Sydney, will not be upgraded and the bronze medal will be left vacant in Olympic records.

Last year, the IOC stripped Tyler Hamilton, a former Armstrong teammate, of his time-trial gold medal from the 2004 Athens Olympics after he acknowledged doping. In that case, Ekimov was upgraded to gold.

Armstrong denied doping for years until his confession in January in an interview with Oprah Winfrey. The confession came after a U.S. Anti-Doping Agency report detailed widespread use of performance-enhancing drugs by Armstrong and his USPS team.

Armstrong was stripped of the seven Tour de France titles he won from 1999-2005.