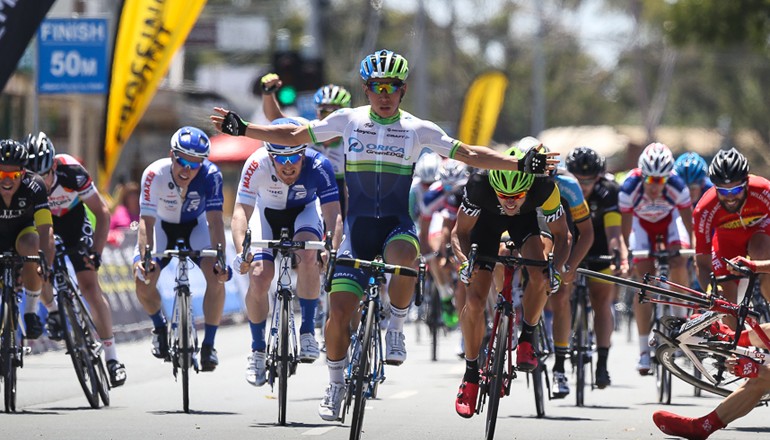 Caleb Ewan has secured his first win as a professional and in doing so has delivered the second win in as many days for ORICA-GreenEDGE, sprinting comfortably to victory in Nagambie after the Jayco Herald Sun Tour’s 117.9km stage 2 on Friday.

Ewan had time to celebrate as he crossed the finish line in the shadows of the statue of Nagambie’s most famous sprinter of the four-legged variety, Black Caviar. Unfortunately, with Ewan’s fists raised to the sky, chaos was unfolding to his left with Drapac’s Brenton Jonestangling with Budget Forklifts’ Sam Witmitz and crashing across the finish line. Steele Von Hoff (KordaMentha Australian National Team) avoided trouble to finish in second place, while Witmitz stayed upright to claim third.

Finishing safely in the bunch was teammate and yellow jersey Cameron Meyer who maintains his four-second advantage over Avanti’s Joe Cooper with two days of racing remaining.

“We were getting challenged coming down the back straight here but our guys were still pretty fresh so we hit out into the last corner and I came around in good position and then won from there,” Ewan explained.

The 20-year-old was relieved to have avoided the crash.

“When I was crossing the line it didn’t sound too good so I was pretty happy to be in front of that one,” he said.

Jones originally placed sixth, but on review of the photo finish it was determined that he was still connected to his bike despite having slid the last 20 meters on his back and was accordingly elevated to fifth.

Jones described the crash as “just a racing incident” but was unsure of being able to play a role in tomorrow’s stage, which is also likely to finish in a sprint.

“The ribcage, and chest and back and neck are quite sore obviously from the hard impact so we’ll see how they pull up tonight and in the morning.

“Now it’s just about recovery and getting back. I know the form’s good,” he said.

“It’s a big season and I want to continue to get results for the guys this season so if it doesn’t mean tomorrow then I’ll be back next race.”

For Witmitz, it was a case of mixed emotions, as a good friend of Jones. The Budget Forklifts rider was hitting top speed in his sprint along the fence, just as Jones started to fade.

“He clipped his handle bars on my knee as it was coming up which flipped him,” Witmitz explained.

“It’s devastating. Me and Brendan are good mates – you don’t want to see anyone crash, let alone your mate. Hopefully there’s a really speedy recovery for him.”

Meyer was happy to let his teammate have the spotlight today.

“Today was favourable for us to have an easier day and let the other teams chase the break and have a go at the sprint with Caleb,” he said.

The race to Nagambie

A parade lap around Bendigo’s iconic Tom Flood Velodrome began today’s stage, but with the top 21 General Classification riders essentially already decided, plenty of teams were keen to test themselves.

Craig Evers (Data #3 Symantec), Joel Strachan (Navitas Satalyst) and Josh Edmondson (Great Britain) were the first riders across the first sprint point after 5.7km. With the prime out of the way, skirmishes began at the head of the peloton.

“It was a little bit stressful actually,” said Meyer. “It took 45km for the break to go. Every single team was attacking us and we just couldn’t get control of the race. There was a bit of nervousness there. There were breaks of 20 to 30 guys going up the road and it was really hard.”

With just one KOM on the menu today, breakaway specialist Will Clarke (Drapac) made his move as the road began to crest taking MTN-Qhubeka’s Tyler Farrar and Mike Cuming (JLT Condor) with him.

Farrar took maximum points on offer, followed by Cuming and Clarke. The Cat.3 climb did not affect the lead of Robert Power(Jayco-AIS Australian U23 National Team) in the Budget Forklifts King of the Mountain Classification.

The effort went some of the way to Farrar earning the day’s Subaru Orange jersey for the most aggressive rider. A sprinter, Farrar decided today might be the day to play the long game in a bid for a stage win.

“After yesterday the race went a little crazy and we thought there was so many riders so far down on GC that there was a good chance that the break would go to the line today.

“I guess I got some good training for the classics today,” he laughed.

“I thought Orica would want to save their legs and fight for GC but apparently enough other teams were interested in the sprint so no luck.”

Will Clarke, who won the prologue earlier in the week, believed that the inclusion of another rider in the breakaway might have made a difference to their outcome.

“I think we would have stayed away if that had been the case,” he said.

The trio could only manage a maximum gap of around 2:45 on the peloton before slowly being reeled in with 10km remaining on the run into Nagambie.

Meyer is expecting his challengers to once again throw down the gauntlet tomorrow.

“I heard the temperature is going up so that’s going to be hard but, the way they attacked today, geez, we could be in for a hard one,” he admitted. “A few more hills, it’s going to be an interesting day but I think we’ve got the team to control it.”