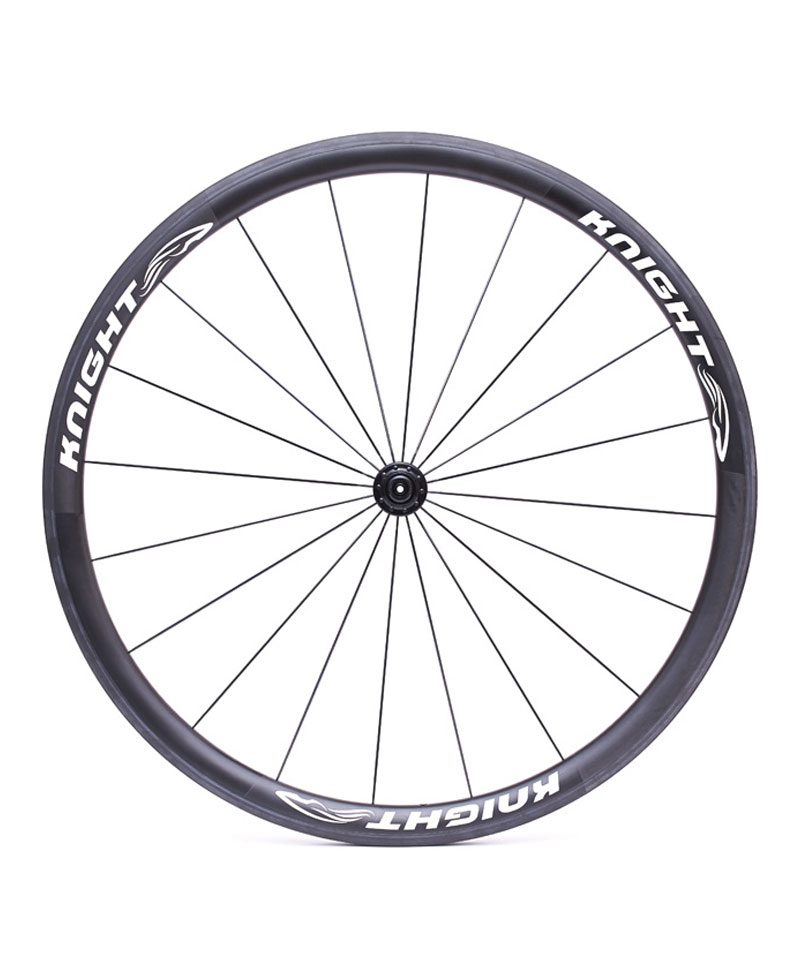 A new brand of carbon fiber wheels is about to roll up to the scene – Knight Composites.

According to Knight, their product is the result of three industry veterans, Jim Pfeil, Beverly Lucas, and Kevin Quan, who’s goal is to produce the fastest, lightest and most reliable, cost effective high performance carbon wheels available.

As many in the industry may know, Pfeil is one of the founders of Reynolds Composites, while Lucas previously held a key roles at Felt and ENVE and Quan is synonymous with the development of the Cervelo P3C time trial bike, and currently has his own design firm – Kevin Quan Studios.

In any case, the trio have some pretty lofty goals for sure – given the fact that there are already a dizzying array of companies claiming to offer wheels that extol the aforementioned virtues.

Knight has plans to offer three clincher models, in sizes of 35mm, 65mm and 95mm. And, each wheelset will feature Sapim spokes, with a choice in hubs from DT Swiss, Chris King and the upper end German brand -Tune.

The 35 represents Knights "do it all" wheelset, with the 65 and 95 targeting greater aerodynamic properties.

Knight is set to unveil its range of wheels during next week’s EuroBike Germany.

Will there ever come a time, when there are enough, or too many wheel brands available ? Never, so long as they continue to be good.  😉

How many of you have allowed your perfectly brewed coffee to get cold because you’re too busy scratching out ideas on the back of a napkin? Or jumped out of a cozy bed at dark-thirty to hastily bang out some notes on the laptop before they disappear and your mind reminds you to buy new slippers instead of trying to make history?

Some of the world’s most respected innovators and their companies started out from some dream or crazy notion along the lines of “we’ve done this before, we can do this again; we can start it from absolutely nothing, and we can try to do it better.” Beethoven, Picasso, Einstein, Ford, Jobs, Branson – the honor roll is practically endless.

Knight’s evolution is not that dissimilar…albeit we wouldn’t be so pompous as to put ourselves up there with such creative geniuses this early in our history. That said, the Knight family and our products were indeed started on the back of a napkin – in a local coffee shop by the Bend/Redmond airport – as two industry mates grabbed a latte before Beverly’s flight back to her ‘work home’ in Melbourne, Australia.

Jim: “How’s your coffee?”
Beverly: “Yeah, good thanks Jim”
Jim: “We’ve been in this industry some years huh?”
Beverly: “Yes Jim, we certainly have.”
Jim: “So…you think we’ve learned a fair amount about composites and carbon wheels over the last few years?”
Beverly: “I reckon we have Jim. What’s on your mind?”
Jim: “I think we can make a faster wheel, Bev.”
Beverly: “I’m all in. What’s on your schedule tomorrow?”

You see, Beverly – a British woman living, working and racking up too many air miles between Bend, Oregon and Melbourne, Australia – and Jim – a die-hard, hates-to-travel Bend-ite hailing from California – have been in the bicycle and composites industry for a combined 30+ years. They have seen and made some really great things happen, often under the radar, working independently and together; and equally witnessed a couple of real learning opportunities along the way.

Jim started his composites career with Cobra Golf and later moved into the sport he loved to become the original founder and owner of Reynolds Composites in southern California. Despite being told by industry leaders that the carbon fork market was crowded and questioned the viability of carbon steerer, he and his partner, Mike Lopez, begged to differ and this resulted in the Reynolds Ouzo Pro and Ouzo Comp forks being spec’d on OEM bicycle brands worldwide. Following the sale of Reynolds, Jim later held composites operations management roles in the US bicycle industry, where he shared a friendship with Lucas for over 15 years.

Beverly enjoyed a career with Felt Bicycles in southern California during its formative years and was instrumental in putting the brand on the map not least by taking them to their first Tour de France with Jonathan Vaughters’ then TIAA Cref – Slipstream team. Working later with ENVE Composites, she identified a need for an expert aerodynamicist to enhance ENVE’s talented composites engineering team, and so brought British Formula One motorsports R and D to the wheel industry by conceiving and managing the Smart ENVE Series partnership.

Take three industry risk-takers and put them together in a small, padded room; and you can be pretty certain you’ll have an end product that is 99.9% guaranteed to check every single box required by you, the consumer of high quality, fast bicycle products. So with this combined knowledge and experience, some truly great relationships with the global industry at large and its invaluable technical press and race journalists; Beverly, Jim and Kevin embraced each other’s respective capabilities, harnessed their best connections and decided to set a yardstick of “Better than the Best.” With financial backing from equally passionate partners – a competitive age-group triathlete and successful businessman and a military aircraft engineer with a love for steel bikes and biathlon – the Knight family was officially born.

And so, with all the pieces in place; what could possibly add to the virtue of mind-blowing Research and Design headed up by three fanatical industry old-timers?

A good manufacturing partner – which is not such an easy process. This partner had to check all of the boxes too in providing a surgical environment for state of the art, next generation manufacturing; the ability to pass every international safety standards test known to man, pass all of the race-safety testing governed by the UCI and – perhaps just as important – share the same goals, have the same worldview, and be on exactly the same page as Knight’s founders, all of the time, and in every single application. We were asking for this partner to walk, talk, think, sleep, eat and drink Knight and be an extension of the company in every way.

The team knew the way our wheels were designed required a manufacturing partner who could deliver a process better than those currently used in wheel manufacturing today. They also knew that many of the well-known performance brands’ carbon bicycle frame manufacturing was a significant step-up from currently adopted composite wheel and parts manufacturing. So why couldn’t that technology be used to make a better wheel? Why couldn’t Knight make a wheel that not only took on the aerodynamic performance attributes of a military jet fighter airplane, but could also be built like one?

Beverly turned to her old boss and long-time mentor in Bill Duehring, President and CEO of Felt Bicycles and, understanding Knight’s lofty goals to set a new global standard and make the fastest, safest wheels on the planet; Bill introduced the team to one of the best carbon manufacturing facilities in the world – a factory already highly skilled in making some of the world’s fastest, safest bicycle frames…and who probably had a hand in making the very bicycle

frame sitting in your garage today.

Our values may offend some people in that we don’t identify ourselves as being ‘home-grown’ or place such importance in our geographical roots. With collective partners hailing from five continents, Knight was fundamentally established with a global identity, plus we all agreed that working in one place on one time zone gets pretty mundane after a while.

On the contrary, Knight places our core values and upholds our credibility and integrity in our people, our products and our community – kind of the same values we instill in our kids. To that end, we like to think we’ve created the F35 Lightning II* of bicycle wheels…a new generation of super-fast, stealth wheel designs that take construction and safety standards to a whole new level, underwritten by a truly global team effort, enlisting brains, engineering, technology, and personality from all over the world.

So we welcome you to the big wide world of Knight Composites. We’re happy to have you ride with us.

*The F35 Lightning II is a carbon composite military jet fighter designed and produced as a global collaboration between some of the world’s greatest Air Forces and their manufacturing partners. Whilst we don’t travel at over 1,000mph and we rarely need to carry a parachute, we’re honored to share our global vision, passion for speed and dedication to superior engineering with them.