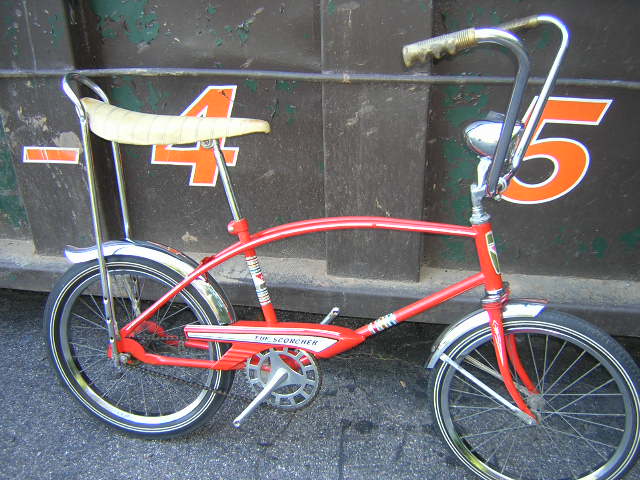 Matt Fuks of Brookings, South Dakota said it was like "seeing an old friend", when he was reunited with his childhood bicycle that had been missing for nigh on to 35 years.

Sergeant Joel Perry, a detective with the Brookings Police Department, accidentally came across his old high school friend’s bike, while inventorying bikes the police department had collected over the year’s, as part of their annual bike auction.

"I was looking through our bicycles one day and I saw that particular bicycle," he explained. "It’s kind of an older bike, so it caught my eye.

"When I looked at it, I saw a sticker on the back end that said ‘Matt Fuks.’ I went to high school with Matt; so I took a picture of it and sent (an email and text) to his wife. I said, ‘Hey , look what we have in the bike rack.’ Kari Fuks, Matt’s wife, responded, noting that Matt had not seen his bike since about 1979.

Perry added, "It was basically an abandoned bicycle that was turned in to us this fall, so we released it to them. It hadn’t been there very long."

Matt Fuks’ father was a career Army officer. Matt was born in Brookings, where his parents had ties to South Dakota State University. Military service took the family away from Brookings, but they later returned.

In 1974, Matt got the bike for his eighth birthday while they were stationed at Stewart Army Subpost, New York, a part of the West Point Military Academy command.

The bike is an Iverson "Road Runner," purple in color and sporting a "banana seat," which was in vogue back in the 1970s.

Matt almost guarantees that the bike was purchased at the Post Exchange at West Point. The bike has stickers from Stewart, West Point and Fort Hamilton, Brooklyn, New York, where the family was later stationed.

Then they returned to Brookings, where Matt attended fifth grade through high school and college. For about five years, the bike got plenty of use.

Fuks said, "I do remember just using the heck out of it, going up to the swimming pool and over to the Dairy Queen when it used to be over by Pioneer Park, and all over town. Rode it to baseball practices.

"The last I remember it is 1979. I was probably a little too tall for it anyway; and I was just about ready to turn 14, so I was way more interested in cars than my trusty bicycle.

"So I really don’t know what happened to it. I don’t know if it got stolen or if we sold it or any of that stuff. It just kind of fades out of my life."

Matt said his returned bike surprisingly looks good for as old as it is.

"It’s missing a couple reflectors. It was a three-speed, which was quite exciting as an 8-year-old," he said. "The shifter knob is missing and it’s a little bit rusty, but the banana seat is still there."

Matt’s job as an area sales manager for Benjamin Moore & Company, the paint maker, demands that he travel a lot; so his wife Kari picked up the bike while he was gone.

He admitted he had "no clue at all" as to where it’s been. He and Perry have both surmised that the bike may have been obtained (in any number of ways), ridden and abandoned and then found by somebody and left in a garage for many years; had it been out in the elements, it would have been in much worse shape than it is. A ride for nostalgia.

As to the future of the bike, Matt said his 10-year-old daughter, Madi (short for Madison) "is really getting excited about it a bit, so she can ride it. Probably when the weather turns a little bit warmer, we’re going to put some air in the tires and make sure the brakes still work and all that kind of fun stuff and let her ride it around the neighborhood. I haven’t made any plans beyond that.

"She’s got her own bike already, but she definitely wants to ride that one around at least for the nostalgia factor."