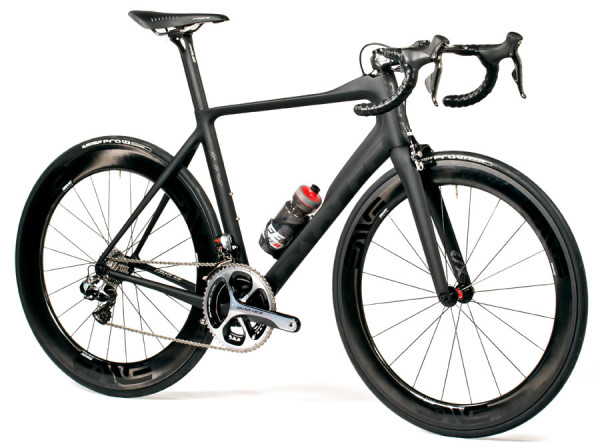 Rumored to be under development for some time, the ESX is a completely new model for 2014. And, it purports to extol all of the virtues consist with the current trend of "aero" bikes.

“We’re certainly not claiming to invent the category, but aero road bikes are certainly growing as a segment,” said operations manager Tom Rodi. “Aero and weight are always a priority. We knew we could make a fast bike because of our triathlon bike, but we wanted to see if we can make something for the road and in the weight class we’re known for.”

According to Parlee, they first put the prototype up against their Z5 model to see if the results obtained during wind tunnel testing – justified their efforts in bringing the concept to life.

Having some friends at the prestigious MIT didn’t hurt either, as they were able to help interpret some of the test results. Indeed, both drag and watt savings were realized during the testing. For example, at a 10º wind angle at a fast output, they found about a 13 watt savings. The savings were validated across a range of angles and speeds that reflected what normal riders achieved. Thus, the decision to move forward !

Rodi said that there’s always some compromise when developing an aero road bike. The question is, what are you willing to give up?

“The challenge was creating the tube shapes and profiles that delivered both aerodynamics and the ride feel that Parlee’s known for,” he said. “And there’s backlash against the aesthetics of some aero road bikes, so we wanted it to look good, too.”

They also had to think about weight. Some prototypes were actually as low as 800g, but production models ended up a bit heavier because they said “they were just way more fun to ride.”

“We did this with a design we call Recurve, and it’s patent pending,” Rodi said.

“The shape is a modified air foil with a rounded front with a reversed curve on the trailing edge that comes back on itself. What’s striking about the design is that it’s obviously aero, but not so deep.

“It delivers the promise of the Kammtail’s aerodynamics but with the torsional stiffness and ride quality of a traditional round tube. We wanted a bike that just plain worked and wasn’t in any way a nuisance to own.”

The ESX uses a variation of Parlee’s flex fit geometry, wherein there’s a top cap that nestles into the frame, around the steerer tube. This in turn, requires fewer spacers for taller riders, and therefore provides a much more balanced and stable "front end". In addition, their flex fit system allows riders to choose any type of  stem they’d like to use.

Parlee will offer the frame in five different sizes.

The seatpost is Parlee’s proprietary design, that follows the same Recurve aero tube shape all the way up to the top of the post. In addition, the seatpost is  available in 0mm and 25mm offsets, and it features a clamp bolt that’s flush with the top tube.

Above and beyond the ESX’s bold appearance, it’s very light – with a claimed target weight of 925g to 950g for a size M/L. The frame is accompanied by Parlee’s custom 320g fork and 300mm uncut steerer. And, the seatpost is said to weigh in around 185g.

Additional specifications include, full internal cable/wiring with electronic and mechanical groupset compatibility, along with a PFBB30 bottom bracket, and frame clearance to accommodate tires up to 28C.

The frameset will retail for $5,400. And, complete bikes will start at $6,500 with an Ultegra mechanical groupset. The range will top out at $10,200 with a full Dura-Ace Di2 9070 groupset. Enve Composites bars, stems and SES wheelsets are available as upgrades, as well as Mavic’s new CC40′s and the EE Cycleworks Direct Mount brakes.

The entry level US model ESX will include a 3T Team Stealth Bar and Stem, HED Ardennes+ Lt Wheels.

Matte black will be the standard finish, while other options are available through Parlee’s custom paint program.