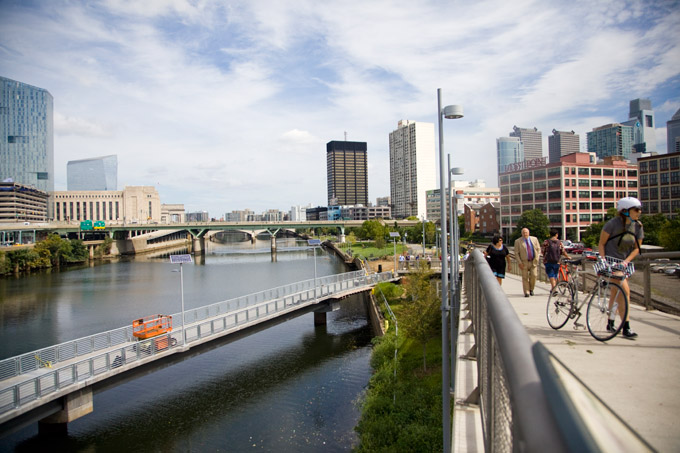 A new extension to the Schuylkill River Trail in Philadelphia opened last week.

After two years of construction, officials last Thursday christened the Schuylkill Banks Boardwalk, a new leg of the popular trail, that now allows cyclists to ride out along the water.

The $18 million structure serves as small but crucial link in what planners hope will be a 130-mile trail from Schuylkill County to Philadelphia. About 60 miles of the trail are finished, according to the Schuylkill River Trail Association.

The segment that winds through Philadelphia has become increasingly popular in recent years – with the addition of bike rentals.  And, within minutes of Thursday’s ribbon cutting ceremony,  hundreds of onlookers and cyclists took advantage of the path’s access to the waterfront.

The riverside path is 15-feet wide and includes four scenic overlooks for those who want to relax and take in spectacular waterfront views of the Philadelphia Skyline.

This is a huge addition to the Schuylkill River Trail, and it’s easily one of the most-used parks in Center City Philadelphia, with more than 19,000 users every week. The trail was already popular with cyclists, and the city hopes the boardwalk is going to be an even greater attraction.