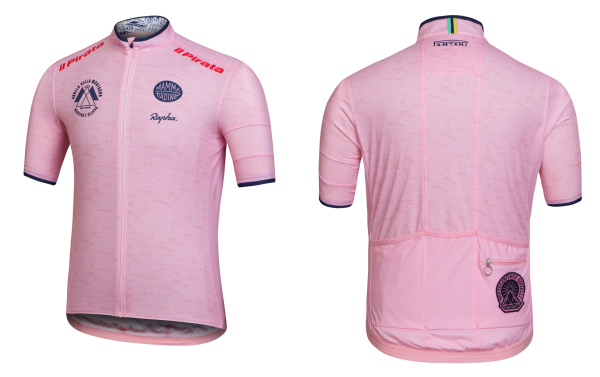 This year is the tenth anniversary of Marco Pantani’s death. A Giro and Tour winner, he raced on a knife-edge, lighting up every race he competed in. But his story ended in tragedy, dying of acute cocaine poisoning after a battle with mental illness and drug addiction. To commemorate one of the most meteoric characters in the history of the sport, Rapha have produced a special edition jersey. Inspired by his career, life and the fervent love that many racing fans still have for him, proceeds from sales of the jersey will go to the Pantani Foundation, which supports youth sports provision and the jersey’s inside story label is written by Tonina Pantani, Marco’s mother. Marco Pantani is a controversial figure, disqualified from the 1999 Giro for an excessive haematocrit level and therefore suspected of blood doping.

Today, we are embracing the new era of the sport where doping is being consciously addressed by teams and riders worldwide. So we would like to take this opportunity to try and answer the understandable questions around commemorating Marco Pantani. Below is a short Q&A with Rapha CEO and founder, Simon Mottram.

We like to think that Rapha is a forward thinking company but also one that respects the importance of the past heroics, suffering, exploits and characters of road racing. We’ve always told stories through our products and content, and Pantani’s story is undoubtedly important in the history of the sport.

For me, the appeal of road racing has never been about technology, watts or heart rates. At its core, road racing is an intensely human sport where, perhaps uniquely, the character and spirit of each rider is pitched not just against their rivals but also against brutal terrain and long distances. In that way, racing could be called a metaphor for life.

To me, real life is not about heroes and villains, good or evil, black or white. Real life is a struggle against the challenges that life throws at you. It is about weakness, frailty and suffering as much as glory and winning races. To celebrate winners without also discussing the struggle is simplistic. But equally, there were interesting stories and exploits even in the sport’s darkest days. Pantani wore his heart on his sleeve. He raced and lived in the full glare of publicity, wracked by insecurity but also displaying the courage and determination to climb to victory.

Like many riders of that era Pantani cheated by using PEDs. But millions of fans loved him because he brought this human struggle and athletic verve to our television screens. Unlike other top racers of the time who were also guilty of cheating, Pantani raced with panache and captured the hearts of the fans. His character shone through. Understanding why that was can help us understand the appeal of this amazing sport.

Pantani died in the months before Rapha launched, but my experience of watching him race was one of the main reasons I started the company. He is a tragic hero, but my greatest cycling hero nonetheless.

Why celebrate a supposed cheat?

The system and culture of the sport is now changing. Over the last ten years progress has been made in flushing out the disease of doping making choices for riders more clearly defined. To commemorate any rider from the pre-2004 era (we use this date because it was the year Rapha was founded) who achieved greatness will prompt questions of doping. We’re not ignoring the fact that he doped, but we’re instead heralding the way he animated road racing in the 1990s. The drama and entertainment Pantani provided is what we all watch racing for. This is not a tribute without respect for the tragic nature of Pantani’s story (see Tom Southam’s essay), and I feel it’s important to comprehend how Marco Pantani was an extreme example of the drugs culture corrupting an already fragile personality.

Aren’t you profiteering off a dead rider and tragic story?

A portion of the proceeds from the Pantani Jersey will benefit the work of The Pantani Foundation, run by Tonina Pantani as a way to support Italian youths in sport and respectfully continue Marco’s legacy. Tonina Pantani, Marco’s mother, gracefully contributed to the design of the jersey, penning the inside story herself as a tribute to her son.

How do you square supporting Team Sky with commemorating Pantani?

Rapha is a progressive company, fully supportive of the new era of cycling in general and Team Sky’s strong anti-doping stance in particular. It is only by working with Team Sky and telling stories from the sport’s current generation of riders and organisations that we can help move things forward. But Rapha exists to celebrate and perpetuate road racing, and Pantani’s story is one that I think is worth remembering, discussing and commemorating. The way Pantani expressed himself when racing his bike, with incredible attacks in the mountains, is something every bike racer aspires to and something every fan loves to see, including this one.