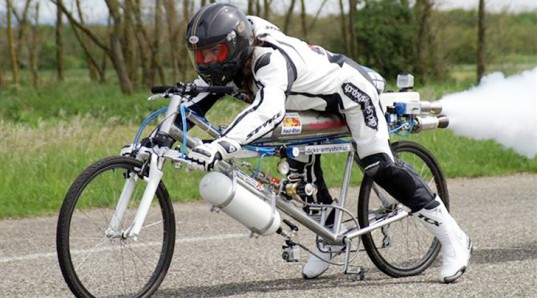 François Gissy set a new world record of 333km/h (207mph) on a a rocket-powered bicycle.

Named Kamikaze V, Gissy surpassed the 200mph mark at the Circuit Paul Ricard at Le Castellet in the south of France last Friday.

Asked how it felt ?, Gissy told the press:

"It’s not fun, your heart pounds really hard." "The fun comes afterwards, when you see the numbers."

The bike was fueled by 90% pure hydrogen peroxide, while the frame is made from an array of  bike parts. And, the tires, were tested by Michelin to safely reach speeds of up to 300km/h for an hour.

Gissy made three runs before his final attempt. During his second run, he was accompanied by a Ferrari, which he left standing in the dust.

Gissy and his Exotic Thermo Engineering team are planning an even faster bike for another record attempt in 2015. The Spine Crusher rocket bike will accelerate at 10g, twice as fast as the quickest rocket-powered motorbike, reach 300km/h in around a second, and top out at over 400km/h.