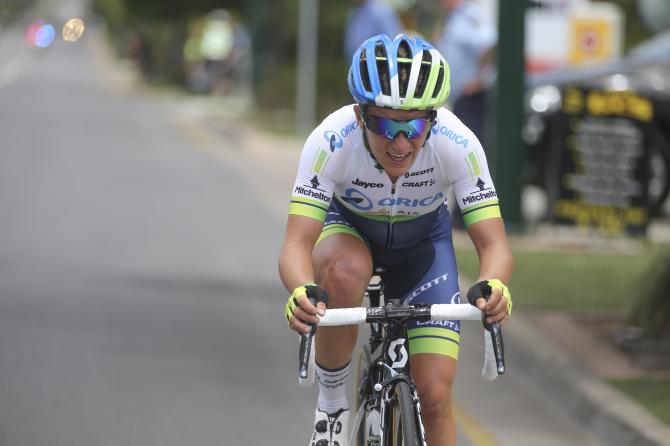 Italy’s Valentina Scandalora (ORICA-AIS) has taken out stage one of the Santos Women’s Tour, the opening event of the Subaru National Road Series in a daring solo breakaway.

The 60km Jayco Road Stage between Woodside and Murray Bridge looked simple on paper, but the rolling hills out of Nairne and windswept roads towards the finish provided plenty of opportunities for ambitious riders to attack.

“It wasn’t planned that we attacked solo but I tried, I saw the occasion and I went,” said an excited Scandalora who broke free from a leading group of 26 riders with 10 kilometres left to race.

“If they were coming back there was no other chance for me, so I gave it all and it was enough. It’s my first race of 2015, in Italy they say ‘who begins well has already done half of the work’ so if you begin well, you’re already on your way.”

Scandalora’s victory was the result of a concerted team effort to break the race apart, with a healthy dose of opportunism.

“We wanted to make the race hard on the first climb and after the Queen of the Mountain but everyone was so fresh we couldn’t do that. We hoped for more wind but there was none, but when there were crosswinds we went as planned, and we broke up the bunch.”

Early in the race, Holden Women’s Cycling Team were the main protagonists, with under 23 road race national champion Shannon Malseed from Victoria leading the charge. Despite their best efforts and regular attacks, nothing stuck before the Queen of the Mountain climb at Nairne, 20 kilometres into the race.

After the climb, it was ORICA-AIS who began to take control, driving up the pace and causing the peloton to break apart. Team Wiggle Down Under was well represented at the front of the group with new recruit Annette Edmonson claiming the intermediate sprint ahead of Lauren Kitchen (Roxsolt) and Elizabeth Doueal (Specialized Securitor).

Soon after, the race split into several groups, with a lead bunch of 26 riders at the head of the race. As Scandalora made her move, she quickly opened up a 25 second gap on the Wiggle Down Under – led bunch.

As the race descended into Murray Bridge, numerous attempts were made to bridge across to Scandalora, not least by Lucy Coldwell (Holden Women’s Cycling Team) who managed to take a big gap on the chase group. However these efforts were unsuccessful and Scandalora crossing the line six seconds ahead of the bunch.

Stage two of the Santos Women’s Tour will be a criterium in East Adelaide on Sunday, January 18.