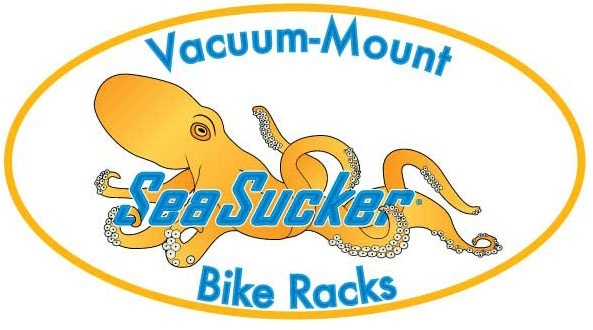 To me, the discussion of bike racks has always been about as exciting as the topic of water bottles. That attitude of course ends, when the time comes to transport my bike in a safe and convenient manner.

Frankly, I’ve always viewed bike rack systems as not only being unsightly contraptions that one has to suffer on his or her vehicle, but cumbersome and potentially damaging as well.

I must say, that I was pleasantly surprised when I came across the SeaSucker vacuum mount system. Immediately I thought to myself, no more ugly hardware bolted to my jitney, to include all of the nicks, scratches and marks that typically go along with traditional racks. However, I was a bit skeptical as to the effectiveness and stability of the SeaSucker system. Until I saw their product video. Holy geepers, this system is "Smokey and the Bandit" proof ! Check it out. (By the way, it’s a little known fact that both Burt Reynolds and Jerry Reed rode in the 1967 Paris – Roubaix classic 😉 )

We are a Florida-based designer, manufacturer, wholesaler and retailer of kick-ass marine accessories, bike racks and board racks for cars, and small electronics mounts for holding iPads, iPhones and similar gadgets.

We got our start in 2005 after putting together a vacuum-mounted chair for use on the deck of a boat. Even though we never actually sold the chair as one of our products, the idea to mount accessories to a boat with vacuum technology turned out to be a winner, and we started making rod holders, dive racks, cup holders and other aftermarket marine accessories.

In 2009, it occurred to us that our vacuum cups could be the basis for an awesome bike rack, so we began designing the racks that we sell today all over the world. Once we were attaching bike racks to cars (and racing them around the track at 140 m.p.h.), it wasnʼt too much of a stretch to start making surfboard, paddle board and kayak racks too.

We jumped on the iPad bandwagon in 2011 when we released our Naked Flex Mount. After a couple of months on our website, it became our number one selling product of all time. We followed that up with the release of our Mini Naked Flex Mount, sized for iPhones and smaller devices, and we havenʼt looked back since.

Our products have been featured in numerous magazines and television shows, and we expect to keep coming up with new ideas that make people say “Wow – I wish Iʼd thought of that!”