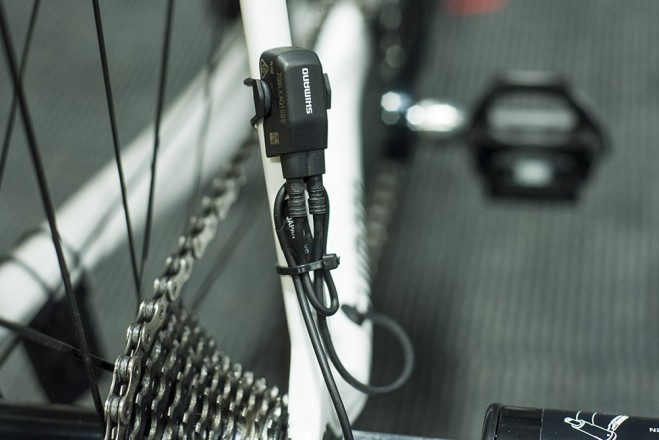 According to the Japanese component giant, it’s Di2 drivetrains will soon be available in a wireless format via a small externally mounted ANT-protocol transmitter – that can be tied in  with the current e-tube wiring system.

Shimano unofficially unveiled the new device at it’s European headquarters yesterday. Therefore, while the new device is still pending an official launch, details are still scarce. However, unlike the set-up seen at this year’s InterBike, wherein the transmitter was housed inside the shifter, the new device features a small black box that can be connected in-line anywhere with the e-tube wiring system.

In the case of the photos, the device is plugged in between the rear derailleur and the battery – on the seat stay. Therefore, it could easily be mounted near the junction box or battery, and hidden inside the frame. However, Shimano warns that hiding the box inside the frame could potentially weaken the signal – thus effecting usability.

According to Shimano, initially the device will only be able to communicate information with it’s Pro SCIO head unit. The company would not confirm as to whether the device will use the open ANT+ protocol – which in turn would allow data to be sent to any ANT+ head unit, such as a Garmin.

For now, Shimano says the device is not capable of controlling shifting.