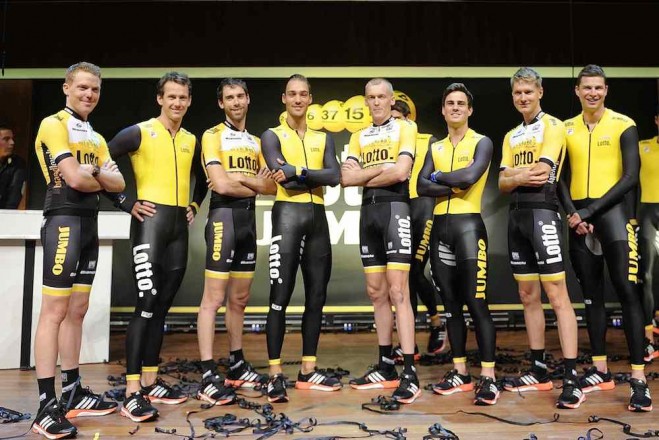 As of today, Team Belkin team has officially morphed into Team LottoNL-Jumbo for 2015. The announcement was made today during a presentation in Utrecht.

The Dutch chain of supermarkets, decided to step in after Belkin announced that they would be withdrawing its sponsorship at the end of the 2014 season.

“It is fantastic news that we have completed the team with Jumbo,"  said LottoNL-Jumbo’s Jac Orie. .

"I am also pleased that our ladies have received a spot in Team LottoNL-Jumbo. We can continue with building a successful team the following years. I look forward to working with the cycling section on a great team, that will hopefully entertain the Dutch sports fans for 12 months a year.”

“Now that the contract with Jumbo Supermarkets is a fact, we can continue with building a future for cycling and speed skating, together with young talents," manager of the cycling team Richard Plugge said.

"Previously, Robert Gesink and Bauke Mollema have transformed themselves into top-level cyclists. Wilco Kelderman and Moreno Hofland are also part of cycling’s top. The team wants to reach the highest level shortly with riders such as Mike Teunissen and Timo Roosen. Kjeld Nuis and Annette Gerritsen are exponents in the development of talents in speed skating. Within a few years after their junior period at the team, they obtained great results at the World Championships and the Olympics. The collaboration with Jac Orie’s speed skaters enables us to work with the best athletes the entire year round, as one team. We are confident that we can excel together and can inspire a new generation of top-level athletes and to reach numerous fans.”

“We are extremely proud that this unique initiative has finally started," Arno de Jong, Marketing Director of De Lotto, said.

"Team LottoNL-Jumbo is a new and unique concept to the Dutch sports world. It brings together two extremely popular sports in the Netherlands, namely: speed skating and cycling. This under the motto: winning together! Together we have grand ambitions and are looking forward to the inspiring collaboration between athletes, coaches and management. The Dutch public and the sports will be the true winners of this alliance. We can’t wait for the National Championships speed skating and for the start of the cycling season as of January 1st.”

“Eating healthy and exercising are extremely important for a healthier lifestyle. We want to inspire our many customers to do so. The collaboration with this unique team provides us with a great opportunity. Together we can transfer our combined knowledge of a healthy lifestyle to the customers, and inspire them to live a more active life,” Colette Cloosterman-van Eerd, Formula and Innovation Director at Jumbo Supermarkets, said.

“Next to this, the team will take on the challenge of combining two teams to become even more successful. This is as recognizable for us as it is inspiring. We have also joined forces, with formulas such as C1000, during the past years. We are stronger together, and together we can win! This is something that appeals to us, and is something that we want to convey to our colleagues, partners and customers.”

“ After having been title sponsor of Team Brandloyalty for two seasons, and having contributed to the successes of the speed skaters at the 2014 Olympics, we hope to guarantee the speed skaters their continuity for the upcoming years," Marco van Bilsen, Marketing Director BrandLoyalty, said.

"We also hope to help obtain new successes for the speed skaters as well as the cyclists of Team LottoNL-Jumbo.”