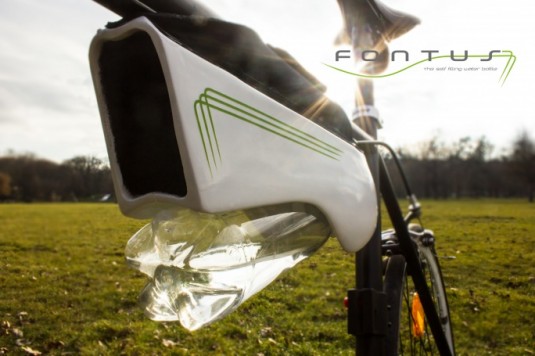 Having an almost "Mad Max", post apocalyptic element to it, check out Kristof Retezar’s self replenishing water bottle – called the Fontus .

Fontus is a self-filling water bottle for your bicycle. This device collects the moisture contained in the air, condenses it and stores it as safe drinking water. Powered by solar cells, it can harvest up to 0,5 l water in an hour´s time under the right climatic conditions.

According to UN statistics, More than 2 billion people in more than 40 countries live in regions with water scarcity. In 2030, 47% of the world´s population will be living in areas of high water stress. Water scarcity may be the most underestimated resource issue facing the world today. Every measure to ease this upcoming crisis is a welcome one.

Harvesting water from the air is a method that has been practised for more than 2000 years in certain cultures mostly in Asia and Central America. The Earth’s atmosphere contains around 13.000 km3 of mostly unexploited freshwater. This project is an attempt to discover these resources.

My goal was to create a small, compact and self-sufficient device able to absorb humid air, separate water molecules from air molecules and store water in liquid form in a bottle.

I conducted a series of experiments trying to identify the ideal conditions, materials and cooling systems. I simulated different climatic conditions in my bathroom, modifying the air temperature and humidity. After more than 30 experiments, I finally achieved a constant drop-flow of one drop of condensed water per minute. After developing a functioning inner system, I designed a compact and practical hull which can be easily attached to a bicycle, integrates the water bottle and can be comfortably handled.

Fontus can be applied in two different areas. Firstly, it may be interpreted as a sporty bicycle accessory. Useful on long bike tours, the constant search for freshwater sources such as rivers and gas stations can cease to be an issue since the bottle automatically fills itself up.

Secondly, it might be a clever way of acquiring freshwater in regions of the world where groundwater is scarce but air humidity is high. Experiments suggest that the bottle could harvest around 0,5l water in one hour’s time in regions with high temperature and humidity values.

How it works:
In order to achieve condensation, one must cool hot, humid air down. The device has a small cooler installed in its centre called Peltier Element. This cooler is divided in two: When powered by electricity, the upper side cools down and the bottom side gets hot. The more you cool the hot side down, the colder the upper side will get. Consequently, these two sides are separated and isolated from each other.

The air enters the bottom chamber at a high speed when moving forward with the bike and cools the hot side down. Moreover, when the air enters the upper chamber it is stopped by little walls perforated non-linearly, reducing its speed in order to give the air the needed time to lose its water molecules.

The condensing structure represents the largest surface in the smallest space possible. This provides a large surface for condensation to happen. Droplets then flow through a pipe into a bottle. The bottle can then be turned to a vertical position and losened. Every kind of PET 0,5l bottle fits.