The History of Cyclocross 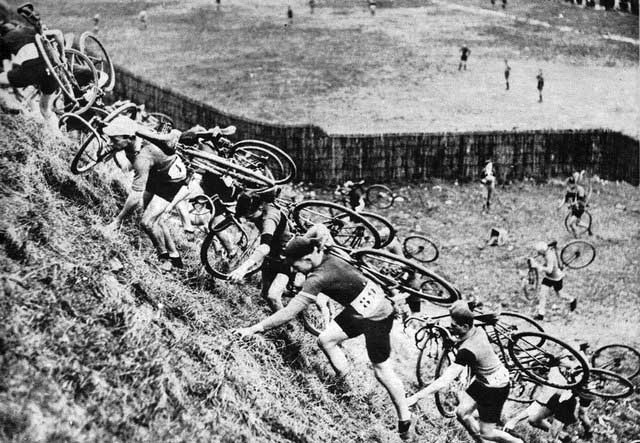 Geoff Proctor, cyclo-cross coach at USA Cycling and World Cycling Center, speaks about the history of the discipline.

There are many stories about the origins of cyclo-cross. One is that European road racers in the early 1900s would race each other to the next town over from them and that they were allowed to cut through farmer’s fields, over fences or take any other shortcuts in order to make it to the next town first. This was sometimes called steeple chase as the only visible landmark in the next town was often the steeple. This was a way for them to stay in shape during the winter months and put a twist on road racing. Forced running sections, or portage, were incorporated to help deliver warm blood to the feet and toes, as well as exercise other groups of muscles. Daniel Gousseau of France is credited as having inspired the first cyclo-cross races and organized the first French National Championship in 1902.

After Octave Lapize attributed his win in the 1910 Tour de France to his off season training in cyclo-cross the sport began to spread to countries bordering France. Belgium organized its first National Championship in 1910, Switzerland did so in 1912, then Luxembourg in 1923, Spain in 1929 and Italy in 1930.

Cyclo-cross proved itself as a sport extending beyond the boundaries of France when in 1924 the first international race, Le Critérium International de Cross-Country Cyclo-Pédestre, was held in Paris.

Like many international cycle sports, cyclo-cross is administered by the Union Cycliste Internationale; although it wasn’t until the 1940s, around 40 years after cyclo-cross’ inception, that the UCI began its regulation and the first world championship was held in Paris in 1950.

Cyclo-cross began to become popular in the US in the 1970s, and in 1975 the first race was held in New England. The first US National Championship was held in Berkeley, CA. The Surf City race series held in Santa Cruz, CA holds a lot of history of cyclo-cross in the US. The sport has experienced a growth in popularity in the US since the mid 90s and now the Pacific Northwest hosts some of the largest events in the country. Cyclo-cross races are now regularly held in the Fall/Winter seasons throughout the USA and continue to grow in popularity.