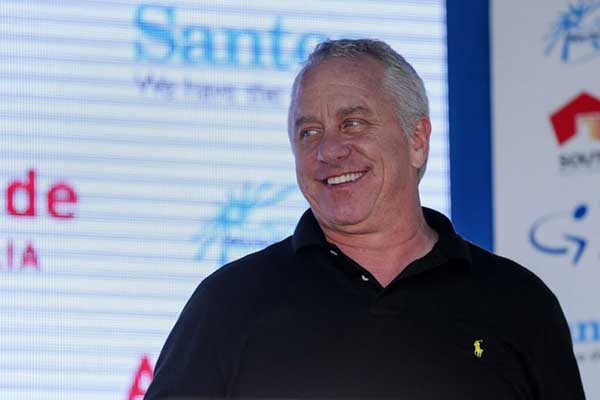 Rohan Dennis has snatched the race lead with a convincing kick on the uphill finish into Paracombe on Thomas Foods Stage 3 of the Santos Tour Down Under.

Close behind the 24 year old was his BMC Racing team mate and compatriot Cadel Evans with Dutchman Tom Dumoulin (Giant-Alpecin) in third place.

“To be honest, I didn’t expect to win,” said Dennis of his stage victory.

“The plan was for me to attack halfway into the climb but I was too far back to follow the plan.

“I have the ochre (leader’s) jersey now but Cadel and I are still both protected,” he explained. “There’s still Willunga (Stage 5) and a lot of racing to come.”

The Santos Tour Down Under will be the final World Tour event for Evans who retires from racing next month. He is now sitting second overall, seven seconds behind Dennis and in prime position to end his 20 year cycling career with a victory.

“We had a plan, covering two bases, but I want to lend a favour to my teammates when I can, so we wanted to give Rohan (Dennis) and Peter (Stetina) the chance to make an attack anywhere they could,” said Evans. “That move really worked for us, and I am sure Rohan is going to be pretty happy.

“We want to stay where we are. It’s not easy, there is a lot of racing still to go,” Evans said. “Today narrows down who we have to watch.”

Today’s racing was expected to shake up the rankings and it did just that with the short, steep Torrens Hill Road ascent giving the climbers a chance to unleash on the final climb at the end of the 143 kilometer stage that began in the inner-city suburb of Norwood and headed out through the Adelaide Hills orchards and vineyards to Paracombe.

The hot, windy conditions didn’t deter the fans with 108 thousand coming out to watch the show.

In similar fashion to the previous two stages a small group rode clear early sparked by an attack from Australian Will Clarke (Drapac).

The quartet stretched their lead to around three minutes and contested the first two of the three iiNet intermediate sprints at Charleston.

Clarke was first at the 67 kilometer sprint ahead of Hansen and Domont and it was the same result 26 kilometers later. But before they reached the third sprint at the 118 kilometer mark Domont found the going in front too hot to handle and dropped back.

The third iiNet Sprint was won by Clarke ahead of Hansen with Watson third.

As the leaders passed by the 20 kilometer to go sign the peloton was fast closing the gap and Hansen soon called quits on the attack. Watson joined him soon after leaving only the instigator of the break, Clarke, alone in front.

But those in the know wanted to be in front when the race turned hard right from Gorge Road onto the climb and Clarke’s efforts to hold his lead were in vain. Just under nine kilometers to go he was swallowed by the bunch but his efforts earned him the daily award of Europcar Most Competitive Rider.

“This morning it was either me or (team mate) Travis Meyer who’d go away,” said Clarke. “He got pulled back after I tried first so it was my turn.

“Being out there I thought I had to go for the sprints,” he said. “The first one wasn’t difficult but the second one was. Lasse Hansen jumped a bit… He’s an Olympic gold medallist for omnium so it was a surprise that I got him in the sprints!

“Towards the end the other guys were a bit tired so I tried to go away again But I had no illusions,” said Clarke.

Once he was captured the jostling for position intensified and not everything went to plan even for the winner.

“I was caught further back but I rode with no stress as Cadel was away with Richie (Porte – Team Sky)…..,” said Dennis. “I stayed behind a Movistar rider hoping that he’d bring me back to the front.

“Thumbs up to Cadel,” said Dennis. “He’s a man of little words but we’ve done well together today.”

Dennis took over the race lead from fellow Olympic track silver medallist and South Australian Jack Bobridge (UniSA-Australia) who was 40 seconds back in 29th place. Behind Dennis and Evans on the overall rankings is Dumoulin at nine seconds with Porte heading six riders who are all sitting at 15 seconds off the lead.

Dennis was also first over the only Subaru King of the Mountain contest today which was 400 meters from the finish line. He went over the summit first picking up the maximum points for the Category 1 climb ahead of Domenico Pozzovivo (AG2R La Mondiale) and Evans.

That moved him to the top of the climber’s contest and he is also the leader in the Cycle Instead Best Young Rider classification.

Evans now leads the iiNet Sprint competition due to his accumulated points for stage finishes over the past three days and BMC is the Virgin Australia leading team.

Tomorrow’s Bupa Stage 4 will see thousands of recreational cyclists in the Bupa Challenge Tour pave the way for the pros who will they race from beachside Glenelg to the city of Mount Barker, a distance of 145 kilometers.