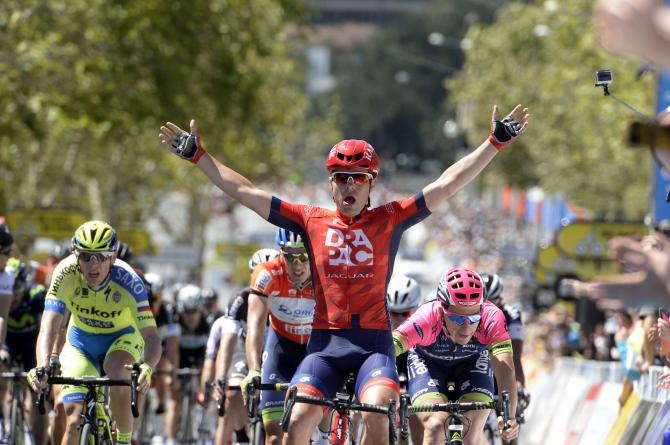 Rohan Dennis (AUS) – BMC is the latest addition to the Santos Tour Down Under Honour Board after safely negotiating a perilous final stage of the 2015 edition. Wouter Wippert (NED) – DPC took line honours in the Be Safe Be Seen MAC Stage 6, but it was a reduced peloton that contested the finale after a crash midway down the bunch held up around 80 riders including today’s race favourite Marcel Kittel (GER) – TGA.

Wippert muscled his way to the front of the race in the final 100metres to convincingly beat Heinrich Haussler (AUS) – IAM and Boris Vallee (BEL) – LTSand win his first World Tour race. He is also the 100th stage winner in Santos Tour Down Under history. Several small crashes caused two riders to abandon the race, Manuele Mori (ITA) – LAM and Hayden Roulston (NZL) – TFR, but most interest was on whether we’d see any real challenges to the jersey wearers in the major classifications.

The answer as is usually the case in the final stage of the Santos Tour Down Under was “no.” Breakaways took care of both Subaru KOM sprints on Laps 10 and 15, leaving Jack Bobridge (AUS) – UNA to claim the classification by two points from Rohan Dennis (AUS) – BMC. Orica GreenEDGE worked to chase down the day’s first break away and set up Daryl Impey (RSA) – OGE so he could win the iiNET sprint at the end of Lap eight. Impey’s lead in that competition still wasn’t secure but there was little chance of Cadel Evans (AUS) – BMC winning the next sprint on Lap 12 and then getting more points on the line.

The Lap 12 sprint was taken out by the day’s second break which formed at the end of Lap 8, and this group of six, Peter Kennaugh (GBR) – SKY, Lars Ytting Bak (DEN) – LTS, Alex Howes (USA) – TCG, Manuele Boaro (ITA) – TCS, Christopher Juul Jensen (DEN) – TCS and Lars Boom (NED) – AST built an advantage of 1:15 by Lap 12. A bunch sprint finale was really never in doubt though and the race was altogether by the final lap.

The crash really threw a scare through the peloton but the main contenders were well clear. IAM came to the front to try and set up Heinrich Haussler (AUS) – IAM for the win he’s been desperate for all week, but Wippert had the better legs on the day, squeezing past Daryl Impey (RSA) – OGE and into a decisive gap. Rohan Dennis (AUS) – BMC came home safely in the main bunch to become the third South Australian to win the Santos Tour Down Under after Stuart O’Grady (1991 & 2001) and Patrick Jonker (2004).

Dennis also becomes the fourth rider to take out both the Overall and the Cycle Instead Young Rider Classification {after Tom Jelte Slagter (2013), Cameron Meyer (2011) and Luis Leon Sanchez (2005)}. Dennis is also the recipient of the Tanya Denver Memorial Award for the highest placed South Australian rider. The 2015 Santos Tour Down Under has produced some of the most remarkable racing in the race’s 17 year history. Make sure you join us again next January, when the Santos Tour Down Under turns 18.