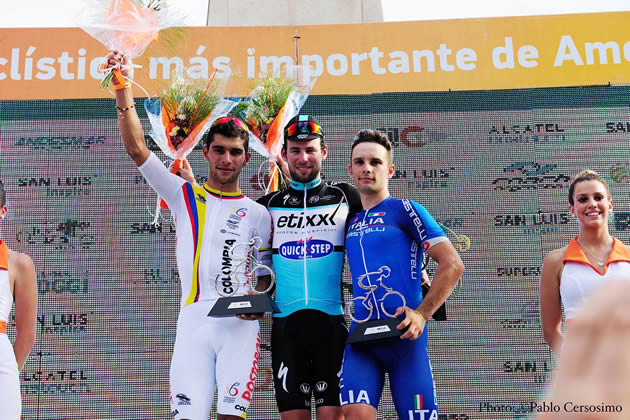 “We rode a tactically smart race,” Cavendish said. “When the break went, Michal Golas went with it. But eventually the teams who didn’t have riders in the break chased it down. We didn’t have to pull earlier because he was in the break, so we were all fresh for the final.

Meanwhile, Daniel Diaz (Funvic), who took hold of the overall lead after stage 2, won the overall title – 1:05 ahead of Rodolfo Torres (Team Colombia) and 1:34 ahead of defending champion Nairo Quintana (Movistar).

Today’s flat 122.4km stage, which started and finished in San Luis, Argentina, had “sprinter” written all over it.

At one point, the breakaway group built up an advantage of three minutes, however, the peloton soon began closing down on the escapees. And, once the race reached the final 25 kilometers, their gap had been reduced to a mere 34 seconds. Shortly thereafter, they were caught during the final approach to San Luis.

From there, Fabio Sabatini delivered Cavendish into position with a perfect lead-out, wherein the Manx Missile was able to executed one of his signature accelerations during the final 300 meters – to seize the victory ahead of Fernando Gaviria.

“It’s important, not just for myself, but for the whole team, to get a good feeling started here,” Cavendish said. “This is important race experience that we will use to build for our season. You can’t replicate this kind of preparation at any kind of a training camp. You need to have other riders around you to really work on your lead-out.”