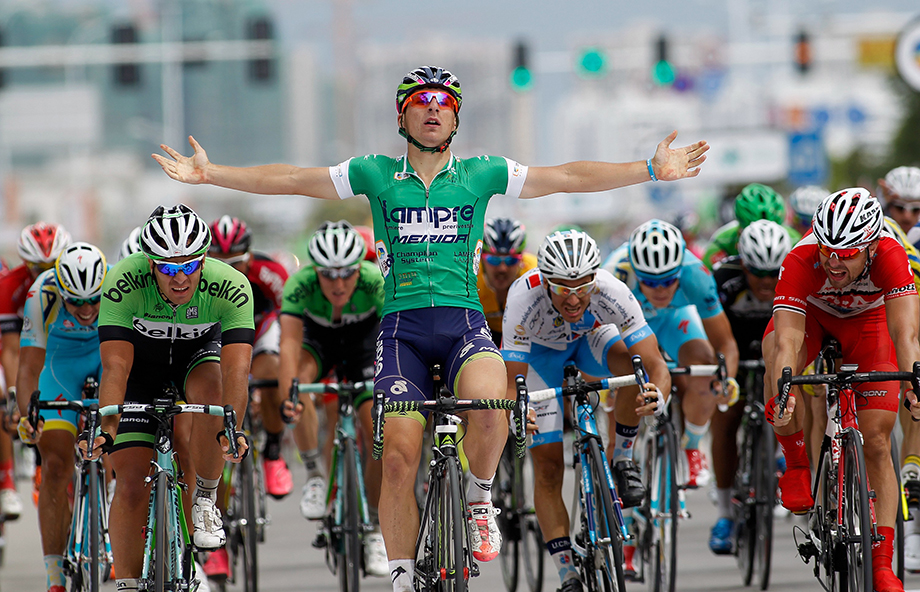 Niccolo Bonifazio scored his second personal stage win and Lampre-Merida’s third one as he claimed stage 6 of this year’s Tour of Hainan at the end of a very fast bunch sprint in Dongfang today.

Two Dutchmen accompanied him on stage for finishing second and third: Belkin’s Barry Markus and Drapac’s Wouter Wippert. With the time bonus, Bonifazio also moved into the lead for the second time after stage 2, on the eve of the queen stage to Wuzhishan.

“My condition is good”, Bonifazio reacted. “I prepared well for this race. I specifically trained for sprinting and I improved a bit, so I’m very happy with the good job done. The team has ridden behind the breakaway until 2km to go, then I followed Palini who had to stay behind me got boxed in. But I’m very happy. The team work has been perfect. We form a nice group here and I hope we’ll be able to reproduce at other races in the future what we are doing here.”
The five breakaway riders of the day were Wang Bo (Hengxiang), Stephen Clancy (Novo Nordisk), Sergey Vlassenko (Vino4ever), Martin Blaha (Dukla Praha) and Adrian Honkisz (CCC Polsat). The latter was the last man caught with 2km to go. They cruised at a very high speed as the race reached Dongfang (literally “direction east” while amazingly this city is in the south west of the island…) fifteen minutes ahead of the fastest schedule. “We rode at up to 80km/h”, recorded best Asian rider Wang Meiyin (Hengxiang). “Three Pro Teams make the race very challenging this year.” It was also a very fast finishing sprint as there was a slight downhill 250 meters before the line.

“I was ahead of Lampre-Merida at that point”, Wippert recalled. “They came off me. They were just faster than me.” Belkin created a bit of a surprise by leading out Barry Markus rather than Tour of Hainan defending champion Moreno Hofland who won stage 1 but nothing since. “It looks like Moreno isn’t as good as last year”, directeur sportif Michiel Elijzen noted. “So we tried with Barry. We didn’t win but his second place is better than what we’ve achieved those past few days.”

Stage 7 will be another story as no bunch sprint is expected in Wuzhishan ten kilometers after the third category 1 climb on the course. “I’m a bit worried about tomorrow’s stage because this isn’t our specialty but we’ll look at defending ourselves”, Bonifazio warned. “The riders from La Pomme Marseille look very strong, especially Julien Antomarchi but three of them are in the top 20 and Astana is the other super team. I don’t know where I’ll end up but I definitely like this race. The roads are very nice. There are some flat stages that almost don’t exist in other Tours anymore. Asia is becoming the new sprinters’ paradise!”

Stage 7 is considered the queen stage with three category 1 climbs located between Dongfang and Wuzhishan on a 199.1km course.