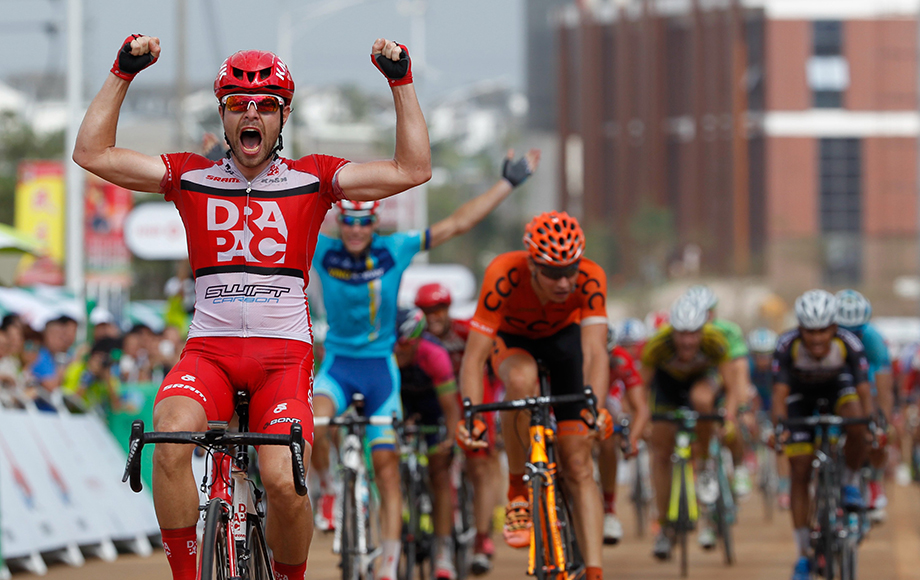 The ninth and last stage of the ninth Tour of Hainan was a spectacular one with a trio resisting in extremis to the return of the peloton. Dutchman Wouter Wippert of Drapac won ahead of Adrian Kurek from CCC Polsat and Taras Voropayev from Vino4ever while Julien Antomarchi became the first Frenchman to claim the Tour of Hainan overall.
“Firstly, I was racing for third place in the points classification”, Wippert explained. “I needed to score more points so instead of waiting for the final sprint, I decided to go away before the first intermediate sprint. We almost got caught after that but someone stopped pulling the bunch and we stayed away. I heard we only had 20 seconds lead with 2km to go but we kept going. The Kazak rider attacked 500 metres from the line. I was the second guy to follow and I sprinted with 250 metres to go.”
“I think we have underestimated the breakaway a little bit”, regretted Lampre-Merida’s Niccolo Bonifazio who will however remain as the big revelation of the Tour of Hainan, having bagged three stage wins and the points classification. “In the last few kilometers, the guys at the front rode really strongly. During the stage, we shared the turns with La Pomme Marseille and we did all the work at the end but it was still not enough.”
Wippert’s was lucky to be away with Kurek, a Polish rouleur who always gives it all in the escapes. “With the head wind in the finale, I didn’t have any possibility to ride away solo”, said the tall rider from CCC Polsat. “It was really not easy to survive and resist to the return of the peloton. I was ahead with 400 metres to go. I took risks but I did all I could for my team. Anyway, there was not much more I could do against a pure sprinter like Wippert.”
This was Wippert’s ninth win of the year, most of them having been claimed in Asia, despite a break of two months in the middle of the season due to sickness. “I came back for the Tour of China and the Tour of Hainan”, the Dutchman said. “It feels so good to win the last race of the season. There’s good racing in Asia. It’s different from Europe but it’s not easy at all to win. I had signed with Drapac for two years and I’m happy to stay with the team next year. Hopefully, we’ll come back to the Tour of Hainan.”

Another rider who’d really like to come back to the Chinese island is Antomarchi but at this stage he’s got no guarantee of having a contract with a professional cycling team in 2015. “This is my first ever victory in a stage race overall”, the Frenchman noted. “It’s a great one, in a very well organized H.C. race. This is a big step in my career and I hope it’s not the end. I wasn’t a favorite before the start because of the three Pro Teams (Astana, Belkin and Lampre-Merida) in contention and I was also not sure of my own shape. I’ve been kind of lucky to win stage 4 as logically the bunch should have caught me but it gave me the time bonus I needed to secure the lead in the queen stage. Tactically, we’ve worked really well as a team. It’s a surprise that I win but it’s a nice surprise.”