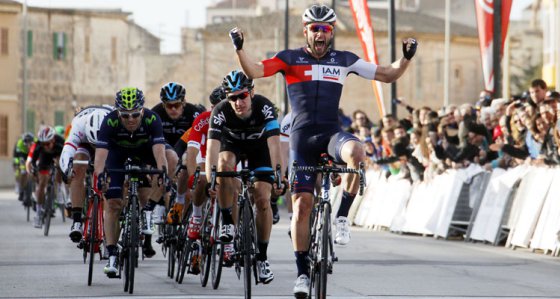 The Italian rider began this year’s Challenge Mallorca series, by winning the opening race, the Trofeo Santanyi, on Thursday.

Today’s race was highlights by an early breakaway group containing Darío Hernández (Burgos BH), Unai Intziarte (Murias Taldea) and Ilart Zuazubiskar (Spain), who succeeded in riding clear during the opening kilometers – to build up a substantial lead of five minutes over the peloton.

However, a determined peloton under the impetus of team Cofidis, continued to reduce their advantage.

Indeed, Zuazubiskar was the last of the escapees to be swept up, in the final hour of racing, while Team Sky took the front in the closing   kilometers, in an attempt to set-up their man – Swift.

However, both Greipel and Pelucchi found themselves in better positions during the finale, as both men swooped in during the waning moments to claim victories ahead of Swift