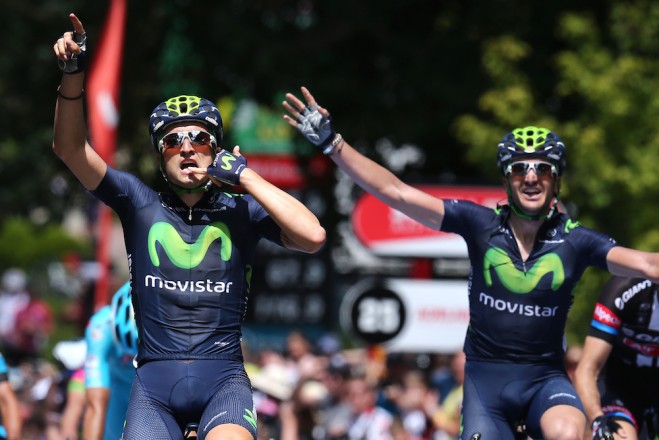 Juanjo Lobato (Movistar) bounced back from yesterday’s crash marred finish, to claim stage 2 of this year’s Vuelta a Andalcuía, with a well-timed long-range sprint, that saw the Spanish rider blow by John Degenkolb (Giant-Alpecin), who at one point looked poised for victory.

Today ‘s 191 kilometer stage from Utrera to Lucena, featured the short category 3 climb of Primera Cruz, which peaked six kilometers from the finish.

Along the climb, the peloton saw a flurry of short-lived attacks. However, on the descent, Alberto Contador (Tinkoff-Saxo) tried his luck – just two  kilometers from the finish. But, Degenkolb capitalized on the Spanish rider’s efforts and emerged from his back wheel, to nestle behind two CCC Sprandi Polkowice riders.

However, the German rider was caught off guard, when Lobato accelerated down the right side of course in the closing 300 meters.

Degenkold gave chase, but he was unable track down the Spanish rider, who went on to seize the win by a few bike lengths.