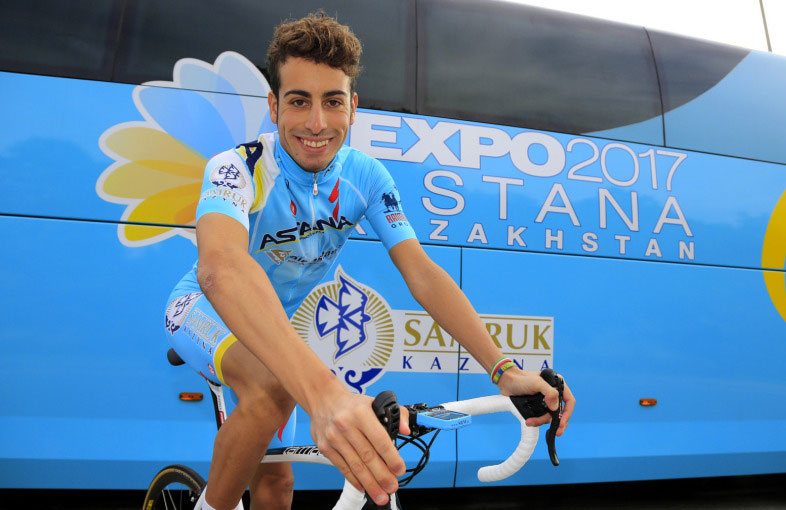 Aru was the first rider to jump clear in the closing moments of today’s stage, followed by  Froome.

Froome did most of the pace setting for the duo in the closing meters of the stage. However, Aru managed to surge past the British rider just shy of the finish line to seize the win.

Contador continues to lead the race, however, Froome is now in second place at 1:19 behind, with Valverde falling to third.

Today’s stage saw numerous attacks and breakaway attempts in the early part of the race. However, it wasn’t until 47 kilometer mark, that the day’s first breakaway group came together – featuring Johan Le Bon (FDJ.fr), Luis Leon Sanchez (Caja Rural) and Hubert Dupont (Ag2r-La Mondiale). And, from there, the trio went on to establish a four minute advantage over the peloton.

Tinkoff-Saxo and Team Sky led the field up the first climb of the day, wherein Le Bon was the first escapee to be caught. Sanchez in turn took the mountain points, but soon after waited to rejoin the field.

Dupont, who had been joined by Alberto Losado (Astana), continued to remain out front.

Back in the peloton, Team Sky continued the pace setting, with Froome attacking at the last intermediate sprint – subsequently picking up two bonus seconds.

With 7.5 kilometers remaining, Christophe Le Mevel (Cofidis) tried his luck, only to be quickly reeled back in. From there, Contador’s group decided to pull away, leaving Valverde and Froome hurrying to catch up. Contador then decided to make a go of it on his own, only to have his top rivals quickly respond with him.

Jerome Coppel (Cofidis) was the next to attack. However, the French rider failed to create anything more than a 10 second gap.

With 3.8 kilometers remaining, Aru succeeded in riding clear. However, he was subsequently  caught and passed by the undeterred Coppel. Daniele Navarro was the next to attack, but his move was brought to a quick end – just as the race entered into the final 3 kilometers.

Rodriguez then attacked, taking Contador, Valverde and Froome with him. And, with just  2.5 kilometers to go, Froome attacked his companions – making his way up to Aru.

Behind, the three Spaniards gave chase, but Froome had already gained 15 seconds, with Aru sitting on his wheel for the duration.

Rodriguez then tried to ride clear of Contador and Valverde, but to no avail.

As the race head into the final kilometer, Aru succeeded in coming around Froome with a final acceleration, that left the British rider out-foxed.