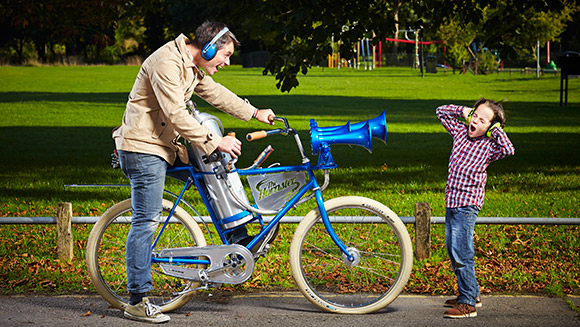 GET BLOWN AWAY BY THE WORLD’S LOUDEST BICYCLE HORN

Here’s one of the new entries in the Guinness World Records 2015 book that’s guaranteed to make a big noise.

Yannick Reed, 43, from London, makes a living as a website writer, but in his spare time he is a part-time inventor.

Among his many creations is ‘The Hornster’ – a super-powered honker capable of producing a sound pressure level of 136.2 db(A) that has set a new world record for loudest bicycle horn.

Yannick,  a keen cyclist who rides around 100 miles a week, noticed that inattentive lorry drivers did not notice his regular horn.

With this in mind he created a horn that’s capable of being louder than any heavy goods vehicle.

He describes his neighbors as ‘long-suffering’ as they have had to put up with the racket made by his invention.

On making it into the Guinness World Records 2015 book for two titles (he also has an entry for smallest caravan – check it out here), Yannick claims to be ‘ridiculously proud’.