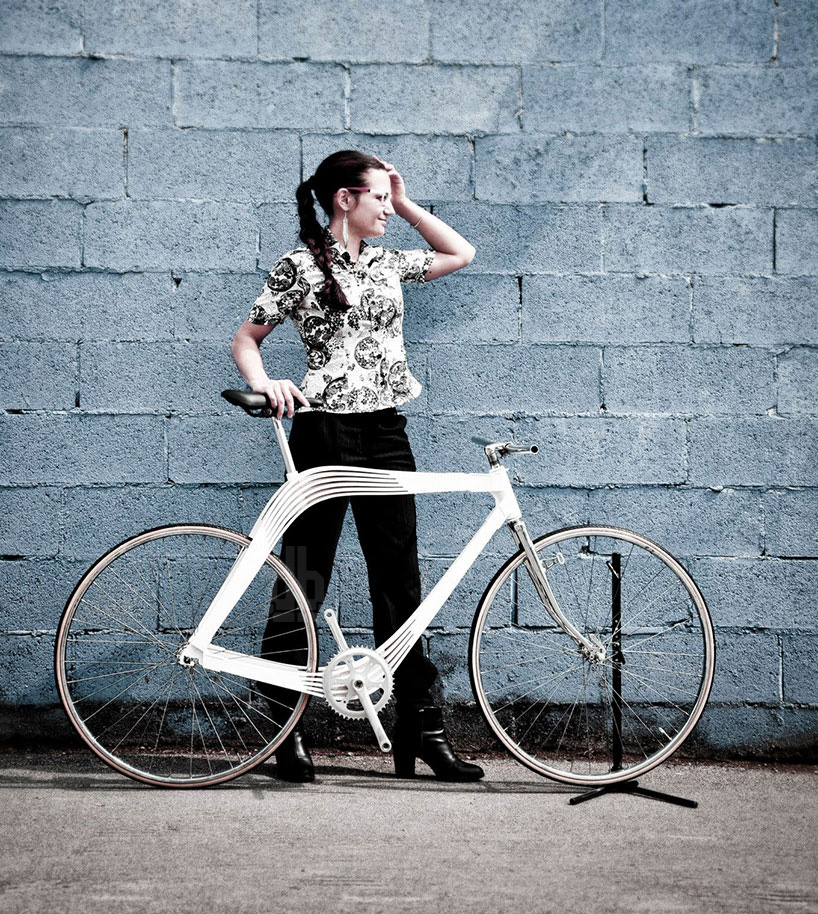 Since June 2014, architects Atanas Zhelev, Mariya Korolova and Martino Hutz have been working on a revolutionary wooden bicycle, which was unveiled at last month’s Milan Design Week show.

The project began while they were working on wooden structural design concepts, as part of their studies at the University of Applied Arts Vienna.

According to the designers, “the skeleton of the bicycle aims to uncover alternative options for wooden structures. where the ‘composite wood technology’ was engineered for the realization of this design. This technique is similar to the way in which carbon fiber is used to manufacture composite structures”.

“We received lots of interest from structural consultants following the design of the house,” explained project manager Atanas Zhelev. “To further develop our ideas and the technology for large-scale buildings, we chose to start at a smaller scale by creating a bicycle.”

“The bicycle is perfect to test how wooden structures work in different scales with different loads.”

According to Hutz, the bicycle combines “structural functionality and aesthetic clarity. He describes it as a hybrid of Le Corbusier’s mantra “form follows function” and “form follows beauty”.

Each length of birch wood was cut into 0.9-millimetre sheets, which were then glued together to form the final shape. The natural fibres of each wooden element were aligned to enhance overall strength as well as increase rigidity.

“The choice of wood as the material for this project is especially significant,” added Zhelev, “as it not only combines natural beauty and resource friendliness, but also offers the elemental properties of being flexible.”

The layering principle was also an important aspect to the wooden prototype, which the team believe is a better way of creating wooden shapes than milling timber blocks.

“This usually wastes a lot of wooden material and destroys the natural structure of the wood,” said Zhelev.

“The project seeks to go beyond the conventional bicycle through the investigation and establishment of new manufacturing methods using wood-based materials for larger constructions,” he concluded.

The designers have since researched the prospects of introducing layers of carbon fibre or aluminium within the wooden structures, which they say will increase overall structural strength with less material.

“The carbon absorbs the sheer force, which is higher on both sides of the wooden block, while the birch offers flexibility,” explained project engineer Mariya Korolova. “The ratio between the carbon and the birch would control the overall flexibility of the wooden lamellas.”

The final prototype is scheduled to be manufactured this year and will be subject to a test for long-term stress build-up to prove its viability and longevity.