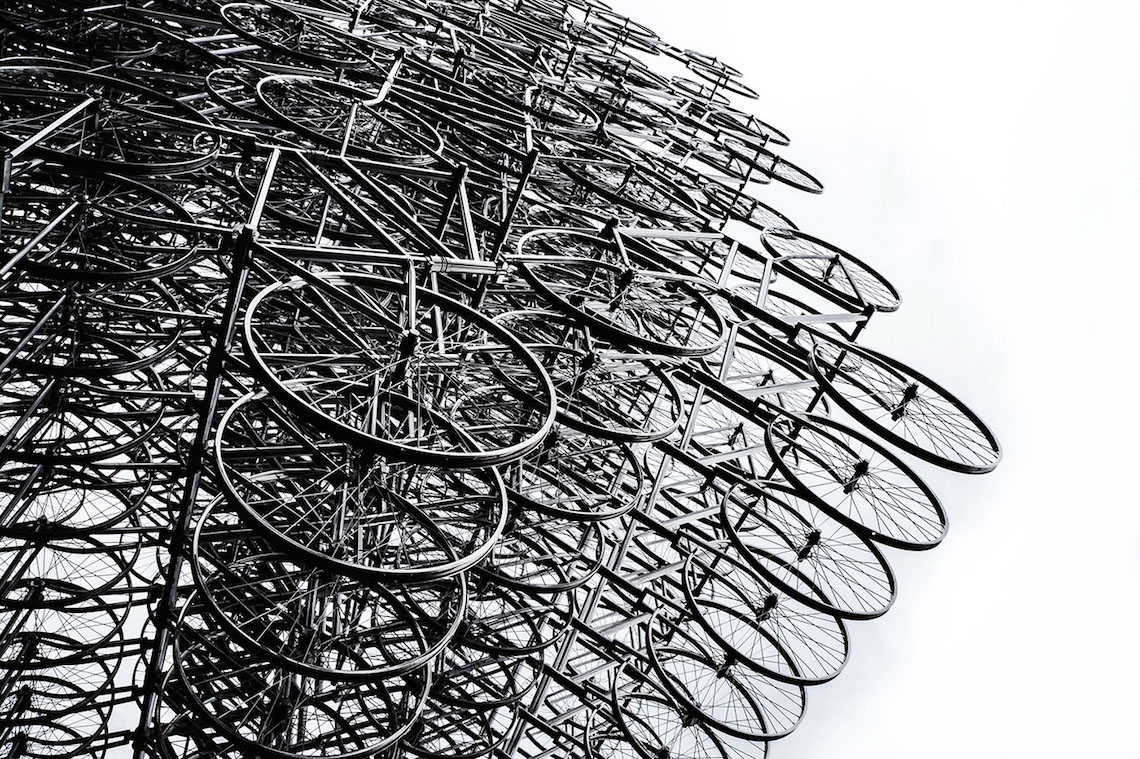 Weiwei’s installation has travelled the world, but the way it was presented at Austin’s Waller Creek Conservancy was unique.

When the installation was finished, it rose 32 feet, and it included nearly 1,300 bikes, forming an archway where viewers could walk under it and look up to what was described as an optical track of the eye.

The Waller Creek Conservancy was thrilled the installation was set right along the creek. “We have it right at the foot of the hike and bike trail and there will be cyclists and pedestrians walking by in droves every day,” says Griffin.

Perhaps no artist has merged art and activism on a global scale more successfully than Ai Weiwei (Chinese, born 1957 in Beijing). What some might refer to as an art-as-life practitioner—his life is his work and vice versa—today Ai Weiwei approaches mythology through a lifetime of political activism and government dissent combined with prolific art making and a mastery of twenty-first-century communication.

The artist’s father, the lauded poet Ai Qing, was the target of widespread government suppression of radical intellectuals leading up to and during the Cultural Revolution (1966–1976). Along with his wife, the poet Gao Ying, and young child, Ai Qing was sent to labor in exile in remote areas of Manchuria, the western region of Xinjiang, and finally to the Gobi Desert in China, where Ai Weiwei spent his childhood.

Today, Ai’s gestures—not only via art objects, but through his actions, performative interventions, collaborations, writings, films, and spoken words—continue this legacy, provoking the oppressive regime in China by uncovering truths about daily life whose existence questions and threatens the stability of government control.

His most prolific work to date, Forever Bicycles (2014), consists of over 1,200 bicycles transformed into a playful, spectacular monolith of a sculpture. In characteristic fashion, the artist decommissions and recontextualizes a functional everyday object: the bicycle. The title, Forever Bicycles, alludes to the Forever brand (Yongjiu)—a company based in Shanghai whose mass-produced bicycles flooded the streets of China during the artist’s childhood yet remained financially out of reach for many—but also suggests a globally utilitarian form of transport now disappearing as car culture becomes predominant.

The conceptual premise of this series consists of several to thousands of bicycles assembled into a composition, typically with an archway underneath for viewers to pass through. The work has existed in many iterations over time, each version site-specific to its location through the number of bicycles, positioning, and formation. While static, the bicycles together become a vertiginous structure of steel, light, and shadow, rendering the “forever” in the title a metaphor for meaning beyond the brand and encapsulating the optical effect when the viewer looks up into a seemingly infinite puzzle of wheels, frames, and spokes with the sky as backdrop.