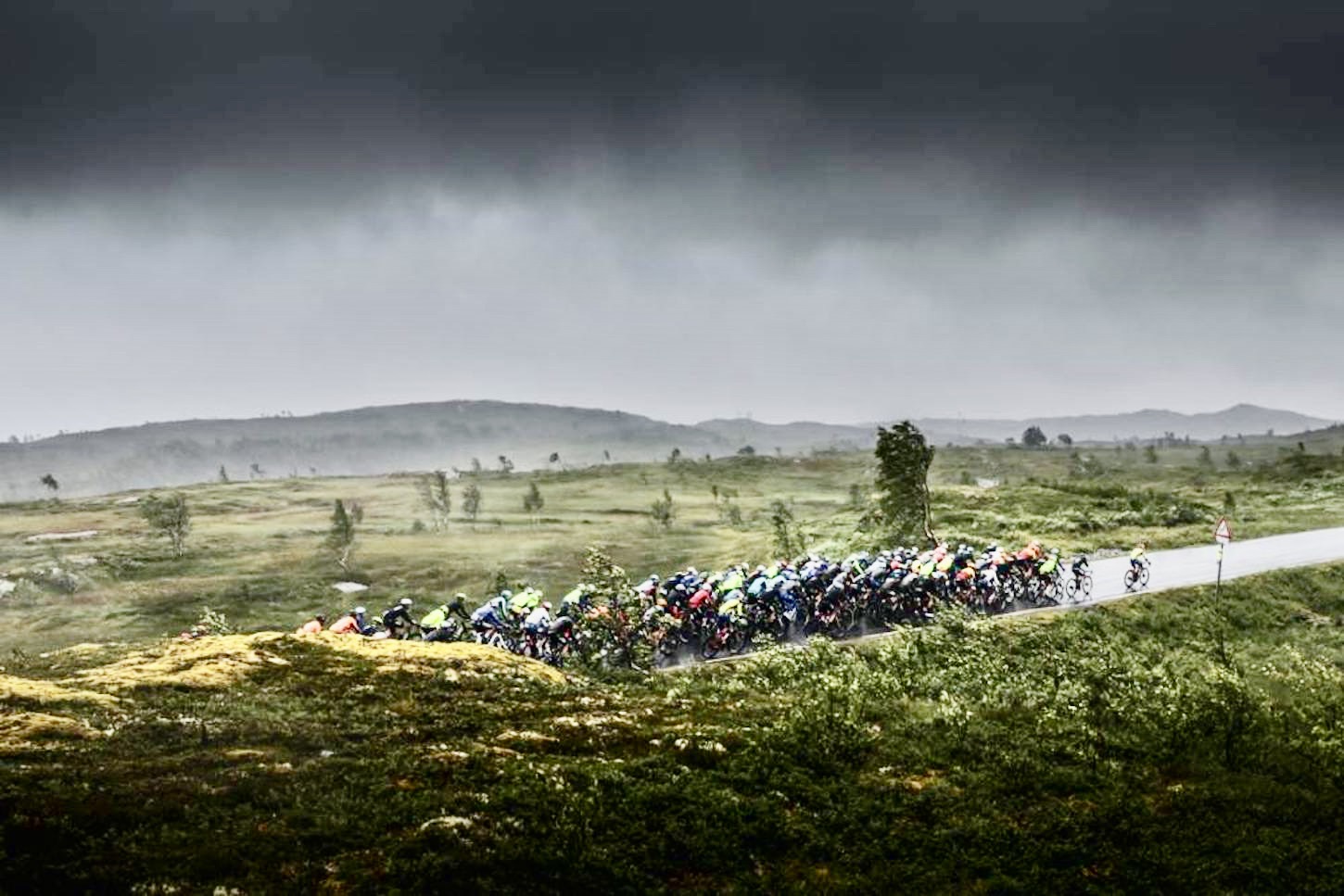 Cofidis’ Axel Zingle won the first stage of the Arctic Race of Norway, a five-hour loop under the rain which started and finished in Mo i Rana. The French rider was the quickest up the definitive hill, putting some bike lengths on Gleb Syritsa (Astana Qazaqstan) and Mathieu Burgaudeau (TotalEnergies), second and third over the line. It’s the second victory as a pro for the talented young Frenchman, who becomes the first wearer of the Midnight Sun jersey as a race leader with an advantage of four seconds over Burgaudeau and five over Syritsa.

114 riders took the start on the 1st stage of the 2022 Arctic Race of Norway, which started and finished in Mo i Rana after covering 186,8 kilometers, at 11:20. Strong winds and mild rain accompanied the cyclists all day long. As soon as the race began, a group of five with Stephen Bassett (Human Powered Health), Luis Ángel Maté (Euskaltel-Euskadi), Aaron Van Poucke (Sport Vlaanderen-Baloise), Eirik Lunder (Team Coop) and Sam Culverwell (Trinity Racing) went clear from the peloton. By kilometer 17, they had built a remarkable gap of 5’20”. Back in the bunch, Intermaché-Wanty Gobert, Uno-X and Israel-Premier Tech joined forces to control the breakaway as the route headed south-west.

Bassett was the first rider atop Korgfjellet (Cat 1, km 46,9), where the front group had an advantage of 3’35” over the peloton. The gap was steady for the following hour of racing, as the American rider reached the summit of Elsfjord (Cat 2, km 95,3) in first position again. The vibe in the main group changed as it approached the second climb to Korgfjellet (Cat 1, km 107,9), with Intermarché’s Taco van der Hoorn and Dries de Potter taking the reins to up the pace and reduce the gap of the breakaway down to 1’30” on its summit. Meanwhile, Bassett secured the lead of the KOM classification and the maiden Peacock jersey by cresting the third and final categorized climb of the day in first position. After the subsequent descent, some attacks took place in the bunch, with Krists Neilands (Israel-Premier Tech) being particularly active at this segment of the race. No one was given leeway, though, and Uno-X and Intermarché-Wanty Gobert regained control of the operations, with BikeExchange-Jayco joining the chase for the benefit of its sprinter Dylan Groenewegen. The advantage of the break had increased to 2’20” as they went through Finneidfjord (IS, km 135) led by Culverwell.

A bunch cut by half

Uno-X sped things up at the cutting edge of the main group, shutting down the break with 24 kilometers to go and trimming the peloton before the first crossing of the finish line (IS, km 165,5), where Mathieu Burgaudeau (TotalEnergies) accelerated to pass first in order to net some bonus seconds for the GC. A reduced bunch of 60 riders was left at the head of the race by the second crossing of the finish line (IS, km 176,2), led by Kristian Aasvold (Human Powered Health). Team DSM took over from Uno-X and managed to keep the front group together through the final lap around Mo i Rana despite several attacks. The final kilometer kicked slightly uphill. Axel Zingle (Cofidis) opened the sprint with 200 meters to go and nobody could match his powerful acceleration as he powered away to victory.