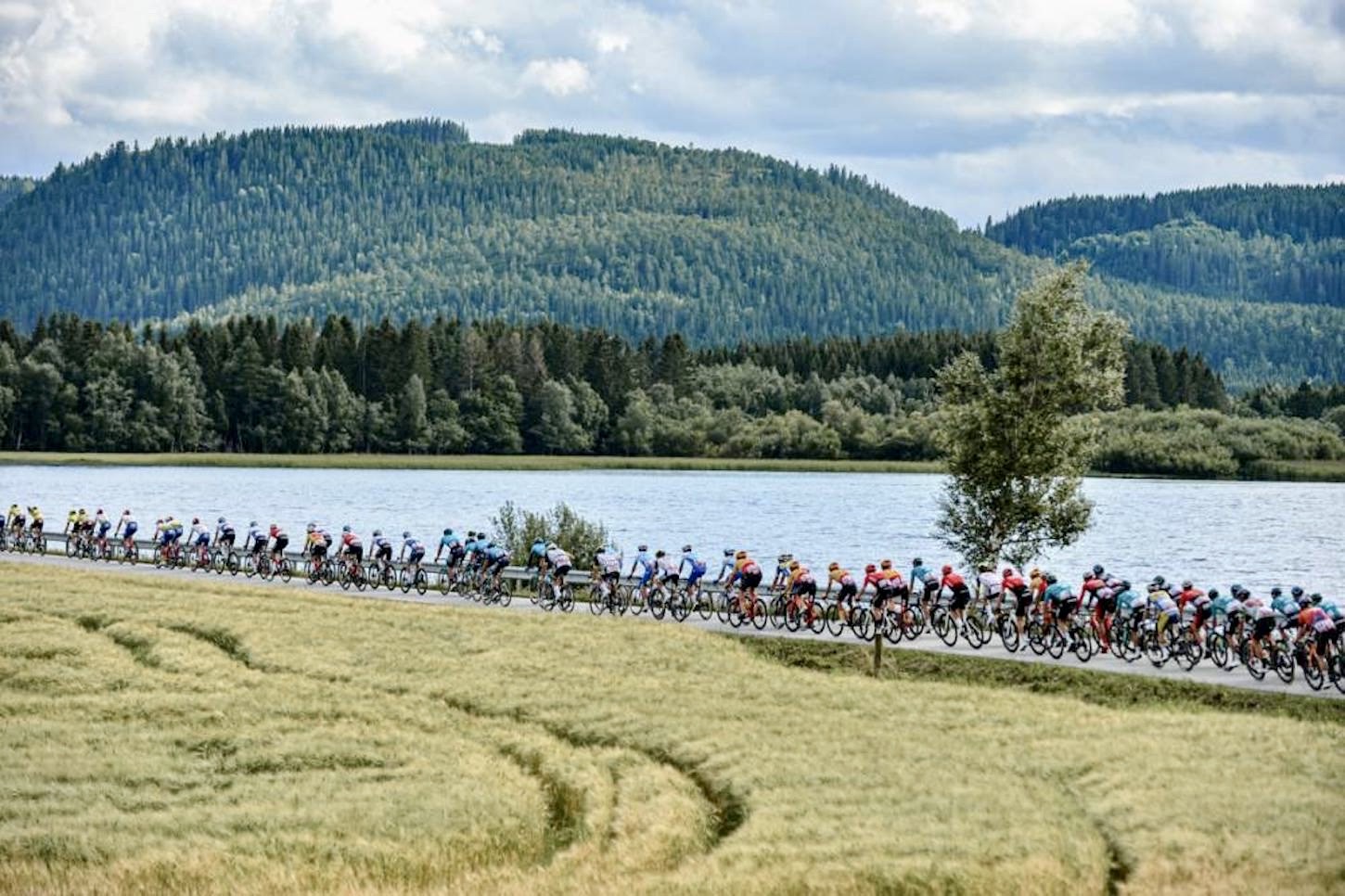 Victor Lafay had come to the Arctic Race of Norway with some unfinished business from last year, when he was third on the queen stage and the final GC of the Northernmost road cycling event. On this 2022 edition, though, the French rider has managed to triumph atop Skallstuggu to claim his second victory as a professional rider and the Midnight Sun jersey off the shoulders of his Cofidis teammate Axel Zingle. A group of eight riders led by Kévin Vauquelin (Arkéa-Samsic) and Hugo Houle (Israel-PremierTech) finished just 3” behind Lafay and will be his main challengers for the overall win tomorrow in Trondheim.

109 riders took the start on the 3rd stage of the 2022 Arctic Race of Norway, which covered 177,7 kilometers between Namsos and Skallstuggu, at 13:35. It was a fast start under a bright sky, and it took 11 kilometres for Taco van der Hoorn (Intermarché-Wanty Gobert), Maurice Ballerstedt (Alpecin-Deceuninck), Tom Wirtgen (Bingoal-Pauwels Sauces-WB) and Håkon Aalrust (Team Coop) to go clear as the two main contenders for the Peacock jersey, wearer Stephen Bassett (Human Powered Health) and runner-up Aaron Van Poucke (Sport Vlaanderen-Baloise), neutralized each other’s attacks to finally stay in the bunch. By the intermediate sprint in Namdalseid (IS, km 33,1), won by Ballerstedt, the breakaway had a 4’00” gap on the peloton driven by Midnight Sun jersey Axel Zingle’s Cofidis teammates.

Cofidis and TotalEnergies controlled the race

The race situation remained stable for most of the stage. Aalrust led the break through the Strugstad summit (Cat 2, km 85,8), where the advantage of the front group had increased up to 5’00”. TotalEnergies began contributing to the chase for the benefit of Mathieu Burgaudeau, who sat on second position of the GC behind Zingle. As the terrain got more demanding, the pace stepped up and, as a result, some riders began to dangle off the back of the bunch and the gaps narrowed down. Wirtgen was the first across the summit of Stene (Cat 2, km 126,4) and Aalrust led through Reinslia (Cat 2, km 139,5), where the break clocked a lead of just above three minutes.

The run-in to the final climb of Skallstuggu (Cat 1) was lumpy and featured two intermediate sprints on Levanger (IS, km 156,8) and Hojem (IS, km 163,9) won by Ballerstedt and Van der Hoorn respectively as the breakaway riders capitalized all bonus seconds at stake. Intermarché’s Dutch rider attacked with 15 kilometres to go and his acceleration was only matched by Alpecin-Deceuninck’s promising German rouleur, as Wirtgen and Aalrust were dropped back to a bunch where BikeExchange-Jayco had taken the reins. The front duo was reeled in by the pack just as the final 3,8-kilometer climb started. When the road began to pitch upwards, Andreas Leknessund (Team DSM) hit the afterburners to open a series of violent attacks from different riders. With 2,3 kilometres to go, Victor Lafay (Cofidis) put some daylight between himself and the rest of the bunch, that had split in a gazillion groups. No solid chase attempt was established behind Lafay, yet the French rider triumphed with just a few seconds to spare.