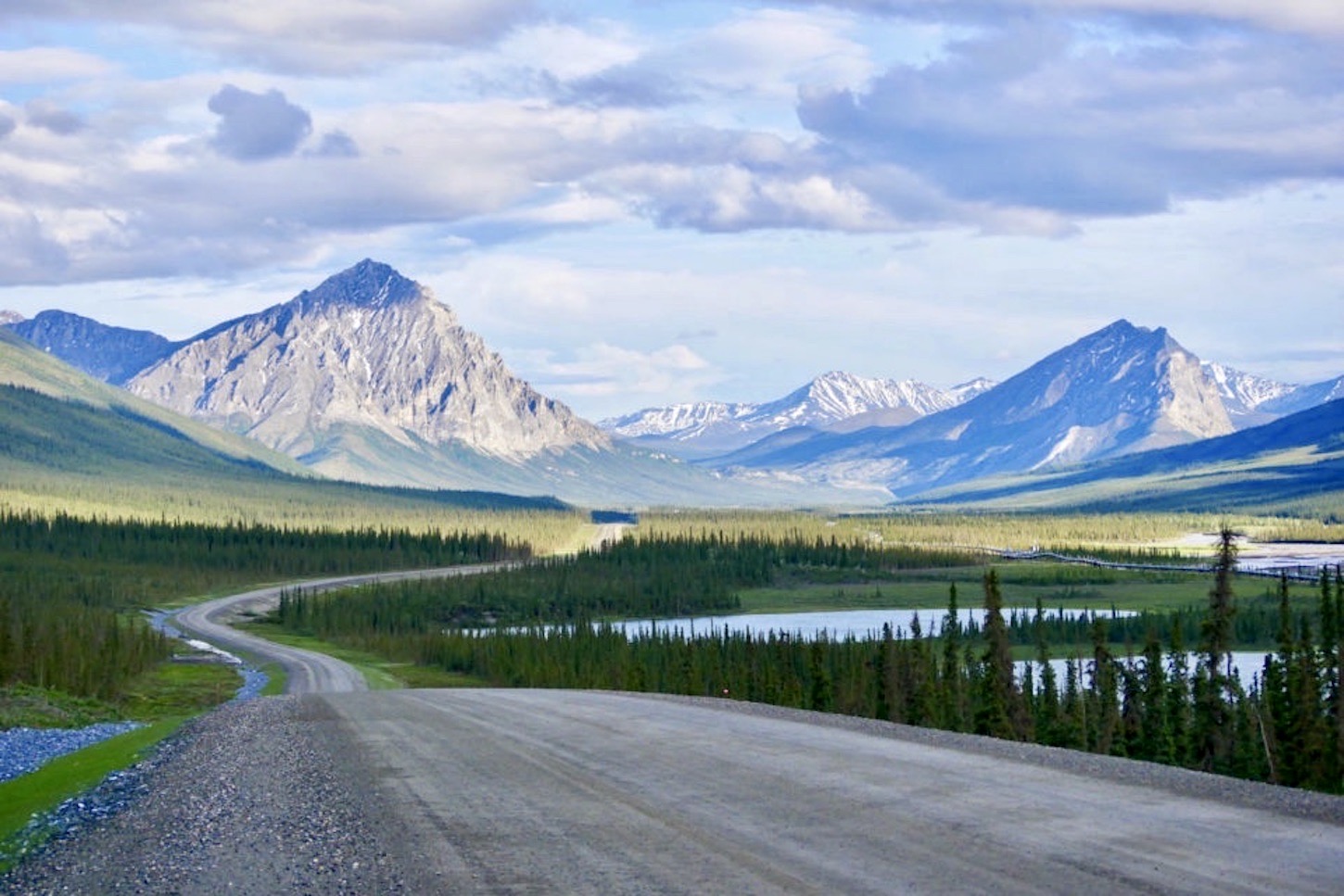 27 May 2021
By Lord Velo - In FEATURED ARTICLES, LATEST ARTICLES, VELOPATHIC

Despite being a relatively inexperienced bikepacker, Brett Woodward took a leap of faith and flew to the top of the world in Deadhorse, Alaska, for an unforgettable three-month ride back south

“How much longer you gonna be?”

“Alright, I guess I’m done then. Thanks.”

I grabbed my half-packed gear and wheeled my just-built bike out the door of the tiny airport in Deadhorse, Alaska. The woman in charge of closing the place down for the day wasted no time locking it behind me and turning off the lights.

To be fair, I shouldn’t have expected a warm welcome in the most unwelcoming place I’d ever seen. When our plane had dipped below the low-hanging clouds an hour earlier, there wasn’t much to look at. Just a flat, brown expanse dotted with snowdrifts and kettle ponds that dissolved into the fog.

I usually use bikes as a way to be irresponsible, but so far those carefree feelings were nowhere to be found. I was as far north as I’d likely ever be, and I was finding nerves much easier to come by. Fortunately, the first objective for my first big solo bike trip was simple enough: head south on the Haul Road.

The Haul Road ends (or begins) at Deadhorse, a work camp on the frozen banks of Prudhoe Bay, home to what has become the largest oil field in North America. From Prudhoe Bay on the icy shores of the North Slope, crude oil travels to the port of Valdez via the 800-mile Trans-Alaska Pipeline. The James Dalton Highway, more commonly called the Haul Road, is the 414-mile stretch of mostly gravel road that was constructed in 1974 to build and maintain the pipeline’s most northern section.

After a dark and difficult nine-month-long winter belonging mostly to truckers and oil field workers, the short summer season attracts curious visitors who are eager to experience the Arctic. For cyclists, the Haul Road’s appeal lies in the beautiful Alaskan terrain it traverses, as well as its status as the most northern road on the continent. As such, there isn’t much in the way of services between Deadhorse and the outskirts of Fairbanks nearly 500 miles to the south. Apart from a couple of truck stops where you can rent a room, grab a bite to eat, and charge your devices, cyclists will experience vast stretches of empty road and scenic vistas.

With my setup complete, I filled my MSR bottle with gas and picked up a can of bear spray and a reflective vest from the Prudhoe Bay General Store. I opted to rent a small room at one of the work camp buildings and leave camping in bear country for the following day.

Someone braver or more experienced would have slept soundly that night, but I was sufficiently intimidated by the task ahead of me. This was only my third bicycle-powered adventure of any real significance. The other two had been much less remote, and I had been able to share the daily decisions and laugh off the challenges with a partner. This time around the only one who would be able to solve the problems, create the motivation, and calm my nerves was myself. Overly dramatic as it may seem, the past few months had felt as though I was inching my way to the end of a diving board above a big plunge. I wanted to jump, although I didn’t really feel like I was the kind of person who would. This kind of thing seemed better suited for the people I followed on Instagram, not me.

The heavy fog had lifted by morning, and the light illuminated the landscape and my confidence with a new perspective. I took a short tour to the oil field to see the fossil fuel industry at work, and to touch the water that fed into the Arctic Ocean. I took my picture at the Prudhoe Bay sign, slapped my sticker up there with the rest, and started pedaling.

The first 70 or so miles south of Deadhorse are pancake flat. The road is often straight as an arrow, with the road markers on either side disappearing out into infinity. One of the only noteworthy events of the first day’s ride was when an arctic fox crossed the road in front of me. My camera was poorly packed, but its inaccessibility gave us a nice moment together, a short 10-second gaze before he resumed his important business.

My first “night” was spent overlooking the Sagavanirktok (Sag) River and thinking everything that moved was a grizzly. My only neighbors turned out to be a pair of curious young caribou and a small group of Musk oxen lounging on the river bank. It was a restless break under the midnight sun, but it felt good to have made some progress.

I spent the next day battling headwinds in the foothills and becoming intimately acquainted with my granny gear. I didn’t have a ton of experience with fully loaded gravel descents and it took some time to get used to the extra momentum and build up my downhill confidence.

You can finish reading about Woodward’s bikepacking adventure here.