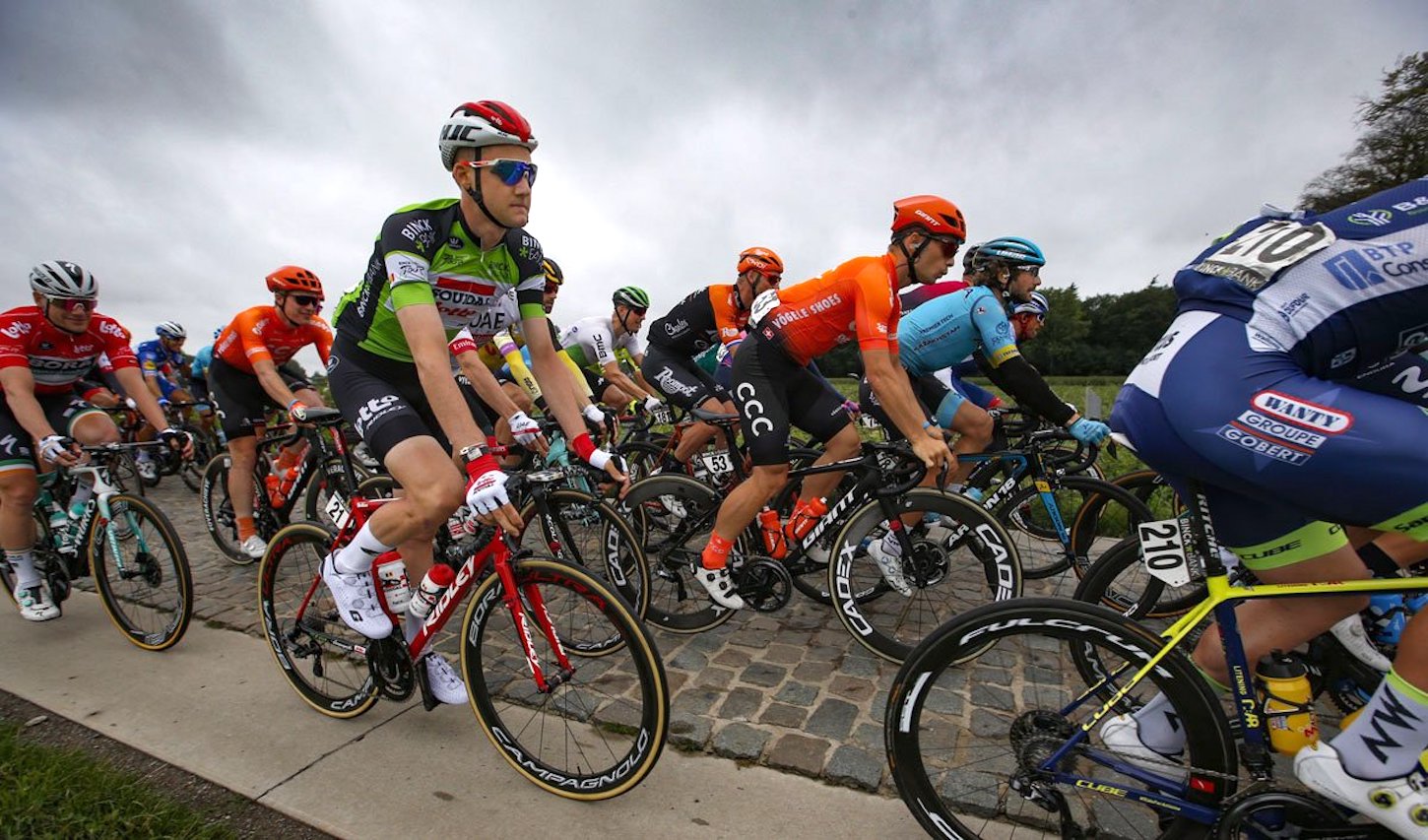 Laurens De Plus (Jumbo-Visma) snatched the overall victory from Tim Wellens (Lotto Soudal) in the BinckBank Tour today, after Belgian went on the attack during the final circuit of the Muur of Geraardsbergen.

De Plus surged clear along with Greg Van Avermaet (CCC Team) and Oliver Naesen (AG2R La Mondiale) just before the Bosberg climb, leaving Wellens isolated and unable to mark their move, allowing De Plus to sweep up valuable bonus seconds in the late Golden Kilometer sprints to secure the overall title.

Meanwhile, Naesen claimed the stage victory, after the Belgian rider came around Van Avermaet during the final dash for the finish.

The grand finale of the BinckBank Tour remained a closed affair in the early stages. The peloton maintained a strong pace in the first hour of the race, which sapped the enthusiasm of any breakaway specialists.

It was only after some 60 kilometers, in the run up to the Berendries climb, that eight riders managed to jump ship, including Mads Pedersen, Martijn Tusveld and Gijs Van Hoecke. On the Valkenberg another group responded, featuring Bob Jungels, Jack Bauer, Casper Pedersen, Marco Marcato, Zhandos Bizghigitov, Aimé De Gendt and Laurens De Vreese, who managed to bridged the gap to the front. The leading group of fifteen riders defended a slender lead of 30 seconds onto the local course with three ascents of the Muur van Geraardsbergen and Bosberg.

On the second climb of the Muur, Mads Pedersen cracked open the race with a piercing attack and dropped nine riders from the group. Bauer, De Gendt, Madouas and Casper Pedersen were the only riders who managed to stay with Trek’s Danish talent. Lukas Postlberger also appeared at the front before Deceuninck-Quick Step and CCC brought the peloton back ahead of the final climb of the Muur.

Stybar and Vanmarcke attacked, but ultimately it was Naesen who managed to break clear of the group of favorites. Laurens De Plus and Greg Van Avermaet also managed to pull away, with De Plus taking seven seconds in the Golden Kilometre. That was significant for the GC, with De Plus moving up to second just five seconds behind leader Wellens.

De Plus, Van Avermaet and Naesen joined forces towards the finish in Geraardsbergen while the pace halted in the chasing group, much to the despair of Wellens.

Van Avermaet, Naesen and De Plus quickly amassed 45 seconds, prompting Wellens and second-placed Marc Hirschi to attempt to close the gap themselves. The leading trio stayed ahead however, and on the uphill finish in Geraardsbergen Greg Van Avermaet started the sprint for victory from a long way back. Naesen managed to keep the Olympic champion’s wheel and ultimately pulled alongside to win the stage.

Laurens De Plus was third and did enough to dethrone Wellens and take the overall BinckBank Tour win.

Naesen jumped to second on the overall podium, Wellens dropped down to third after conceding 43 seconds. He just managed to hold off Van Avermaet for third by one second.