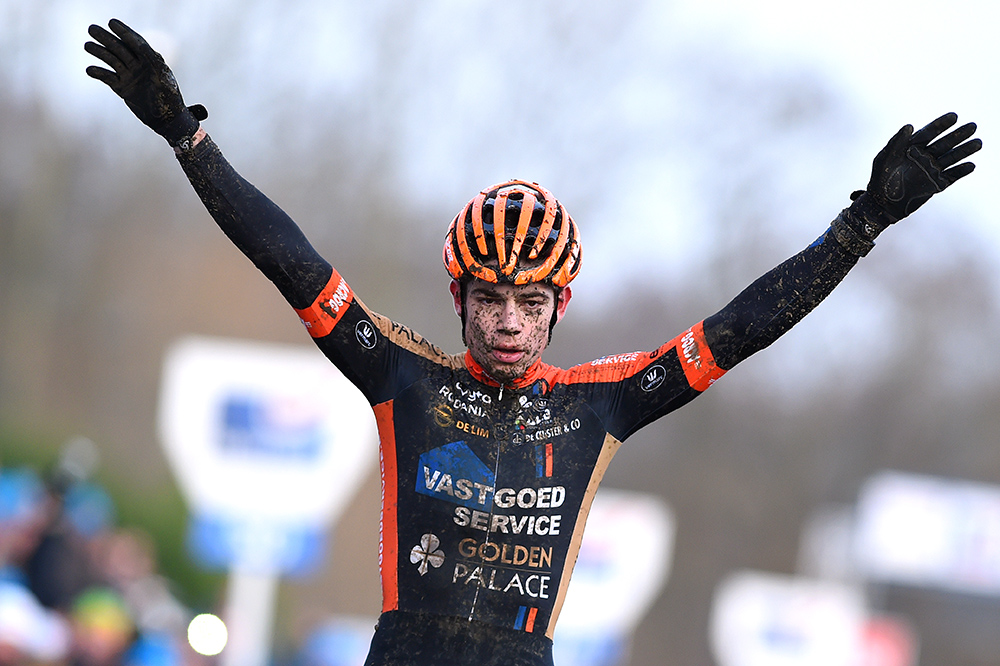 19 Dec 2015
By Gianni Pericolo - In LATEST ARTICLES, THE GREAT RACE

The unstoppable Wout Van Aert (Vastgoedservice-Golden Palace) claimed his fifth victory in a row today, after claiming round 5 of this year’s Bpost Bank Trophy cyclocross series in Antwerp, Belgium.

The young Belgian rider succeeded in distancing World Champion Mathieu van der Poel (BKCP-Corendon) during the final two laps to clinch a solo victory by more than 20 seconds. Meanwhile, Lars van der Haar rounded out the podium in third place, at just over half a minute behind.

“Of course I’m pleased with this victory. On a course like today it’s always going to be hard because you don’t know what to expect. Today the differences weren’t big. Only deep into the race when everybody was getting tired I was able to make the difference,” said Van Aert.

The key moment occurred just after the halfway point in today’s race, when Van der Haar went down in the mud, just as van der Poel was making a move up one of the short climbs.

As a result, Wout Van Aert was the only rider capable of following the world champion, with the Belgian duo quickly opening up a significant advantage over the chase.

“I was thrown to the ground in an odd way and my arm was blocked. I popped my shoulder half out of the socket, which hurt massively. I needed to sit down to get it back into position. Due to the adrenaline the pain quickly disappeared after two climbs but I was put at distance of course,” Van der Haar said.

Van der Poel then tried to distance his rival with a powerful uphill charge, but Van Aert was able to mark his move.

Van Aert then proceeded to initiate a move of his own, subsequently powering clear of van der Poel during a stretch of sand.

From there, Van Aert never looked back, steadily increasing his advantage during the final two laps – to seize the win by 23 seconds over van der Poel.

“It’s a section that suits me well. On the asphalt I noticed I had a good gap.”

With today’s victory, Van Aert extended his lead in the Bpost Bank Trofee series, and he now leads Pauwels by 4.08, with Sven Nys at an insurmountable 7.53 behind in third.

Despite having a poor start, Cant later came to the fore during the final two laps to be beat Helen Wyman (Kona) by a small gap, while Sophie De Boer claimed third spot on the podium.

However, it wasn’t long before Havlikova’s lead began to dwindle during the second lap.

Indeed, Harris later overtook the Czech rider toward the end of the second lap, while Wyman, De Boer, Van Loy, and Cant managed to sail past her as well.

Harris’ time out front did not last long either, as Wyman took the lead moments after they completed the second lap.

Meanwhile, Cant was steadily gaining ground from behind, as she continued to chip away at Wyman’s lead.

From there, Cant succeeded in charging past Wyman, just before the end of the fourth lap, as the British rider struggled in the sand.

However, Wyman was not quick to give up, as she eventually clawed her way back to Cant and retook the lead near the end of the sixth lap. But, a defiant Cant was not to be denied her victory, as she once again overtook Wyman at the start of the final lap.

From there, Cant put Wyman behind her for good, as she crossed the line eight seconds ahead of her rival, while De Boer rode home in third place at 20 seconds behind the winner.

As a result of her victory today, Cant now holds a 1:11 lead in the Bpost Bank Trofee series over Jolien Verschueren, who could only manage a seventh place finish in Antwerp.