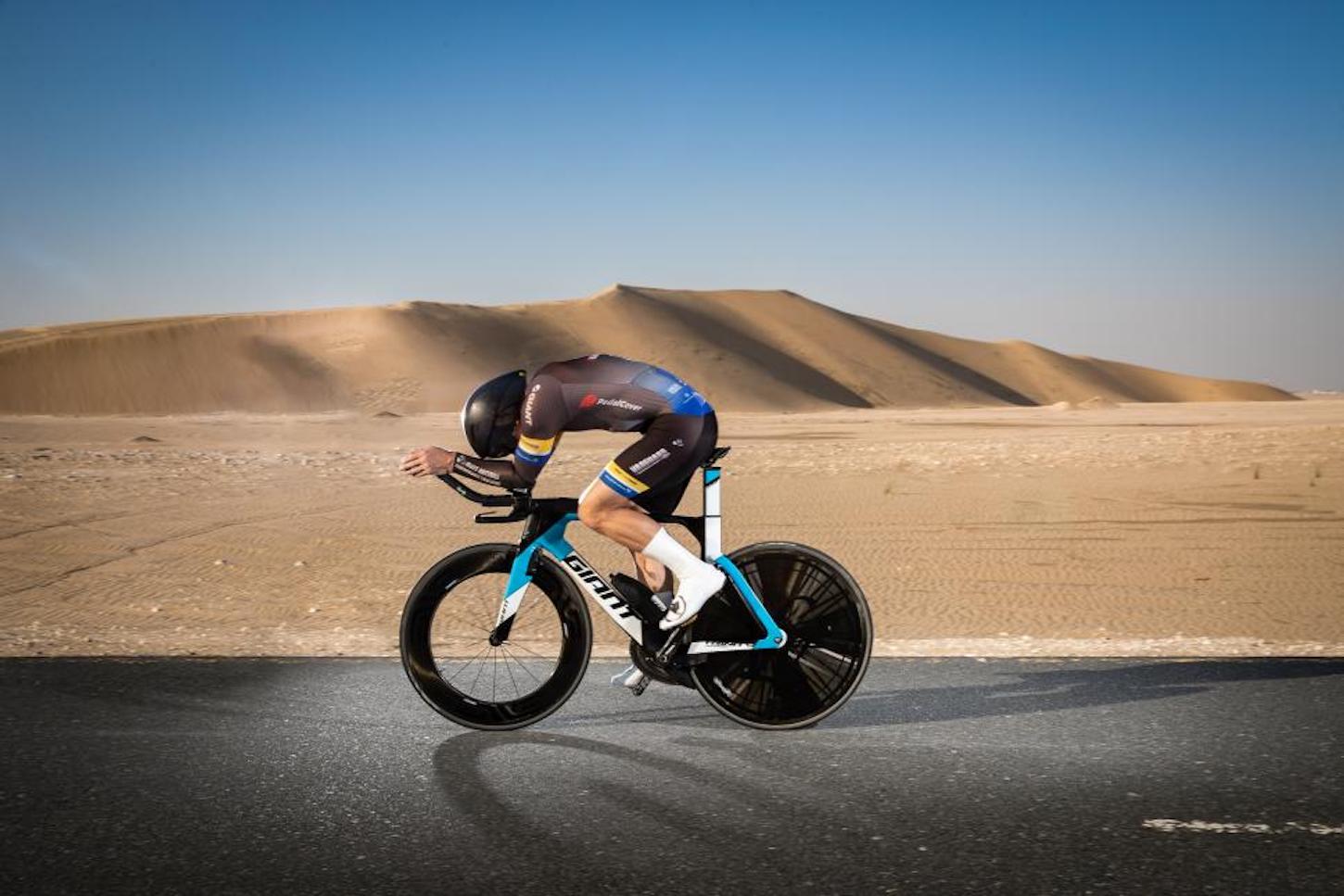 British cyclist Jonathan Parker broke the Fastest 100 Mile record last weekend, after covering the distance in 2:49:58 with an average speed of 35.29mph (56.8km/h) on an A-to-B course from the top of Qatar to the southern part of the country.

Interestingly, not only was this Parker’s first attempt, but he said that he “wasn’t trying for the record this time out.”

“I did the ride a few weeks ago on a road bike and it was super quick, so I planned to do a test run on the TT bike. The plan was to smash it until I fell apart, then go and analyze the data to see if the record was doable.”

“I didn’t even know I was going to do a test run until the afternoon before. I had been looking for good conditions, and the wind direction forecast changed on the Friday afternoon. I had done a few days’ training and a 100km ride the day before—not the best preparation!

Given his body weight of 174 pounds (79kg), Parker says he had to “dig deep” in order to maintain an average of 318 watts over 100 miles. “There was a horrible slow crosswind section where I really had to tuck in and push 390 watts for nine minutes.”

If the ride Parker uploaded to Strava is validated by the Road Records Association (RRA), it makes his feat eight minutes faster than the current RRA record holder Jonathan Shubert’s time of 2:57:58, which he set back on November 2, 2020.

According to the RRA rules, attempts at the current 25, 50, 100, 12-hour, 24-hour or 1000 mile record “may be made in any part of Great Britain provided that easily distinguishable landmarks shall be chosen for the starting, turning and finishing points”.

Despite having a home in the UK, Parker lives in Doha (Qatar).

“Given the size of Qatar, there wasn’t much choice of route. I had about 1.5 kilometers left at the end before I hit sand. Qatar is very flat, so there was no opportunity for a long downhill start and roads like the ones I used have very little traffic, so there was no being sucked along with the flow.”

“Looking at the data and pictures from the previous record, it appears that there was a long downhill section at the start, then a lot of cars en route. Without those, I wasn’t sure if I could beat the record. This was the main reason for the test run to gather data,” Parker explained.

Parker says a friend drove him to the start, and then followed him for the whole ride as support. “He had spare wheels, tools, etc. in the car in case of mechanical problems.”

While most of the roads leading to Qatar were quiet, Parker says he did experience a close call.

“At one stage a truck was overtaking me on a two-lane highway while another truck was trying to join my lane from a slip road. If the battery in my heart rate monitor was working, you’d have been able to see where that happened from the data.”

Parker broke the record while riding a Giant Trinity Advanced Pro TT bike that was equipped with a Pro tri-spoke from wheel and Aerocoach disc rear wheel, along with Speedplay aero pedals and an SRM power meter. However, Parker points out that apparel and gear played an equally important role.

“I’ve done a lot of aero testing (wind tunnels and track, plus using Notio to do my own testing), and clothing makes a big difference,” he said.

”There is a lot of attention to detail on drag savings given that over 100 miles at high speed, just 2-3 watts can make a significant difference. Small details to reduce drag include the use of Speed Skewers and taping the vents in the helmet, while other forms of drag were minimised through such means as coating the chain in melted PTFE powder and running the super low rolling resistance Veloflex Record 2020 tires.”

For gearing, Parker says he used a PCD oval single 58 tooth chainring, which he says is around the equivalent of 60t at the high points of the oval.

“I’m an old grinder. When I won the Qatar national championship TT in January, I averaged 78 cadence. On the really fast parts I was doing 105 rpm cadence – that’s unchartered territory for me and was a struggle.”

“A side effect was a lot of movement of the saddle causing sore bits after 40 minutes and getting worse as time progressed. It’s still sore to sit down a day or so after.”

On the issue of hydration and fueling, Parker explains, “I tend to calculate my nutrition quite carefully on all rides over an hour – to the point that friends laugh at me with my timers to remind me to take a gel. I used a mixture of sports drinks and gels that have a 2:1 glucose-fructose mix, as the body can oxidize more carbs per hour with fructose included as the GLUT5 transporter is engaged. I take 90g of carbs per hour and 600ml of fluid.”