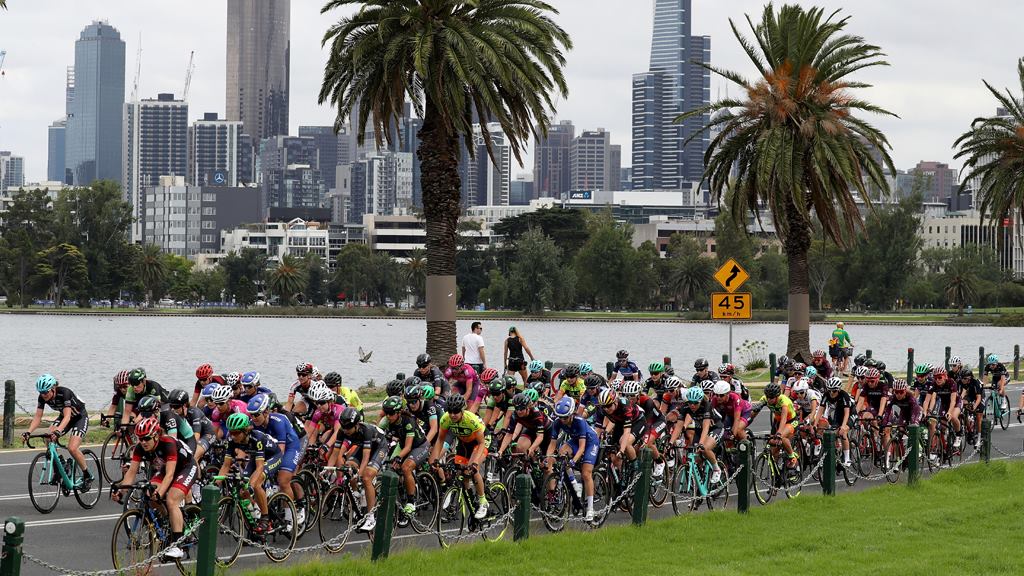 Bennett won the 116.6km race, made up of 22 laps of the 5.3km Albert Park circuit, beating Dutchman Danny Van Poppel from Team Sky, Australian Scott Sunderland of IsoWhey Sports and Belgian Edward Theuns of Trek-Segafredo in a bunch sprint.

Meanwhile, Orcs-Scott’s Caleb Ewan, who won four stages of last week’s Santos Tour Down Under, had to settle for fifth place.

“I’m extremely happy. To get the first win of the season is really nice and takes a little bit of pressure off,” said Bennett and then also thanked his teammates.

“They did a fantastic job and got me out of trouble in the last corners. I kind of lost a wheel and they sort of managed to get me in a great position [for the sprint finish]. It was a great day.”

Bennett, who raced the Santos Tour Down Under sprints strongly despite being unable to beat an in-form Ewan, said it helped that his team did not expend excessive energy in Thursday’s race.

“We kind of relaxed and let the race happen. We didn’t take control or force it. And if it came back to a sprint we were going to try to do something,” said Bennett, but still recognising Ewan’s class. “He was just a little bit unlucky. You see how fast he is. He is incredibly fast.”

“I would really like to do a result there. But I’ll just take it one step at a time,” he said.

Among the stars were two of the biggest grand tour names in Britain’s three time Tour de France champion Chris Froome (Team Sky), racing for the first time this season, and Colombian Esteban Chaves (ORICA-SCOTT) who last year placed second in the Giro d’Italia and third in the Vuelta a España and last Sunday finished second overall in the Santos Tour Down Under.

They rode comfortably throughout the race on a circuit that was not suited to their climbing strengths. Froome even tested his legs, chasing down two attackers with two laps to go.

The race featured two main breakaways, both of them strong in numbers and finally caught.

The first break of 15 formed on lap 3 and lasted for 30km until lap 6. It still got to contest the first of three intermediate sprints on lap 5 with Dutchman Bert Jan Linderman (Lotto-Jumbo) beating the Australian pair of Calvin Watson (Aqua Blue Sport) and Lucas Hamilton (Australia).

The break dropped to 15 riders but stayed away, despite the chase led by the Lotto-Jumbo and UnitedHealthCare teams seeing their lead whittled down from 55 seconds to 40s by lap 12.

That advantage was still enough for them to contend for the third intermediate sprint on lap 15 in which Vakoc won from Great Britain’s James Shaw (Lotto-Soudal) and Gate, the outcome ensuring that Vakoc, with two intermediate sprint wins, won the sprinters competition.

Soon after the third sprint, the peloton’s chase ramped up with IsoWhey Sports joining in with UnitedHealthCare and Sunweb in the effort; as did ORICA-SCOTT later.

The peloton’s chase was timed to perfection and it caught the leaders on lap 20.

Some riders made attempts to upset the apple cart, such as the move that Froome reeled in and another bid by Dane Lars Bak (Lotto-Soudal). But it was for nought on a course so flat and so fast.

Third from the 84 finishers was German Lisa Brennauer of German Canyon-SRAM Racing.

For Wild, of the US Cylance Pro Cycling team, it was her third win in Australia this year. She won stages 2 and 4 and placed third overall in the Santos Women’s Tour in South Australia.

But the 34 year-old 2016 UCI Road World Championship silver medallist had to throw everything into her final burst to beat Hosking who was on her left in the photo-finish.

Wild also knew Hosking, 26 and of the Italian Alè Cipollini team, had strong form. At the Santos Women’s Tour, she won stage three and finished first in the points classification.

“I pushed my wheel to the front, I was hoping for the photo finish,” Wild said after. “It turned out to be with me. We directly looked at each other, ‘Is it you? Is it me?’ We both didn’t know. I have been practicing [her wheel throw] for a few years … today it worked.”

Thursday’s Towards Zero Race Melbourne race that saw 85 riders finish, was set for a bunch sprint finish by the 10th lap of the circuit when the last break was reeled in by the peloton.

The early protagonist was the American UnitedHealthCare team that forced the pace during lap 3 and throughout the race had riders in various breaks.

But they were caught just before the first of two intermediate sprints on that same lap.

More breaks went after that sprint, but all were to no avail as the second intermediate sprint neared on lap 7. In that Winder won from Garfoot and Garner whose third place in it after winning the first sprint secured her the sprint competition.

The attacks still came, the first by Belgian Ann-Sophie Duyck (Drops), a three times national time trial champion. She stayed away into lap 9 where Great Britain’s Emma Pooley (Holden) caught her. But the peloton again reeled them, as it did every move to ensure a bunch sprint which was almost certain going into a headwind over the last three kilometers.