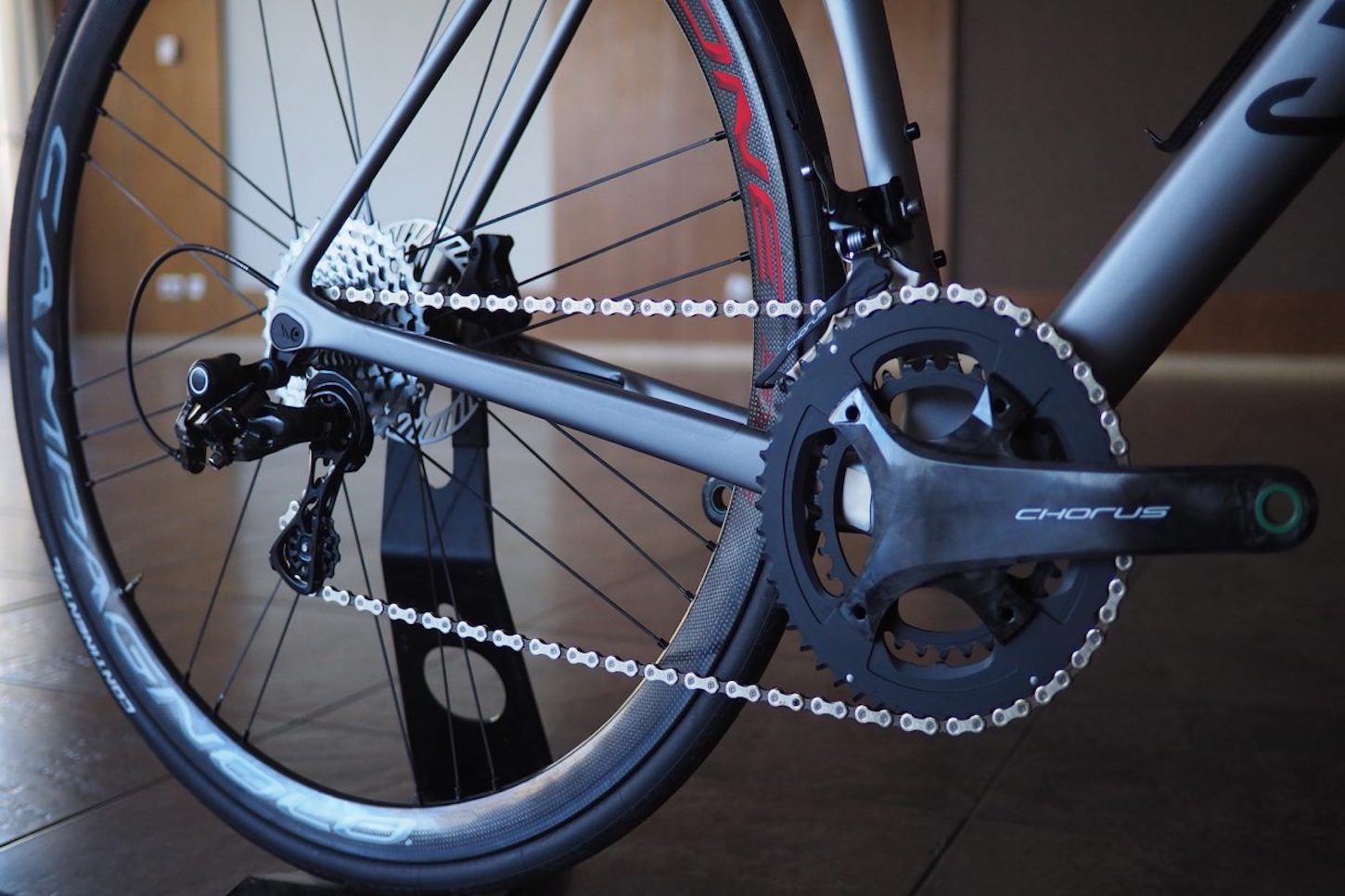 26 Apr 2019
By Gianni Pericolo - In LATEST ARTICLES, THE DOUBLE DIAMOND

Smoke has once again billowed from the stack in Vicenza, signaling Campagnolo’s launch of its new 12-speed Chorus groupset.

To the delight of Campagnolo disciples everywhere, the vaunted Italian brand has brought its latest 12-speed platform to the Chorus level, offering front and rear derailleurs that boast the same revamped design as their costlier Record and Super Record groupsets.

Indeed, the new Chorus rear derailleur features Campagnolo’s Embrace geometry, which they say provides more chain wrap and more consistent sprocket-to-pulley parameters across the cassette than ever before, as well as a single medium cage length that’s capable of working across all of the brand’s latest 12-speed cassettes. Moreover, just like its more expensive siblings, Chorus’ rear derailleur also gets the same UD carbon reinforced technopolymer upper and lower knuckles, while the parallelogram links and cage are made from forged aluminum.

In the case of the front derailleur, Chorus also has the same two-piece outer link as Record and Super Record as well, which Campagnolo says reduces the amount of free stroke at the lever for more responsive shifter action. However, in order to reduce cost, steel is used on the cage instead of aluminum and carbon fiber.

The new Chorus also receives redesigned Ergopower levers, which feature the same subtle changed in shape as Record and Super Record, as well as the same updated hoods and slightly larger thumb shifters.

In addition, the reach of the levers for both the rim and disc brake versions are adjustable in order to accommodate riders with hands both large and small.

However, unlike Record and Super Record, the brake levers are made of aluminum instead of carbon fiber. But, according to Campagnolo the Chorus’ internals have been kept on par with its big brothers.

Same for the new Chorus 12-speed chain, which keeps essentially the same elements as the top-tier groups, but with a less elaborate surface finish in order to further reduce costs.

Brakes for the new Chorus remain mostly the same on both rim-brake and disc-brake variants, albeit with an updated calipers for the rim brake set-up that are now able to accommodate wider rims and tires up to 28mm, while the hydraulic disc-brake version uses the same forged aluminum caliper bodies as found on Record and Super Record.

Campy enthusiasts will be pleased to know that the same 11-29T and 11-32T 12-speed cassettes offered with Record and Super Record will be available with the new Chorus, using the same single block of steel for the first six sprockets, while the remaining six individual sprockets are separated by machined aluminum spacers.

Interestingly, a new 11-34t cassette is being introduced with the new Chorus, offering a larger range of gears that’s no doubt aimed squarely at the gravel/roadplus segment.

However, Record and Super Record owners need not fret, as Campagnolo says that cassette will also work with them as well, with no changes required accept for a longer chain in order to accommodate the 34T sprocket.

The new Chorus crankset also retains the same unidirectional carbon fiber arm construction and proven Ultra-Torque split-axle spindle design as its predecessor, which will be available in semi-compact 52/36T, compact 50/34T and a new sub-compact 48/32T version with crankarm lengths offered in 165, 170, 172.5, and 175mm.

What does the new Chorus cost?