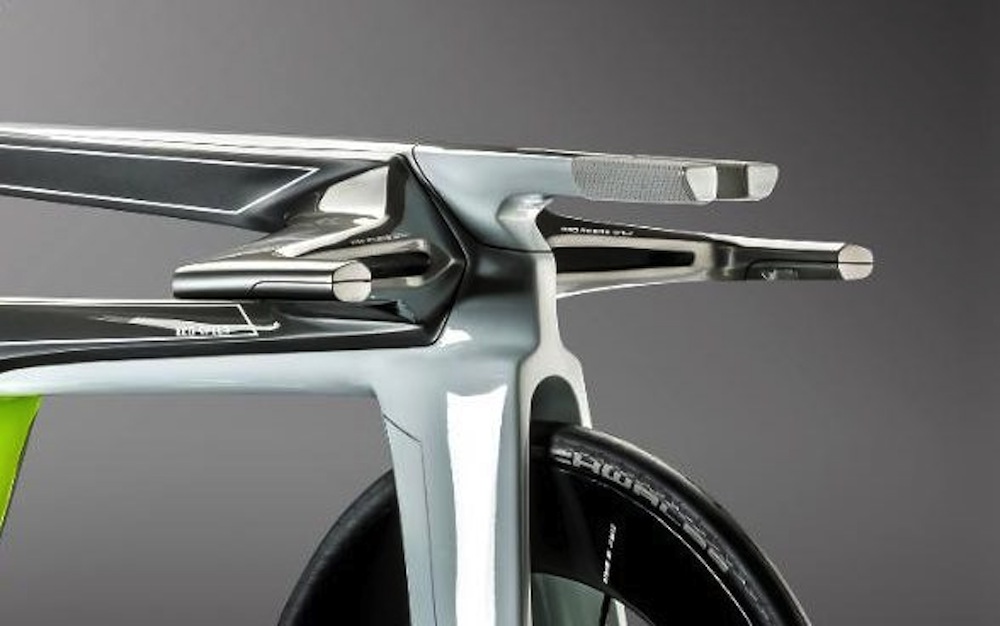 If industrial designer Alexander Forst has his way, Canyon’s hydrogen-powered Eco Speed eBike will be the bike of the future.

“By 2025,” explains Forst, “alternative propulsion technologies will form part of everyday life. The resulting advances in E-bike technology will make them one of the most popular modes of personal transport. This rise in popularity will constantly push manufacturers to drive their proprietary technologies forwards. And, in order to showcase their latest innovations, I expect the world’s leading manufacturers will compete for a place in the global eBike market. ” “This is the reason why the Eco Speed concept has been created.”

The Eco Speed concept bike first began life in 2014, when Forst started studying the future of e-bike design, and found Canyon a willing partner to help conceptualize his vision.

In sum, by mixing hydrogen and oxygen, the hydrogen fuel cell is capable of delivering 500 watts of power to the bike’s electric powertrain. According to Forst, this technology, combined with the latest in aerodynamics and componentry, brings a level of performance to the Eco Speed, otherwise unmatched in the realm of electric bicycles.

In fact, Forst foresees manufacturers developing e-bikes in the future, that are capable of achieving speeds in access of 60 mph, with power that  can last to 24 hours.

So, is a design like the Eco Speed the perfect conveyance for the future ? Forst enumerates its virtues.

“The marriage of deep section wheels and aero spokes gives the ideal balance between aerodynamics and weight. Because of the high speeds the bike will be racing at, this aerodynamic design is key as it helps to reduce local drag around the spokes.

“The Eco Speed is meticulously designed to be perfect for pure racing. With a top speed of 100kph, it is truly a racing bike for a racing track – achieving average speeds previously set only by motorcycles.”

“To reach these top speeds of 100kph plus, but ensure the rider stays in full control at any one time, we needed to equip the bicycle with slick, wide tyres. But, of course, this being a racing bike, the specific tyre selection completely depends on the profile of the individual race track. However, it is possible to fit widths of up to 35mm to the model.”

“The frame is obviously the main part of the concept. It perfectly combines comfort, advanced aerodynamics, aesthetics, and acts as the skeleton on which the innovative hydrogen motor can be mounted.

“We made the frame from a high grade carbon fibre – a state of the art grade of the material previously unseen in bike manufacturing. This gave us the necessary capabilities to build an extremely lightweight structure, but also the ability to focus and control where the bike would have to endure the most pressure and weight.”

“A possible event that the bike could take part in would be an endurance race – one which could potentially last for over 24 hours. And therefore, especially over a race that long, the rider will be required to take up many different positions on the saddle.

“Therefore, the Eco Speed’s saddle has been divided into two separate areas. The front of the saddle was designed for comfort, and allows the rider to hold an aerodynamically beneficial position for as long as he may want. The rear section is solid, and offers a level of manoeuvrability the comfortable part of the saddle could not.”

“The wing profile of the handlebars is fixed. A fully cased front side means that only the handles of the ECO Speed move during a turn and, unlike common time trail bikes, steering does not overly affect aerodynamics.”

“The powertrain of the ECO SPEED concept consists mainly of two components: The fuel cell, which contains an electric motor drive, and a hydrogen tank that supplies the necessary energy to the fuel cell. A tank mounted on the frame, containing hydrogen, reacts in a fuel cell with oxygen (from the air). The power produced here in turn drives an electric motor.

“The unit supports the racer with up to 500 watts of additional power, allowing the rider to ride at high speeds for a longer period of time. Hydrogen fuel cell technology is state-of-the-art stuff and is a low-cost and sustainable alternative to current fuel sources.

“I think that there will be strong demand for innovation in the future, and that the increasingly higher expectations of the consumer will compel manufacturers to achieve previously unseen breakthroughs in the field of technological advancement. I’m simply trying to get there first.”