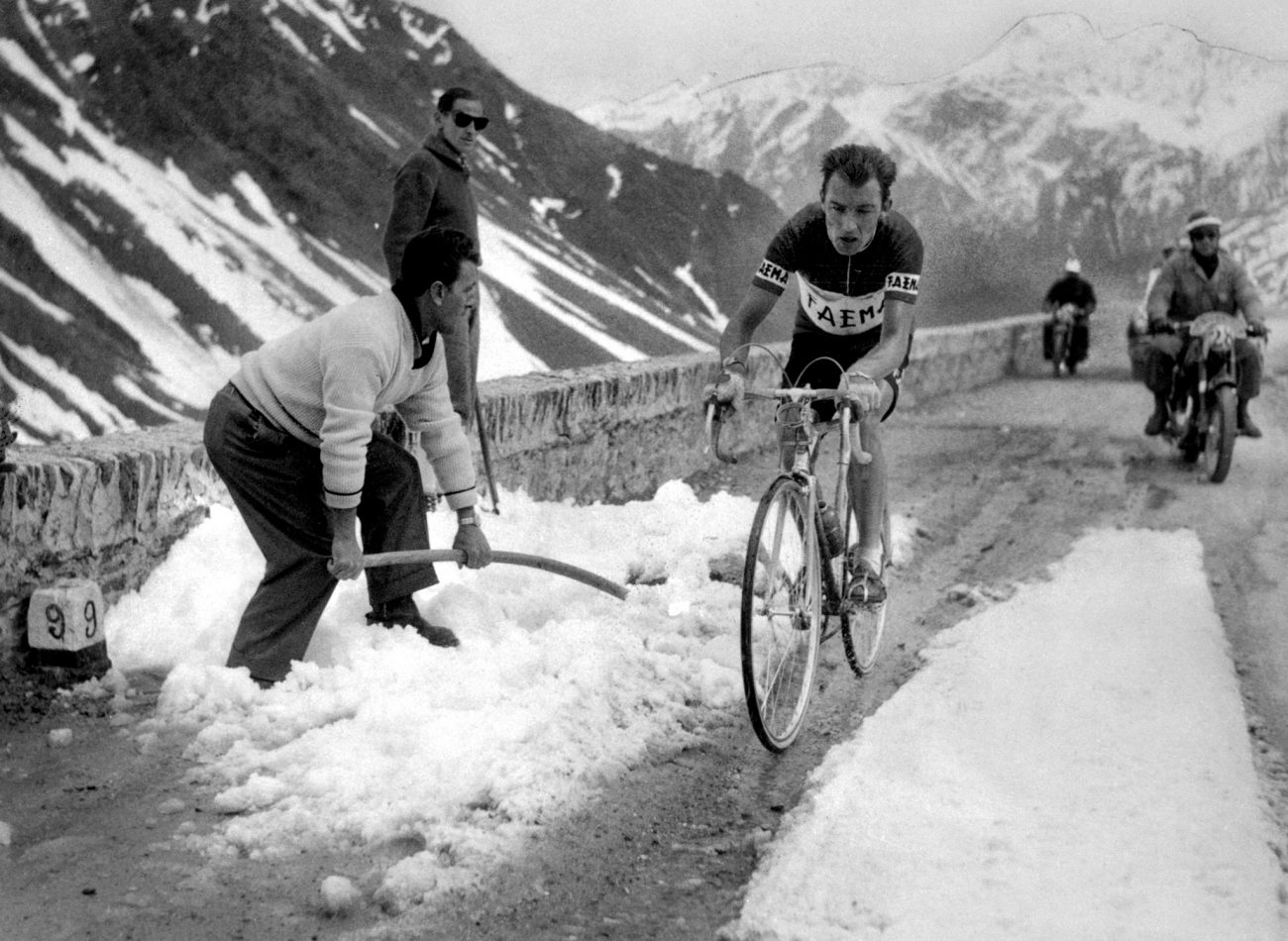 Known as the “Angel of the Mountains”, Gaul was the first non-Italian to win the Giro d’Italia twice, after winning the Italian Grand Tour in 1956  ahead of Italians Fiorenzo Magni and Agostino Coletto, and in 1959 ahead of Jacques Anquetil of France and Diego Ronchini of Italy.

He also won the 1958 Tour de France ahead of Vito Favero of Italy and Raphael Geminiani of France.

Gaul was born in Pfaffenthal, Luxembourg, and worked in a butcher shop and as a slaughter-man in Bettembourg before turning professional in 1953 at the age of 20.

Gaul possessed an unusual form on the bike, which was marked by a fragile-looking body, disproportionately short legs and a sad face.

“He had a sad, timid look on his face, marked with an unfathomable melancholy [as though] an evil deity has forced him into a cursed profession amidst powerful, implacable riders,” as one journalist put it.

Prior to turning professional, Gaul had already distinguished himself as a promising youth rider, winning more than 60 races as an amateur that included the Flêche du Sud and the Tour of the 12 Cantons and the famous climb of the Grossglockner in the Tour of Austria at just 17.

Gaul rode the Tour de France for the first time in 1953, but was forced to abandon on the sixth stage. He also started the 1954 French Grand Tour, but again had to abandon the race.

Gaul came to the French race the following year with new vigor, after winning the mountainous Tour de Sud Ouest and finishing third in the Tour of Luxembourg.

Gaul conceded a lot of time in the opening stages of the race, but he later fought back during the Alpine climbs.

It was during the first major climb from Thonon-les-Bains to Briançon that he attacked and dropped the Dutch climber, Jan Nolten.

Crossing the col du Télégraphe, Gaul had established a five minute gap over the chase, and by the top of the Galibier he had opened up an advantage of almost 15 minutes.

By the end of the stage, Gaul had moved up from 37th place to third spot on the podium. He was on his way to winning the next day as well, when he crashed descending in the rain.

He attacked again when the race reached the Pyrenees, winning stage 17 from (Toulouse to Saint-Gaudens) ahead of the eventual overall winner, Louison Bobet.

In addition to securing the final spot on the podium, Gaul also succeeded in earning himself the prestigious Mountains Jersey.

Gaul won a hard-fought victory in the Giro d’Italia the following year, winning three stages, including an eight-minute victory in the mountain stage from Meran to Monte Bondone near Trento.

Later in the season, he reprised his King of the Mountains title in the Tour de France. Gaul found himself almost half an hour down during the first six stages, but managed to close the gap in the mountain stages, which included an uphill individual time trial. Still, he only managed to finish in 13th place.

Gaul started the 1957 Tour de France, but abandoned after two days with no stage wins.

Gaul returned to win Tour de France the next year, after finishing third in that year’s Giro d’Italia.

He began with a dominant start, by winning four stages, three of which were time trials, including the ascent of Mont Ventoux.

His time of 1:2:09 from the Bédoin side, which in those days was cobbled for the first kilometers and poorly surfaced to the summit, stood as a record until Jonathan Vaughters beat it 31 years later in the Dauphiné Libéré.

On the last day in the Alps, Gaul’s team director, Jo Goldschmidt looked at the rain falling and woke Gaul with the words: “Come on soldier… This is your day.”

Gaul woke delighted at the cold rain and angry at the memory of how he had been denied the Giro the previous year, when he was attacked as he stopped by the roadside (see below). A lot of riders took advantage of his halt but he most blamed Bobet, a man as refined and diffident as Gaul was coarse and brusque.

His feelings for Bobet had turned to “flaming hatred,” said the historian Bill McGann. He sought out his tormentor before the stage started. The impact was all the greater because the two had barely spoken to each other since the Giro. “You’re ready, Monsieur Bobet?”, he asked, laying emphasis on the false politeness of the monsieur. “I’ll give you a chance. I’ll attack on the Luitel climb. I’ll even tell you which hairpin. You want to win the Tour more than I do? Easy. I’ve told you what you need to know.”

There was a prize of 100,00 francs at the top of the col de Lautaret in memory of the race’s founder, Henri Desgrange. The Dutch rider Piet van Est won it, with Federico Bahamontes behind him.

A small group broke clear on the descent and had eight minutes on the rest. Gaul began the chase and shed rider after rider, including the Spaniard, Salvador Botella, who held eighth place.

Botella stopped, covered his head in his hands and wept. Teammates turned back to encourage him; he burst into tears again when he saw them and climbed into the race ambulance. Meanwhile, Gaul and Bahamontes dropped the rest.

At first, the rest thought that Gaul had lost too much time earlier in the race to be a threat, that he was looking only at the best climber’s prize. But on the climb to the col de Luitel Gaul dropped Bahamontes as well. He was within three minutes of the leaders at the top, with Bahamontes a minute behind. Gaul took the lead and moved ahead as the race progressed through “a curtain of water, a deluge without an ark”, as L’Équipe described it.

Michel Clare, reporting for the paper, said, “I was on a motorbike and I had to stop at Granier for a hot grog. I was so cold that afterwards it was an hour before I could start writing.” When he finally began his report in the press room at Aix-les-Bains, he wrote: “I remember only a curtain of rain. A deluge without an Ark. The caravan dissolved from the moment it entered the sea of clouds that followed the pretty chalets of [the ski station of] Chamrousse. Now we know what it means to be ‘soaked to the bone.’ I thought of Jacques Anquetil, whose face was becoming more and more triangular and yellow. I thought of them all, the known and the unknown, sailors carried away by the flood and who tried desperately to avoid being shipwrecked. One man escaped from the storm. Charly Gaul. Finally, his time had come.”

Gaul crossed the line at the lake in Bourget-en-Aix in near darkness with a slight smile, 12:20 ahead of the chasing group and 15 minutes ahead of the leader, Raphaël Géminiani.

This moved him to third place, and two days later Gaul got those 67 seconds and more in a time-trial on a difficult circuit at Châteaulin, riding at 44.2kmh.

There, he beat even Anquetil, who was suffering a lung infection after the rainy ride to Bourget-en-Aix.

In the ensuing years, Gaul finished 12th in the 1959 Tour de France, but managed to win a stage in the Pyrenees in Grenoble, while Bahamontes claimed the overall victory.

Gaul missed the Tour de France the following year, but came in third the next season, after again winning the Pyrenean stage in Grenoble again.

At the beginning of the final stage he was second to Anquetil. Guido Carlesi attacked as the Tour entered its final kilometer, overcoming a four-second deficit to Gaul. This moved him to second, relegating Gaul to third.

In 1962 he finished the Tour de France with no stage victories. The following year marked his final race, dropping out without winning any stages.

Leading up to that, Gaul claimed his two Giro d’Italia victories. His victory in 1956 came after dropping the peloton during the climb to Monte Bondone at 1,300 meters.

Snow fell and Gaul found himself alone with 88 kilometers to go. It was so cold that he had to be carried off his bike at the finish.

During his stage victory to Courmayeur he took a 10-minute advantage over Anquetil on the final two climbs. However, Gaul lost the 1957 Giro after stopping for what was described in French papers as “a natural need” on the road to Trieste.

His rivals, particularly Bobet and Gastone Nencini attacked. Gaul was upset at a breach of race etiquette and still more annoyed to find himself referred to as Monsieur Pi-Pi (pee-pee).

Gaul responded to Bobet by saying, “I will get my revenge. I will kill you. Remember I was a butcher. I know how to use a knife.”

Upon his retirement, Gaul moved into a small hut in a forest in the Luxembourg Ardennes. Legend has it, that he wore the same clothes every day – patterned green trousers, studded walking boots and a sweater or jacket – and went walking with his dog, Pocki.

He had a telephone but never answered it. He removed his name from the phone book. His rare excursions were to buy everyday goods and shopkeepers who met him spoke of a man who was ill and depressed, that he hadn’t recovered from separating from his second wife.

When journalists found him to ask more he confirmed he was distressed but declined, saying “I’m sorry but it was all so long ago. Please leave me in peace. I’m just an old grumbler.”

He would appear now and then anonymously beside the road during the Tour de France, unrecognizable with a “beard, straggling hair and a paunch.”

However, his isolation finally came to an end in 1983, when he met his third wife, Josée, during the 25th anniversary of his Tour de France victory.

He later moved in with her in a home in the south-west suburbs of Luxembourg City.

The Grand Duchy of Luxembourg recognized Gaul’s legacy and his return to society by offering him a job as archivist at the sports ministry.

There, said Philippe Brunel, “he could go back into the past, put together day after day, scrupulously, the puzzle of his life, looking for why this need to escape from society.”

The organizers of the Tour de France invited him in 1989 as their guest when the race started in Luxembourg. He made his first public appearance there, with his daughter, Fabienne. He received the Tour de France medal from the organizer, Jean-Marie Leblanc. He attended a reunion of former Tour winners when the centenary race was presented in October 2002.

Gaul also made appearances as a race dignitary for many important events throughout Europe.

Gaul died of a lung infection two days before his 73rd birthday, after falling at his home in Itzig.