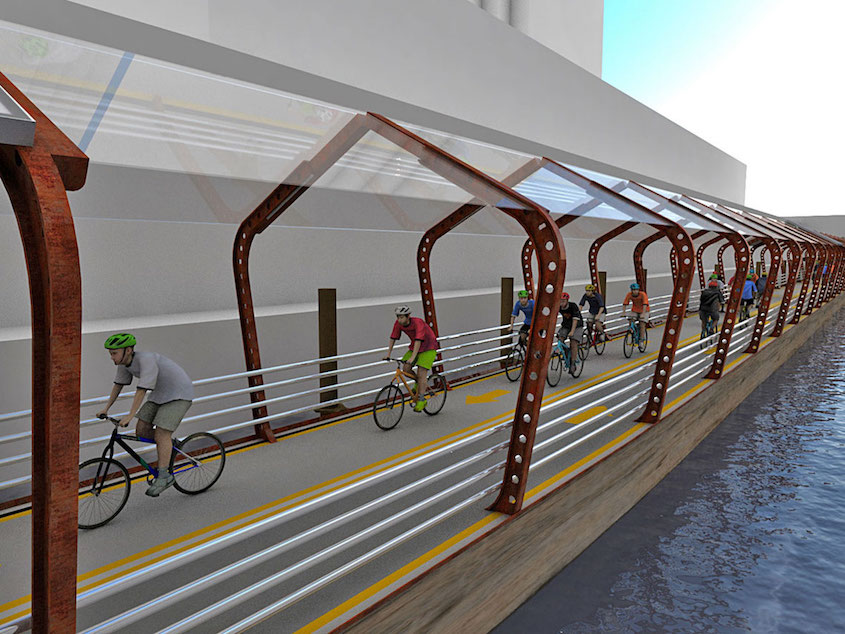 For a city that’s often depicted as being mired in violence and political scandal, Chicago has proven to be one of the nation’s more progressive cities when it come to cycling infrastructure.

Indeed, over the last five years, Chicago has added upwards of 100 miles of new bike lanes, and by 2019, planners hope to add another 50 miles of “better” bike lanes, including lanes with curbs to protect riders from motor vehicles.

However, the Windy City’s most ambitious plan, is to undertake a project that would add with a series of floating, solar-powered bike paths along the edge of the Chicago River.

The architecture firm behind the project is SecondShore, which views the river as a viable way to expedite transportation for the workforce, tourism and commerce.

“You look at the river, and while it used to be the main commercial artery in the city, it’s not much of one anymore,” says entrepreneur James Chuck, cofounder of SecondShore. “This fits with the mayor’s general economic strategy for the city—how do we make use of latent infrastructure?”

The floating bike paths, called the RiverRide, would give people on bikes a truly car-free place to ride for part of their commute, and then connect with existing bike lanes. The system would fill gaps in the network, creating around a 17-mile stretch of continuous bike paths and connecting 28 neighborhoods.

Floating on concrete pontoons, the paths would use solar power for lighting. Solar panels could also heat the surface, so the path doesn’t get icy in the winter, and run retractable awnings that roll out to protect riders when it’s raining or snowing. Furthermore, at key points, the path would connect with bridges, so cyclists can cross over to the other side of the river.

In addition to streamlining transportation, the project could also show a boost in local production, as the RiverRide is made from steel-reinforced concrete which could be produced locally.

SecondShore hopes to run a pilot project in Chicago’s 33rd Ward by the end of 2017, giving cyclists a chance to experience a half mile of a basic iteration of the path, and giving the designers feedback on the system.

The firm is currently working on how to build support for the idea. If all goes well, they will begin installing segments as early as spring of 2018. The final path, with 6 to 8 miles of floating pontoons, would connect more than 20 miles of Chicago.