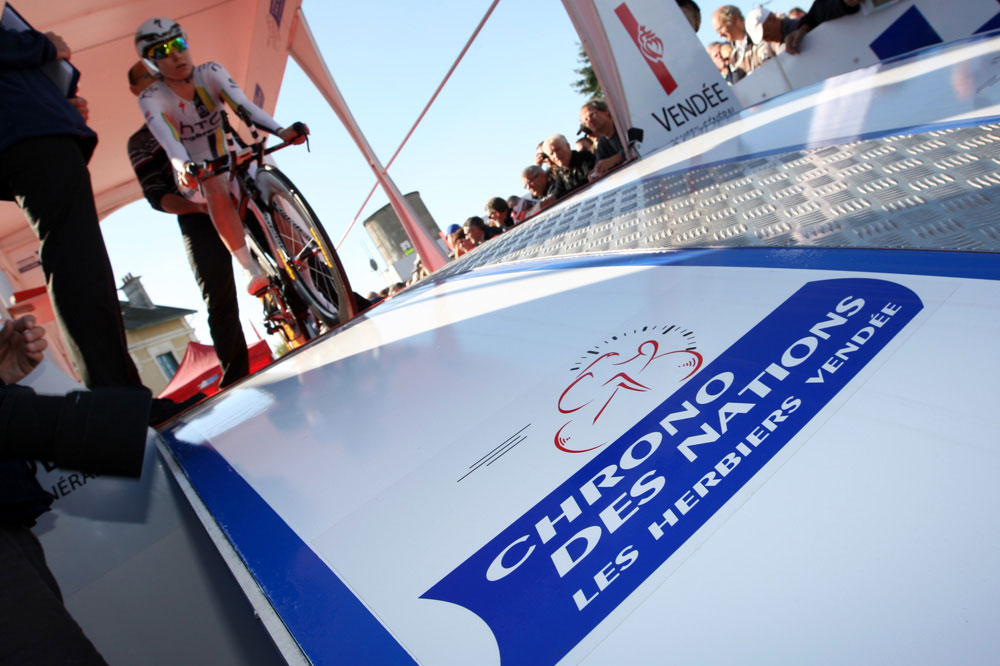 18 Oct 2015
By Campionissimo - In LATEST ARTICLES, THE GREAT RACE

Kiryienka took an impressive win at last month’s World Championships in Richmond, Virginia, and paid honor to his rainbow jersey today, after covering the 51.53 kilometer course in a time of 1.04.36, beating Marcin Bialoblocki (One) by 1.12, while Johan Le Bon (FDJ) had to settle for third, at 1.37 off the pace.

The 34th edition of the Chrono des Nations time trial was held around the city of Les Herbiers, with a mix of rolling terrain and short climbs that generally suited to the “powerhouse” riders.

Sander Cordeel (Vastgoedservice), was the first rider across the line, stopping the clock in 1.08.26, followed closely by Plychronis Tzortzakis (Greece) who slipped into second place.

However, Cordeel’s time on the hot seat was short lived, as Olivier Pardini (Verandas Willems) crossed the line in 1.07.40 – just minutes later.

But, the Belgian leader hadn’t even caught his breath, before he was beaten by Daniel Westmattelmann (Kuota-Lotto) – who posted a time of 1.07.24.

From there, Westmattelman’s time proved to be much harder to beat, as the next series of riders came in with times that were significantly off the pace.

Indeed, it wasn’t until Johan Le Bon (FDJ), that Westmattelman was finally knocked from the leader board, as the French rider powered across the line in 1.06.13 – to shave more than a minute off of the previous best time.

Following Le Bron, the race saw another slew of riders fail to beat the mark.

But, all eyes then shifted to Bialoblocki, who proceeded to post impressive intermediate time checks, which ultimately toppled Le Bon’s time by 25 seconds.

That left just three riders on the course – Movistar’s Jonathan Castroviejo and Adriano Malori, along with Kiryienka.

However, the Movistar duo’s performances both fell far off the mark of Bialoblocki’s time, while Kiryienka went on to surpass the Polish rider’s time by more than a minute.