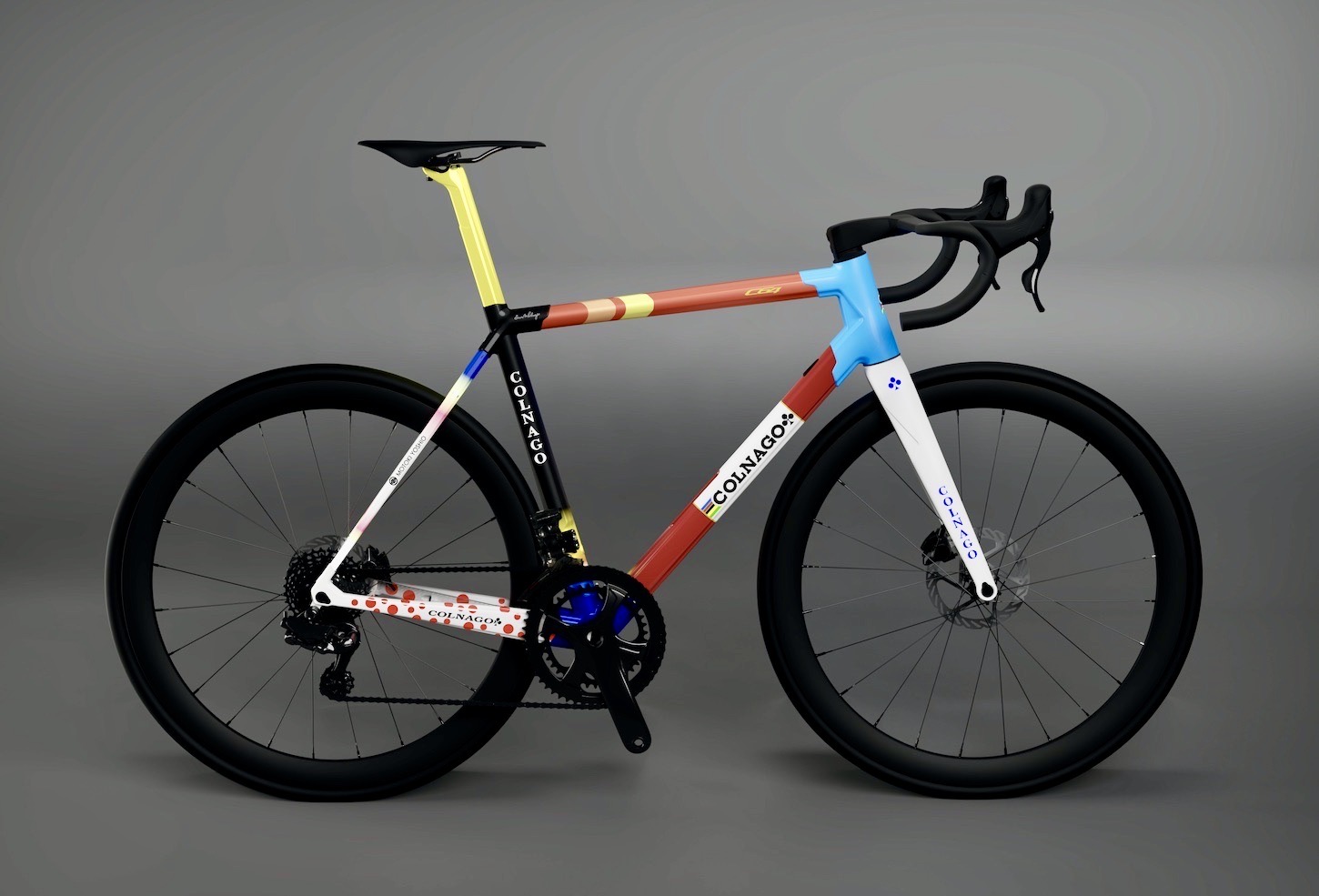 06 May 2021
By Lord Velo - In FEATURED ARTICLES, LATEST ARTICLES, VELOPATHIC

Colnago has announced, it will be auctioning eight of its historic bikes using digital NFT (Non Fungible Token) and blockchain technology, the first bike brand to adopt this new monetary system.

“Colnago has a history of almost 67 years, during which it has demonstrated its ability to innovate and propose new technologies that have subsequently become commonplace. The first NFT bicycle is no different,” he said. Manolo Bertocchi, Colnago Marketing Director. “We have developed a digital C64 that is a celebration of some of our most significant bikes and major victories in our history, including the first carbon bike and the first concept bike with internal drivetrain. The coolest thing is that the C64 NFT will never be produced, because it will be digital only. “

NFT art gained worldwide notoriety in 2021, when one of the world’s leading auction houses sold an NFT artwork by digital artist Beeple for a record $ 69 million. Luxury brands such as Gucci, Ferrari and Dom Perignon have since announced their intention to create certifications of their products using blockchain technology as well.

The auction will open on May 11 with starting at € 5,515 (the suggested retail price of a Colnago C64 frame kit with custom paint) and will close on May 25.

The Colnago C64 NFT will be auctioned on the OpenSea platform at this link: https://opensea.io/accounts/colnago.

The eight Colnago models mentioned in the C64 NFT include the “Concept” (1988) developed with Ferrari Engineering and featuring a frame with carbon fiber lugs and an internal gearbox; the C35 Crono TTT bicycle (1994) which featured a 20 inch front wheel to improve aerodynamics and a V3Rs (2020) which was used by Slovenian champion Tadej Pogačar to win last year’s Tour de France.

The Concept is a futuristic bike, the first conceived in collaboration with the Ferrari Engineering department. It could boast some innovative features including: the carbon fiber frame with conjunctions, the gearbox integrated in the crankset with selector on the down tube, the three-spoke carbon fiber wheels, the extendable stem and the braking system with hydraulic cables . A futuristic bike: it was created in 1988.

This frame descends directly from the Carbitubo and features the diagonal two-tube solution printed on the titanium. This part already split from the head tube (on which it is welded) to arrive spread out on the bottom bracket. This solution was designed to minimize the effects of lateral flexion-torsional stresses that are triggered during pedaling, improving performance and driving stability. Abraham Olano won the 1995 Road World Championship on this bike.

On 13 July, during the stage of the Tour de France, from Morzine to Saint Jean de Maurienne, Anthony Charteau is the first to pass the Col de la Madeleine and wear the polka dot jersey of best climber. At the end of the seventeenth stage, the last mountain, he remains at the top of the special classification, ensuring the final victory. In his honor, a C59 in a special color is made for the last stage of Paris.

It is a bicycle with a carbon fiber monocoque frame, designed and developed in collaboration with the Ferrari Engineering department and presented on the Fiorano circuit. Designed to be extremely aerodynamic, it boasted a very small 20-inch front wheel. This choice was made to allow the four riders to reduce the space of the train and make the most of the effect of the wake. The quartet of Italy wins the gold medal of the Team Time Trial Quartet at the World Championships in Palermo in 1994.

It can be considered as an experimental frame, in the sense that Ernesto Colnago made it using different criteria in the production of the tubes. The third version (this one) has the oblique and diagonal tubes crossed by two veins. A bicycle with this frame was driven to victory in the 1982 Road World Championship by Beppe Saronni at Goodwood and, later, also at the Giro di Lombardia, Milan-Sanremo and Giro d’Italia in 1983.

The bike with which, in 1994, Tony Rominger achieved the Hour Record on the Bordeaux velodrome. Entirely made of steel, the frame was made using vertically squashed, highly aerodynamic Oval CX type tubing, as well as incredibly thin fork sliders. The 26 ”front wheel, smaller than the rear one, allowed the rider to maintain a favorable position at high speeds with his arms extended and elbows tight. The front crown, a unique handmade piece, had 60 teeth.

The special edition V3Rs with custom coloring created for Tadej Pogačar’s victory in the 2020 Tour de France. The Slovenian rider won the last edition of the Grande Boucle thanks to a superlative time trial in the penultimate stage in which he inflicted heavy gaps on his opponents. He thus appeared totally dressed in yellow in the last stage on the Champs-Elysees street circuit in Paris.

The frame that anticipates the future: joints and carbon fiber tubes joined by gluing, a technology that allows you to create a “tailor-made” full carbon frame, with all the advantages of modularity. There are three conjunctions: steering, saddle and bottom bracket shell. The rear dropouts are made of light alloy. The C40 boasts many firsts in the world of racing: it was the first bicycle with a carbon frame to have won the Paris-Roubaix (Ballerini, 1995), followed by four other editions until 2000, once again with Ballerini, two with Museeuw and one with Tafi.