Contador Stays in the Giro d’Italia Despite Injuries 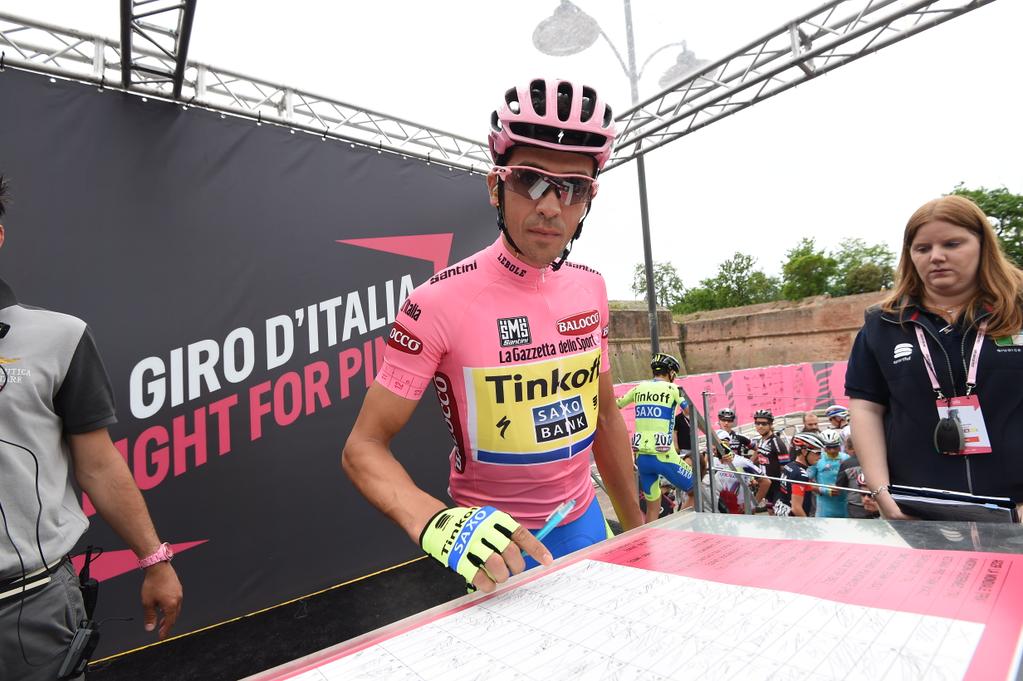 Despite dislocating his shoulder in a crash during yesterday’s stage 6 of the Giro d’Italia, race lead Alberto Contador has decided to start today’s stage and press-on.

Contador’s team said in a statement issued last evening, that a medical examination had confirmed he had dislocated his shoulder, and a further assessment would be made this morning.

The Spanish rider was present at the sign-in ahead of today’s 264 kilometer stage to Fiuggi, and confirmed on Twitter that he would start the stage.

“I feel pretty well, not counting everything that happened,” Contador told reporters before the stage. “What is important is to have a strong head otherwise it’s hard to even get on your bike and go.

“I hope that I can pass this long day and that my shoulder gets better and doesn’t cause me any problems. My morale is good; I just want to make it through this stage.”

Contador looked to be in pain, as he stood on the podium to receive his ceremonial maglia rosa after yesterday’s stage, declining to put it on during the celebration.

“There’s no tendons torn or any fracture, so it’s pretty good,” said team doctor Pete Daniels. “We just have to make sure he doesn’t make certain movements.

“Normally when it’s the first time, the risk of dislocating your shoulder again is not that high – it’s only when you have a repeat dislocation that it becomes easier to come out again.”

Yesterday’s crash occurred just as the sprinters were opening up their sprint in preparation for what was building up to a stage finale. Contador was among several riders who fell in the chaos. Although yet to be officially confirmed, it is alleged that the crash was caused by a spectator with a long camera lens leaning over the barriers at the road side.

“You know you have the three-kilometer rule, so they are safe there, but of course if there’s no crash and there are gaps, then they are still not safe because they lose time,” Tinkoff sports director, Steven De Jongh said while sitting on the curb next to the bus waiting for updates on his team’s star.

“You always want to have your leader in a place like the top 40, but of course, crashes still happen and you fall too. There’s no trick, you just have to keep you’re eyes open and hope for the best. [Crashes like this] unfortunately happen too much.”

Contador fell as a result of Colli’s crash in the final kilometer of the 183-kilometer stage from Tuscany from Montecatini Terme.

“It was a good final stretch, not really that dangerous, but we know that anything can happen,” two-time Giro winner and Contador’s team-mate, Ivan Basso said.

“There’s no clear rule to keeping safe, also you saw that the crash was in the first positions. You just need a big dose of luck when you are GC riders trying to make you’re way through. I just hope Contador and the others are OK.”